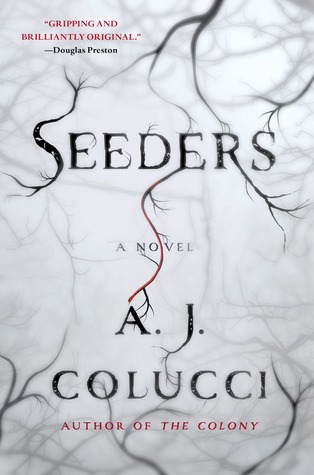 George Brookes is a brilliant but reclusive plant biologist living on a remote Canadian island. After his mysterious death, the heirs to his estate arrive on the island, including his daughter Isabelle, her teenage children, and Jules Beecher, a friend and pioneer in plant neurobiology. They will be isolated on the frigid island for two weeks, until the next supply boat arrives.
As Jules begins investigating the laboratory and scientific papers left by George, he comes to realize that his mentor may have achieved a monumental scientific breakthrough: communication between plants and humans. Within days, the island begins to have strange and violent effects on the group, especially Jules who becomes obsessed with George’s journal, the strange fungus growing on every plant and tree, and horrible secrets that lay buried in the woods. It doesn’t take long for Isabelle to realize that her father may have unleashed something sinister on the island, a malignant force that’s far more deadly than any human. As a fierce storm hits and the power goes out, she knows they’ll be lucky to make it out alive.
A.J. Colucci masterfully weaves real science with horror to create a truly terrifying thriller, drawing from astonishing new discoveries about plants and exploring their eerie implications. Seeders is a feast of horror and suspense.

If you were to take The Shinning and The Ruins, and mix it with one of those Sci-Fi original B-movies (not the good kind like Sharknado, but the kind that acting is so bad that you have to change the channel after the into), that would pretty much be what the book it.

I am a firm believer in the “if you don’t have anything nice to say, don’t say anything at all”. With that in mind, I will keep this very brief and two the point.

This books had a lot of potential. It is really is like The Shinning in terms of locked away on a remote location where people go crazy, and it is like The Ruins in terms of plants as the monsters. Those two things right there make a great combination, but A.J. Colucci must have added a little bit too much salt the recipe (for me at least), because I didn’t like the taste.

The story itself just felt so predictable and thing. The characters were all stereotypical, one-dimensional, and often felt very inconsistent to me. To be completely honest, it was a struggle to get through this book. I kept waiting (and hoping!) that the book would get better, but it just didn’t. Then by time I realized this was not what I was looking for – the book is so short I just figured I might as well just finish it.

What was cool to me, was when science and biology behind on the island would be explained, but again it just felt short. Not because i was wrong, but there just wasn’t enough. I wanted so much more elaboration of what exactly these plants were doing or at least just mention the science behind them more. Enough is explained that you understand perfectly how and what is going on, but if you give me a story about a genetical engineered anything, I personally am going to want details and hard science about it.

What I find so ironic about this book is that I actually read the first preview chapter of this, and I hooked it me in! (You can read it here). The plot and summary of the book was awesome – I am sucker mutants plants I guess – and then that preview felt just as a good. But damn me, it was just like The Happening all over again.

I can definitely see people liking this book though. The authors writing isn’t bad at all, and premise behind the story is interesting. I suppose if you have an afternoon to kill, and in the mood for a simple b-grade horror book, you could enjoy this. Personally, this book just wasn’t to my taster. It was just different… from what I had expected going in. I wanted a little more