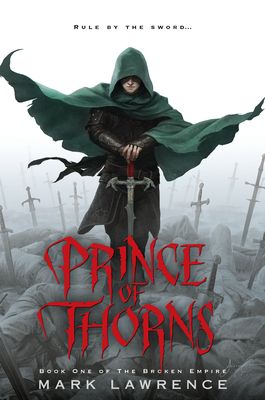 When he was nine, he watched his mother and brother killed before him. By the time he was thirteen, he was the leader of a band of bloodthirsty thugs. By fifteen, he intends to be king…It’s time for Prince Honorous Jorg Ancrath to return to the castle he turned his back on, to take what’s rightfully his. Since the day he was hung on the thorns of a briar patch and forced to watch Count Renar’s men slaughter his mother and young brother, Jorg has been driven to vent his rage. Life and death are no more than a game to him-and he has nothing left to lose.
But treachery awaits him in his father’s castle. Treachery and dark magic. No matter how fierce, can the will of one young man conquer enemies with power beyond his imagining?

This was an all-around great novel. It has unique, interesting, and flushed out characters. A fascinating world that kept wanting to learn more and more about. And a great plot that will take a left turn, and hook you in.

First I guess I should start with the rape scene at the start of the novel. Like many others, one of the first things I heard about Prince of Thorns was that there was a rape scene within the first couple of pages. I had also heard that this book and the series was considered very grimdark. With that in mind, and how upset some people where about there being rape, I was expecting something rather graphic and disturbing to place. Well, it honestly isn’t bad or hard to read at all. There is rape, which is extremely horrible, however Mark doesn’t linger on it or even go into the slightest detail. It is merely a passing moment where a characters says he is off to find the farmer’s daughter. Thats it. Thats the end. No screams, no descriptions of actions taking place, just a few lines of what the character will do. You shouldn’t have any difficult reading through it.

As for the rest of book, yes, this was grimdark! I mean just dark, brutal, at times disturbing, and so descriptive –  it was amazing. I just felt so thrown into the world and was completely immersed and mesmerized with all of the characters. And that fascination with characters was what brought me more into this world, and gave the plot a deeper meaning to me.

Jorg is amazing, and I love his character. I dare say one of my favorites I have had the privilege to read. It is not the actions that I like about Jorg – those a very disturbing, dark, and twisted, and I can easily see why people would have problems reading this and not like him. For me though, what makes so Jorg amazing is why he does everything.

The story is told from Jorg’s first-person perspective, and it was an excellent choice. Reading Jorg’s thoughts about why he did something, what he was thinking about, and how he was thinking it – that was made reading this book great. As the story goes on you being to learn more and more about Jorg, and his past. As more of his personal story unfolds, you begin to realize why he does the things he does, why he believes in certain things. He is not just some cold blooded 13 year-old (yes, he is only 13!) psychopath, there is a reason and event that caused him to be like he is. Once you learn more of his story, you may reevaluate how you feel about him.

The others character a great as well. Little Rikey, Marik, and the Nuban; to name a couple of my other favorites. I have to give a mention to Mark’s prose as well. I was a big fan. Then the plot too. It really did take me surprise. I thought it was good to start, nothing special, just some boy trying to regain the castle from his father. But as the story goes on, and we learnt more about Jorg’s past, and start to see more of the world we are in, I realized it wasn’t going in the direction I believed and was more, much more, that what I had expected.

Don’t let my lack of talking about the plot, proves, other characters, or anything else as a bad sign. I got so caught up with Jorg, that really, he is all I want to talk about (He is that awesome!) I really have nothing negative to say at all.

I wouldn’t recommend this to everybody, dark fantasy is not for all, but if you are a grim dark fan, or someone like me, who is a suckers for getting to know your character’s on a deeper level, then you have to pick this one up.

6 thoughts on “Book Review: Prince of Thorns by Mark Lawrence”