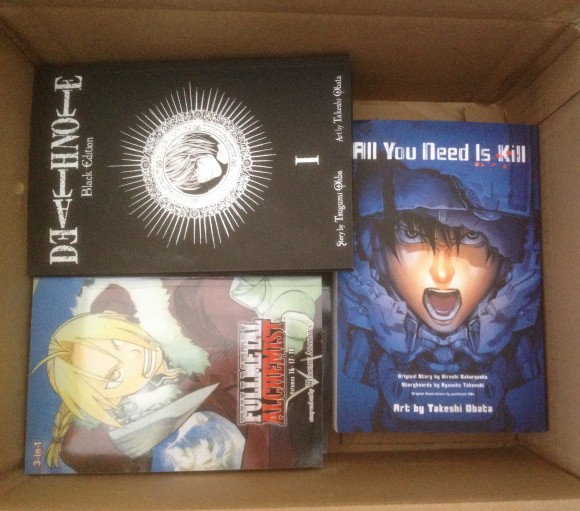 Talk about manga-mania! Lately I have started watching a TON of anime. Last weekend I watched all of Kuroko’s Basketball, and now I’ve started working through Magi: The Labyrinth of Magic. It so happened that at the same time, B&N was having a ‘buy 2 get a 3rd free’ on all Viz Media. Obviously, I took advance of that situation…

One anime I used to LOVE to watch in high school was FullMetal Alchemist. Since then, I had not really watched or the given the show that much thought. A couple of years ago, I started watching it again on Netflix, and those old feelings came rushing back and then last year I finally picked up the manga (it was my first manga ever!). Thought it was great and I had a blast reading it!

I already own chapters 1 to 12 (in the 3-in-1 editions, that puts me up to vol 4), and being on this anime-train, I decided now was the time to finish my collection. Unfortunately, the next chapters I need to need are in Vol. 5 and you can see, I bought from 6 on. This is because they were out of stock of Vol. 5! 😦 I am going to start again from chapter 1, then hopefully by the time I get to vol 5. it will be online again, or I will just go check around in some local stores.

I saw The Edge of Tomorrow in theaters last year and thought it was pretty good. Then when I found out it was based on a book. Being a reader, I naturally wanted to check out the book. I think that they had the book and graphic novel for sale too (not really sure thinking back), but this was strictly manga!

I have heard the movie, book, graphic novel, and manga are all slightly different, so I’m excited to see how the manga story differs from what I saw.

I had originally intended on getting the 5 volumes of FullMetal and All You Need Is Kill, but the one missing FullMetal meant I only had 5 books in my cart. I have a long list of manga series that I am interested in, and Death Note is right at the top of the list. While it would be to cool to read Magi while I watched it, that manga in not all out in English, and I really want to check out Fairy Tail, but that has an absurd number of volumes to it, and too big a commitment for me. Death Not on the other hand, is complete and only has 6 volumes in the black edition. So, if I end up liking it, the series is already done (Yay! No waiting!) and it won’t be too expensive to buy the rest.

I’m pretty excited to get started on these. Soon as I finish up the last book of the Riyria Revelations, I’m going to start working my way through… probably throwing a few volumes in, between each novel I read.

Is anybody else watching Kuroko’s Basketball, Magi, or another anime?

Thoughts on the All You Need Is Kill manga or have you read the Death Note before?

Maybe there is another manga series you reading?

I needed a space to line things up