Backlist Burndown is a monthly meme hosted by Lisa from Tenacious Reader where you put aside at least one book from your blacklist every month to read, and then post a review of it on the last Friday of that month. Luckily for me, 93.75% of all books I read are from my backlist 😛 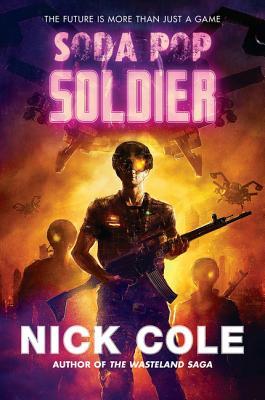 Gamers! Put down that controller and pick up this book!

Call of Duty meets Diablo in this fast-paced, action-packed novel from the author of The Wasteland Saga.

Gamer PerfectQuestion fights for ColaCorp in WarWorld, an online combat sport arena where mega-corporations field entire armies in the battle for real world global advertising-space dominance. Within the immense virtual battlefield, players and bots are high-tech grunts, using drop-ships and state-of-the-art weaponry to wipe each other out.

But times are tough and the rent is due, and when players need extra dough, there’s always the Black, an illegal open source tournament where the sick and twisted desires of the future are given free rein in the Westhavens, a gothic dungeon fantasy world.

And all too soon, the real and virtual worlds collide when PerfectQuestion refuses to become the tool of a mad man intent on hacking the global economy for himself.

This book was not at all what I expected to be. Going in, I was expecting some kind of mixture between Video Game High School, where e-sports basically replace the popularity of present day sports, and Sword Art Online, where video games feel more like life than a game. Well, yes, I did indeed get that, but what I did not expect – and was pleasantly surprised about – was what else this book had to offer. It was more than just merely following around the life of a pro-gamer in need of money.

PerfectQuestion is a pro-gamer playing for team ColaCorp. They are battling it out in the the FPS game WarWorld against WonderSoft for advertising rights. It has been long months of  losing battles for team ColaCorp, and it appears than now WonderSoft may in the position to finally beat them once and for all. If this does happen, it will be the end of PerfectQuestion’s pro-gamer status, and his only source of income.

Outside of the gaming world, Perfect is also in serious financial difficulties. Due to the losing of his team, money is thin. He is far behind on his rent, and his girlfriend in this close to just walking out on him. Perfect knows that if he doesn’t come up with a win next game, or some kind money soon, it will be the end of his career, girlfriend, and home.

He makes a decision buy into the Black – a highly illegal online gaming network where serious amounts of money can be made, but where some things that are flat-out dark, twisted, and disgusting can be found. It is in here, that Perfect finds himself in a position, one would not expect from a video game.

Perfect will have to survive the demons of the Black, the gun-fire of WarWorld, and where both these game cross – the real world.

A major strength this novel has, is how genuine and real Perfect felt as a gamer. It was very akin to how I feel when I’m playing. Staying up late, forgetting to eat, and just losing myself in the game and forgetting the real world completely. How Perfect appears to feel playing these, like one is a game while the other one feel like life, I thought was very appropriate as well. In the FPS Perfect is playing a marine, but in the MMO he becomes his character.

WarWorld is essentially Call of Duty, and reading it, it felt like Perfect was playing a FPS. The voice chatting with other teammates, selecting the his load-out, and using gamertags instead of names. In the describing of the gaming environment, Nick points out how the terrain is computer generated, and even the gun battles themselves (which are good) feel like they are part of a game-fight, rather than a real-life fight.

The Black on the other hand – I figured it would be something along lines of online poker (betting money per match) but in Diablo gameplay. You do pay per match and it is basically like playing a Diablo-esq MMORPG, but it is so much, so so much more than a game. Just like when you play an MMO or a RPG, at some point you get so invested in the game and world, with your character, and other players there, you almost forget that it is a game, and that this virtual world you are in isn’t real. Essentially what you are doing in just living out a second life in a fantasy world, but to you, this ‘game’ feels real. This is part of what the Black represents, and is where I found the story had more to offer than what the synopsis lead me to believe.

There is stuff in there, the Black, that doesn’t feel like a video game, nor would you expect to see in one. It raises some moral, ethical, and even psycho/sociological question. We do not delve deeply into them, but they are found. The world that this novel takes place in, it is not the present, but some near-distant future, where some event happened, and games now have the capabilities to do these things we find in the Black. I don’t want to explain and ruin what Perfect encounters in there, but it is not just a video game.

This brings me to my main dislike – we don’t learn enough outside of the gaming world. The video game world-building is great, but this future we are in, seems so fascinating and mysterious, but we never completely learn how it came to be or how things fully work. This is because the story is told from Perfect’s point of view – a gamer.

As a gamer, what are you focused on? The game. Now what if a person is gamer, has a full-time job playing video games, and to get more money, needs to stay up to the crack of dawn in the morning playing more games? Well, you get someone who is focused on, and consumed by video games almost 24/7.

This is a double-edged sword for me. I like it because it exaggerates and really draws on what it is like to play video games. That staying up until the crack of dawn and get lost in their world. To use them to escape, and forget about everything else. Points for that. BUT tell me what has happened to the world, and show me some feelings Perfect! You’re about to lose your house, and already got dumped by your girlfriend, but never once do you give her more than a passing thought here and there. Every time it comes up, Perfect just goes back into the game.

The conflict I face with this is that I do like it, because it is true to his character as a gamer, but bugs me as a reader, because I want more of his personality with these issues, and to hear what else is going on his head. The “problem” is, Perfect’s personality just isn’t one who cares about those things. It’s a flaw, but all characters have flaws. If Nick had chosen to delve more into the state of the world as it is now, and Perfect’s situations with females, it may have improved the depth of Perfect’s character, but it could have ruined it too. I think it may have taken away from the emphasis of him as a gamer, and shifted what the focus of what the story was on. This is one of the issues that can arise from a single POV through a story though.

Another thing I would like to point out is the WarWorld gun fights. They are fast, intense, and entertaining, but I found them – all except one – to be a little drawn out at times. I myself am not a big military fight or COD fan so maybe that’s why? (Although I LOVE Unreal Tournament 2003 and TF2). The one fight I was glued to, had to do with a certain 70’s/80’s horror & sci-fi film. That fight had me stuck in my chair! (If only Colonial Marines had been as good… 😦 )

This story also contains quite a few easter eggs, such as that movie, so be on the lookout for them. And speaking of eggs, Nick Cole has some of the tastiest, and most mouth-watering descriptions of food I have ever read! There is this shake, and a burger, and this croissant… just wait until you get to them! And from a conversation I had with Nick on Twitter yesterday, “[the burger] is a high performance version of one that you can get at Unami Burger.” I’ve never been there before, but they look GOOD, and if they are just half as good as the one Nick describes in the book… next time I go through NYC I’m making a detour!

Now, do I recommend this? Yes*. If you are gamer, I have no doubt that will thoroughly enjoy this story, have a fun time with it, and appreciate it to its fullest, being able to see the deeper meaning of what the Black represents. Also, if you are into military fiction, you may enjoy this as well. A lot of the story takes place in gun-fights on the battlefield in WarWorld. If you aren’t into either of the two, then the lack of real world, and our main protagonist being the only POV and such a focused gamer, may turn you off…

I was impressed with this novel, and how well Nick was able to represent some aspects of playing games and the video-game culture. No-doubt, Nick gave me more than I had expected. I think there are going to be some sequels (pretty sure I heard that on the AISFP podcast – could be mistaken though) so maybe in them we might learn more of the real world and see Perfect developer outside of a gamer? If there are sequels, I will be picking them up though.

I am extremely tempted say a must-read for all gamers! You’ll have fun with this! (At least read the preview).

Do you have any favorite video games? Few of mine are Diablo 2, Star Fox 64, and God of War.