Book Review: Murder As A Fine Art by David Morrell 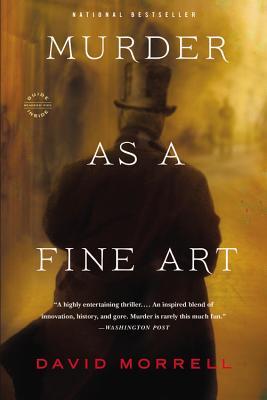 From the first chapter, I was addicted.

Gaslit London is brought to its knees in David Morrell’s brilliant historical thriller.

Thomas De Quincey, infamous for his memoir Confessions of an English Opium-Eater, is the major suspect in a series of ferocious mass murders identical to ones that terrorized London forty-three years earlier.

The blueprint for the killings seems to be De Quincey’s essay “On Murder Considered as One of the Fine Arts.” Desperate to clear his name but crippled by opium addiction, De Quincey is aided by his devoted daughter Emily and a pair of determined Scotland Yard detectives.

In Murder as a Fine Art, David Morrell plucks De Quincey, Victorian London, and the Ratcliffe Highway murders from history. Fogbound streets become a battleground between a literary star and a brilliant murderer, whose lives are linked by secrets long buried but never forgotten.

As soon as I finished the first chapter, I was hooked! (check out the PREVIEW) In the story, we go inside the mind of a killer, follow around a group characters (who make a very interesting team) trying to solve the mystery, and get a very impressive use of the historical 19th Century London.

Thomas De Quincey and his daughter, Emily, have recently come to London to help promote the release of his new book. Coincidentally, at the same time of his promoting, a horrific mass-murder takes places with a striking resembles to a murder he described in one of his earlier books, On Murder Considered as One of the Fine Arts. In that book, he describes the famous Ratcliffe Highways murder in exquisite detail and with words of praise, calling the murder an “artist”.

Detective Ryan and Constable Becker are assigned to lead the investigation of these murders. The detectives are able to see the connections to the Ratcliffe Murders, and notice how the details Thomas wrote of the previous murders in his book, mirror the details of the current murder… All this happening as Thomas has just arrived in London, promoting the release of his new book…

Naturally, Thomas becomes their number one suspect. However, after meeting with Thomas and his daughter, and seeing how he is a feeble, opium-addicted old man, they soon begin to believe De Quincey when he insists that he is being set up. It is then up to the two detectives, Emily, and Thomas, to free his name of the charges and find the real murder before it is too late.

I loved season 1 of The Following. The reason being because we were able to get the perspective of the killer’s mind, see how poetic and artistic he thought he was, and wtiness how he was able to manipulate our main protagonist by using his own work against him. Murder As A Fine Art is similar in this fashion.

The Murderer’s POV’s were my favorite parts. In the first chapter, we follow around the killer – or artist, as he likes to call himself – on his mass-murder. Reading his thoughts, seeing the care he puts into setting up the murders, and the beauty and poetry he felt from the killings themselves to make them a thing of art. As the story goes on, we see how he is able to manipulate the people and government, set up De Quincey by using he his books against him, and learn how it is that he became to an artist. It all was fascinating.

Our main ‘good guys’ are Ryan, Becker, Emily, and Thomas. I loved all of them. Each  distinct in their own way. For this being the first novel, how well and how much development they all got, was satisfactory. The dynamic of this team fit and felt perfect, and Thomas De Quincey is an amazing character (I wonder how similar this Thomas and the real-life Thomas are?). Such a unique and interesting personality. From his opium-addiction to his philosophical thinking to his general mannerism – Thomas De Quincey is one-of-a-kind.

Another one of the stronger aspects of the story is how well David Morrell is able to explain key points of history from the 1800’s in London, and then how efficiently – and appropriately – he is able to incorporate those lessons into the story. We start off with an introduction chapter that gives us a basic outline what the Ratcliffe Highway murders where, and how they were perceived by the public. Which then leads into the first chapter where meet, and follow along, the murder. At the beginning of most of the earlier chapters, and a couple of the later chapters, Morrell will point out and explain one key feature of about history during the 1800’s. It could be the way people thought about certain aspects of life, how beggars and high-class were perceived, how doctor’s believed people got sick, or anything of the like. The history does not over power the fiction at all, it used just briefly as I described, but this explanation with just a paragraph, or maybe a page, this little bit sets the reader up to be more aware,

Using the history like this we are able to see how clever the murder is to use the public, how ahead of their time the detectives are with their techniques, how advanced De Quincey’s thinkings and philosophies are, and how progressive of a (female) character Emily is. Without the emphasis and bringing of the history to the attention of reader, the importance of key events and traits of out main characters would be lost.

The only feature I had an issue with was the sections, From The Journal of Emily De Quincey. It is not that I did not like them, but they did not seem to fit into the story at times, or be used as effectively or frequently as I felt was right. There are a few Journal’s in the start of the story, and I was okay with that. Emily is definitely unlike any other female during the time – she would be considered a strong character in today times, let alone back in the 1800’s – so seeing from her perspective helps to build up her character, give us a new sight on the story, and how she perceives other characters – especially her father. However, after the beginning, we do not have another Journal Entry until much later on. I understand why it was used then – for one key moment – but I don’t think the POV was needed for it. Then it comes in again once more at the end, and again I felt we could have done without it. Maybe if they were used more frequently, I wouldn’t have an issue with them? Not sure, but I will say things again; It is not that I don’t like these section, they just felt out-of-place or not needed at time. This is a series though, so David could be setting up Emily to have a greater role in more of the novels to come.

That being said, no other complains. A great pace to novel. Starts off fast, and only get faster to the end. The unravelling of the mystery was very addicting. I didn’t figure it out until about the same time as our characters, but that’s when the real fun happens. As the reader, we get put into the situation where you know who did, our good guys know who did it, but no else believes them and they have to way to prove it! It’s so frustrating (yet, addicting) when that happens. It’s what keeps you hooked and emotionally invested because you just dying for the final unveiling to happen so you can be like, “Ha! You got caught!”

Almost forgot, Thomas De Quincy was a real person, and On Murder Considered As One Of The Fine Arst is a real published work of his. However, you do not need to be familiar with that work or any of Thomas’ work for that matter to enjoy this novel. The parts that’s are needed for the book, are explained throughout the story (part of David’s excellent use of explaining and relating history) and you will not feel like you are missing something.

I believe this would be a great choice for fans of the mystery-thirller genre, or for anyone who is a fan of 19th century London. David Morrell is able to bring to life London, just as well as his is able to tell a thriller. This is the first of a series, and while I do not already own the Inspector of the Dead, I have full intentions of continuing on with the series at a later date.

2 thoughts on “Book Review: Murder As A Fine Art by David Morrell”