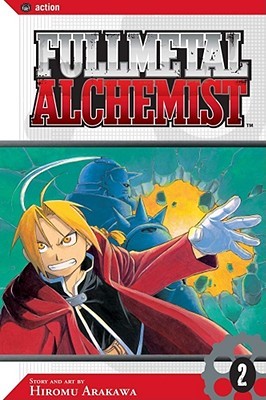 In an alchemical ritual gone wrong, Edward Elric lost his arm and his leg, and his brother Alphonse became nothing but a soul in a suit of armor. Equipped with mechanical “auto-mail” limbs, Edward becomes a state alchemist, seeking the one thing that can restore his brother and himself…the legendary Philosopher’s Stone.

There are many types of alchemy in the world. Edward’s commanding officer, “Flame Alchemist” Roy Mustang, can control fire. Shou Tucker, the “Sewing-Life Alchemist,” specializes in the most difficult alchemy of all…biological transmutation, the ability to alter the tissue of living things. But no matter what their power, alchemists are still human. And when a mysterious killer begins stalking state alchemists, no one can escape his vengeance…

Volume 2 focuses on advancing the plot; The Elric Brother’s past, the Philosopher’s Stone, the military, and the introduction of Scar. This volume still had it moments of action, but overall felt plot driven and had a more cohesive feel to it – rather than each chapter feeling like a separate episode.

After our introduction to Colonel Roy Mustang, aka. The Flame Alchemists, at the end of Volume 1, the Elric brothers waste no time and request that he give them more information on where to learn more about bio-alchemy. This takes the brothers to the home of Shout Tucker, the Sewing-Life Alchemist. There, we learn about Tucker’s creation of a talking Chimera, and also a dark secret of his that causes Ed to face a truth from his past.

While at the Tucker residents, a mysterious man, know only as Scar, shows up to do the work of God. After the Elric brother’s and state alchemist’s interaction with Scar, it leaves both Ed and Al injured. In order to ‘repair’ themselves, they must go off to Resembool to see their mechanic. Before they reach their destination though, they run into a man who has been long thought dead, which causes them to take a slight detour on their trip.

We meet an array of new characters this time around; my favorite being Major Alex Louis Armstrong. He has a very intense battle with Scar and pulls off this pretty badass “elegant alchemical technique”. Also – it may be my inner bodybuilder – but his panel on bottom of page 116 is both epicly awesome and hilarious XD

The new mystery man we meet is Scar, who is like the hand-of-God. No, really – he pretty much has THE hand of God. He is on a mission – a personal vendetta? – to rid the world of state alchemists, and it is through his appearance into the story that we learn of the dark past of the state alchemists, and why it is that many people have a problem with them and the military.

Also coming back into the story this time are Lust and Gluttony. What they are doing, who they work for, or anything about them is still a complete mystery. Only thing we know is they all have this same tattoo on their body, and have taken an interest in the Philosopher’s Stone, and Ed.

Early is the novel Ed and Al briefly mentioned their trainer again… I’ll be really interested to see who and what this person is like. And I am looking forward to seeing their mechanic, and Resembool next time.

(Everybody else is loving the Extra sections, right? So freaking funny! You should compare the In Memoriam section in this volume to volume one… interesting to compare where two characters go…)

Not as much action as I would have liked (that just me), but a strong and emotional plot.