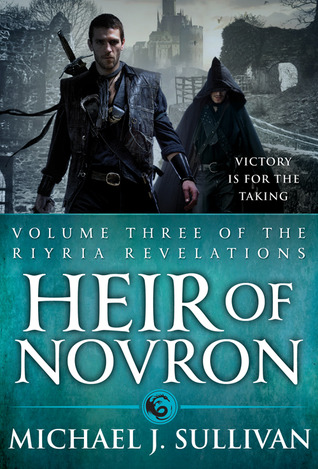 I’m sad to have closed the last book on this series, but damn, was it a great journey!

IT ALL COMES DOWN TO THIS…THE ELVES HAVE CROSSED THE NIDWALDEN. TWO THIEVES WILL DECIDE THE FUTURE.

“I saw a great journey. Ten upon the road, she who wears the light will lead the way. The road goes deep into the earth, and into despair. The voices of the dead guide your steps. You walk back in time. The three-thousand-year battle begins again. Cold grips the world, death comes to all, and a choice is before you.” — Fan Irlanu, Tenkin Seerer of Oudorro Village

Percepliquis is the final installment of the epic fantasy, The Riyria Revelations. In this saga that began with The Crown Conspiracy, two thieves caught in the wrong place at the right time were launched on a series of ever escalating adventures that have all lead to this moment. Three thousand years have passed and the time for Novron’s heir to act has arrived.

***STOP RIGHT NOW IF YOU HAVE NOT READ THIS SERIES YET. Obviously spoilers, but you’re wasting time reading this when you could be getting started on the series! Just go out, buy these books, and read them. I promise you, that this may be one the fastest times you will ever read 2,000 pages worth of a series ***

Take that action I was talking about in Emerald Ship, and the emotion from Wintertide, then add in a little bit of Lord of the Rings, and that, my friends, is roughly what you will be getting with Percepliquis. Which is the best book in the series, by far! I only wish the last book wasn’t so short 😛

The Elves are now attacking from the North. They are conquering lands and destroying cities at an alarming rate, and it will only be a matter of time before they reach Aquesta. The only hope for man – for all of mankind – is to find the ancient city of Percepliquis, and the tomb of Novron. Empress Modina will send off Rirya and a crew of our other favorite characters on this quest. Meanwhile, her, Nimbus and Amilia, and Sir Breckton and the army will do their best to protect the people of Avempartha, and prepare for the war…

Look, after the way Wintertide ended I shouldn’t even have needed to give that brief summary. Actually, I don’t know how you have been able to stop after Wintertide and not immediately start reading this one. Just stop now, and go read it!

I want to briefly go over the set-up and dynamic of the group that we have going off on this quest. Every single person on this quest is chosen for a specific reason. With exception of Myron (I mean, who doesn’t love that monk?), each of these characters also have fairly bad past or present relationship with another character or two, that could potentially cause some problem during this little adventure. For example, we have Magnus; Great at building and digging, but not too high on friend list of Alric and Riyria… and pretty sure he is at the top of Royce’s to-kill list. Wyatt is coming along too, but he better hope that Royce and Hadrian do not find out that he was the one that set them up. It’s little things that, that created the moments of tension and nerves for me, but at the same time, also added to excitement already in the quest itself.

These companions working together are like a double edge sword. Or maybe a better metaphor would be some chemical reaction. Each substance is needed for the reaction to come to completion, but if one things goes wrong; if it’s shaken too fast, put in the wrong temperature, or added in the wrong amount or sequence, then the whole thing will just blow up! A perfect, delicate balance of the substances – characters – is needed for things to work.

This quest into Percepliquis was the greatest part of the series, and totally reminded of The Lord of Rings! (good thing). The Emerald Ship was my favorite book in the series, and Wintertide was just as good. But everything that made those two books stand out compared the rest, is all found in this quest! The action, exploration, group dynamic, emotional connections, scene selections, and characters situations – all of that in just this quest alone was more powerful than before. And that’s not even taking into account the events that are happening in Aquesta! Or what happens in the end… or in the very end. This book is in another league to the rest in the series.

I’m not going to say I cried at one point during this book, but I’m not going to lie, there was one scene where my eyes totally watered-up. If you want to know SERIOUS SPOILER WARNING: (The scene with Royce dying, Hadrian is calling him “buddy”, right after we figure out Mercy is Royce’s daughter!)

Zero complaints at all about the ending too – couple good twist.

I was very sad for this series to come to an end. I built up an immense bond to all of these characters; their’s personalities, individual stories, and relationships. All of the laugh of loud moments of Hadrian and Royce; That lovable and innocent Myron; Seeing character’s like Arista and Modina battle through hardships and come out stronger than before. To think that these books started out with Royce and Hadrian hired to just steal a sword, and to see where that took them. The story that began to be told in the background – the history of the Old Empire, the world of Elan, and the Gods- and watching it unfold, come to the front, and having all the pieces coming together at the end. I will miss this series… but good thing there is still the Riyria Chronicles to read!!!

Also, every time Myron said, “I’m a monk”, I lost it and couldn’t stop laughing.