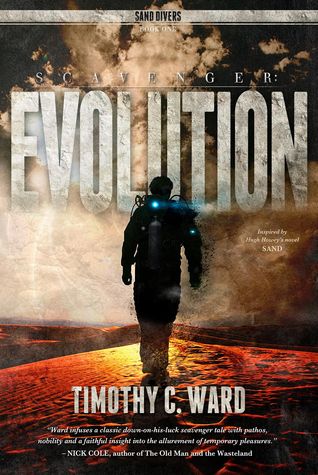 In the future, sand divers search the depths for the lost city of Danvar and the truth behind their bleak existence. Divemaster Rush hasn’t dove since he lost his infant. A job offer turns from an escape to a trap and the lure of a hardened heart to survive like anyone else would. One dive leads to another. Farther and farther from the surface, death and evolution change his world. He’ll have to change too or watch his wife rise without him.

Inspired by Hugh Howey’s world of Sand. Written and sold with his permission. Scavenger: Evolution takes the landscape of Dune and throws in the pacing and thrills of Alien.

Scavanger: Evolution is a fan-fiction book set in the world of Hugh Howey’s Sand. This book is comprised of three separately published works – a novelette and two novellas. Please, don’t let the mention of fan-fiction scare you off.

The story is focused around our main protagonist, Rush. When we first meet Rush, he sitting down at a bar of the local brothel, where he works as a custodian. Rush used to be one of top sand-divers around, but after the death of his only son, the blaming of the wife for what happened to his son, and troubles with alcohol, and Rush seems to have given up on life and now find himself here, the lowest point.

He is approached by a mysterious man at the bar, who asks Rush to perform one last dive. Rush accepts, but when he realizes that is not a mere treasure hunt, and what it is that he will be doing will have catastrophic effects, Rush has a moment of revelation and decides that he cannot go through with this and must somehow try to stop the man.

In trying to stop this man Rush uncovers more than he expected and begins his quest of redemption. This journey will take him to the ends of desert, possibly uncovering the location and truth of Davnar, and finding new technology that makes a diver’s suit look like child’s play.

Yes, this is set in Hugh Howey’s world of Sand. But, no, you DO NOT NEED to be familiar with it, in order to enjoy the story. I had not read one word of Sand before, and had zero issues. Far as I can tell, the sand-diver’s suit technology and the world itself are really the only the things that Tim borrows. If anything, not being familiar with Sand and seeing the sand-diver’s technology for the first time made it all the better! Then for fans of Sand; the story itself is great, and you should consider it a bonus that Tim chose to tell his story in a world that you already love.

Part 1 is our novelette, Red Sands. I thought that Red Sands was the best part of the book. It was a fast-paced, heart-felt story, that had me hooked from the start. Actually, I thought this novelette was amazing. What I like about (most) short fiction works, is that they have that fast-paced/compelling story, and build up connections to our characters quickly. Tim nailed this with Rush. From when we first met him, I immediately felt a sympathetic connection; felt his pain over losing his child, the blame for it that he placed on his wife, and the guilt he felt for all of this. Tim mentions that he is a character first reader, and it is very evident in his writing.

Part 2 and 3 is where our novellas start. Blue Dawn picks up seconds after Red Dawn ends, and then Twin Suns does the same. To my surprise, the story really expanded from where we began – like really expands. At its heart, I still believe this a story about Rush’s redemption: Trying to do good on all his wrongs and the people he hurt in his past, and live a good, proud life now, for the memory of his son. But from where we started – in that brothel – to where we start and ended in Twins… WOW! With each part the story just kept going and going, and even the plot became more complex than I was expecting. Before I knew it, we were in this secret underground facility with these insane Poseidon-suits (that make sand-diver look like meh) fighting off this crazy nano-technology! Plus, because each part is technically a separate story-short in itself, they are going to keep the blood pumping throughout.

My one issue comes with some of the side character developments. In short-works, I don’t except too many detailed examples of character interactions or flashbacks to reveal their motives. Just a brief example here or there to let me know what I should be feeling is sufficient. Going from a novelette to novellas as a continuous story – and not episodic – it felt like I was reading a novel, and so I couldn’t help but expect that greater amount of detail with the characters.

With Rush, like I said earlier, I felt an immediate connection and thought his development was excellent. My issue lies with the side character’s development, and Rush’s relationship with them. It felt like in part 2, Blue Dawn, Tim set out to establish these other characters and connections, showing us more of Star, Rush’s wife; his friend, Avery; some other side characters; and how the people from the town feel about Rush’s past and what just occurred in the town. Unfortunately it still felt…not rushed or underdeveloped, but that not enough  there. I wanted to see more of the life of Rush and Star had together, before and after their son was killed, and the exact moment when their son passed, to see how things have changed with them. We get a couple of instances where Rush and Avery reflect on their past, but those moments and stories felt brief. Same goes with the other side characters and the town’s people. There is enough there to get the feelings of the characters and emotions of the moment, but it still felt like something was missing.

This is where I find the pros and cons that come from tell a single novel is separate works. They are short-works, so it’s right to the point, no rambling, and let’s keep things going from the get go. The fact that each part picked up exactly where the prior left off, means putting these in one novel make the story-telling and plot that much more effective. But, with the exception of Rush, because it was told it was told in separate parts, it felt like some of the other character’s development did suffer a bit. Instead of having the WHOLE novel for our relationships to develop, each story can only designate a brief amount of time to this cause.

I wonder how this would have turned out, had Tim set out to write this Novel as whole, rather than breaking it up? For Sand Diver #2 I would prefer a novel – I think it maybe advantageous to our characters – but if it were 3 novellas again, no reason they could not be just as good if not better than a single novel. There is no saying that I won’t see that moment of his son’s passing, and of course as the story goes on, we will see more interaction of Rush with other character’s, learn more of them as well, and out connection will naturally grow greater to them. I just think a novel to start may have sped up that process.

Aside from that, you could say I was caught up in the book like a man in quick-sand! I had sympathetic and growing connection to Rush. The story just builds up and the plot got better and better with each short-story. And the technology that Tim comes up with at the end is awesome. (I think most people will find part 3, Twins Suns, to be best. The story is fast as ever there, it is where we get the Poseiden suit, and the way it ends… I just feel so much for Rush! I don’t who he should be trusting!)

I had a lot of fun reading this. For fans of Sand, sci-fi stories, or reader looking for a quick read on the weekend, I recommend this. I will be eagerly awaiting for Sand Divers #2 to come out.