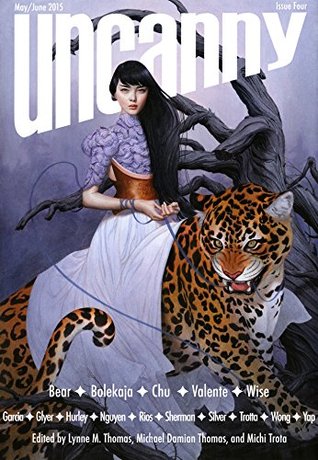 This issue has some of my favorite short stores and poetry of the year!

The May/June 2015 issue of Uncanny Magazine.

All that plus two podcasts!

Episode 4B: Editors’ Introduction, Elizabeth Bear’s “In Libres” (as read by C.S.E. Cooney), Isabel Yap’s “Apologies for breaking the glass slipper” (as read by Amal El–Mohtar), and interviews.

It was a good military SF story, with view points switching between these alien, telepathic lions, and field reports from various members of the military investigating the new planet. I think this story has a lot to offer, but I don’t know. Think I’d need to read this one again. Catherine does have fantastic prose! And there is a good interview with her on the podcast (episode 4A) where she talks about the influences for the story.

It gives a few different methods on how a witch could possibly acquire a house, and proposes different and… unique techniques – with the pros and cons of each – on how to undertake each method. Regardless if it’s a “story” or not, I do know is it was hilarious! XD

Restore the Heart into Love by John Chu – 3.5/5 Rating

I was Chinese minor in college and learned simplified Chinese (thank goodness, because traditional looked complicated), so I understood that the Chinese government had broken down characters into simpler, easier ways to write. Just how english words can be broken down into different roots and stems with different meanings, the Chinese characters can be broken into different radicals, each of which have their own meaning. When the Chinese language was simplified, some of these radicals were taken out of the character. The character keeps the same meaning, but if broken down to radicals (roots and stems) it would not make sense anymore. Chu takes this, and uses it as a metaphor about preserving the origins and meaning of our history, and at the same time, explore the relationship between a man and his mother.

Euclavia is a graduate student who needs to goes to the library to get one more source for her paper. She asks her friend Bucephalus, a centaur, to come along and help her. Why does she need help? Because the library is a labyrinth of death where you can easily get lost, starve, or killed by the books – duh! XD

Every joke I used to make with my friends about going to the library: getting lost in library; feeling like we were going to die in there; having to bring to food or we would stave; going to the bathroom only to take break; being convinced the professor making us do more work for no reason other than to kill us. Bear takes all these and many more, and throws them into a fantasy story!

If you are going to read one story in this issue, read this one!

It is about Andre, a music teacher (college/university, I believe), who has been in search of a singer who may be able to sing his song Thee Voices. It is song that was composed by his father, written for him. Before his father was able to finish the ending though, he disappeared, and Andre must now finish it himself.

This song is make up of no lyrics. It is all vocals, lasts over an hour, is non-stop, and considered the greatest and hardest song ever created to sing. All singers who have previously tried failed. One day though, he finds the singer Tye Amma, aka “Chocolate Tye”, and she could be one to finally sing the piece.

The most powerful part about the story is how the song being sung is describe. There are no lyrics, and Lisa doesn’t describe any notes as “oohs” or “ah” sounds coming from the voice. What she does describe is the relationship between the song and the voice sining it – how the singers react to it; how Andre feels hearing it sung; the emotions and feeling that everyone goes through with this song. Since there is no lyrics of any kind described, I was able is to create what I believe was the most powerful and effective voice possible in my head, based off of all the character’s reactions. Great ending too 😉

Young Woman in a Garden by Delia Sherman – 3.5/5 Rating

What stood out to me about this story was the subject matter. Theresa is a Ph.D student earning a degree in the History of Art when she decided to see if she could visit the home of French 19th century painter Edouard Beauvoisin (whom happens to be her great-great-grandfather) to learn more about his work and the truth behind the relationship between him, his wife, and his model.

It’s academic focused story, and Delia does an excellent job in describing the paintings and art world surrounding Edouard during his time of life. It was fun seeing Theresa trying to uncover Edouard’s pasts, and watching as she became consumed by the desire to study his works and life.

It’s the Big One by Mike Gyler

Top Five Myths about YA by Julia Rios

I Don’t Care About Your MFA: On Writing vs. Storytelling by Kameron Hurley

For the Gardener’s Daughter by Alyssa Wong – 5/5 Rating

Apologies for breaking the glass slipper by Isabel Yap – 3.5/5 Rating