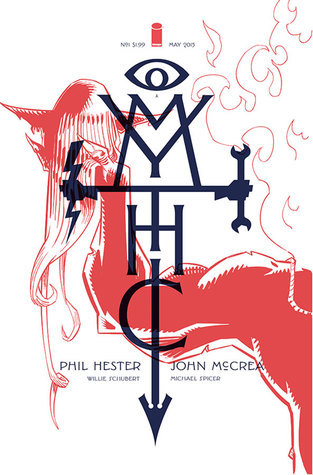 If only the comic were as good as its cover…

Science is a lie, an opiate for the masses. The truth is, magic makes the world go ‘round. And when magic breaks, MYTHIC fixes it. Apache shaman Waterson, Greek immortal Cassandra, and cell phone salesman Nate Jayadarma are the crack field team assigned with keeping the gears of the supernatural world turning, and more importantly, keeping you from ever knowing about it.

This a brand new series from Image Comics. I didn’t know much about it, but the synopsis sounded like it would be fun, and that art style on over the cover is A-MAZAING! Sadly, that cover was the high point for me, and things only went down as the pages went on.

Cover and interior art styles are not the same 😦 The drawing is still same – I’m not the biggest fan of that style, but I still think it is very good and would read a comic with it – but where it changes is with coloring. That gorgeous white and solid color filling is not what we get. Again, it is not bad, but I would have loved to see the whole comic or maybe parts of it like that.

The story starts off when Nate, our cell phone salesman, gets a last minute customer needing her phone fixed. In short – suddenly these two mutant, alien monkeys pop out of her, trying to kill Nate! And now he has to fight them off! (And he does a pretty kickass job at that, too.) At the end of this fight is where we first meet Waterson, and he is there to dispose – like with a dump truck – the remains of the mutant monkeys that Nate has just mutilated. Based off of Nate’s master kung-fu skills, I thought he was already on the team, but I guess that was wrong. After witnessing the fight, Waterson invites Nate to join to the Mythic Lore Services.

I actually thought this first half was very good, and that I was going to like the series. Nate’s fighting skills seems a bit unbelievable, but whatever. The fighting scenes were good, and even though the coloring wasn’t the same as the cover, I actually liked it. The color tones aren’t bright, but the contrasting darker background to brighter front presence really made everything pop!

HOWEVER, once we finished things there and get to the “Now”, and are in a desert looking Yosemite during a drought… well it felt like I was in a desert – dull, colorless, and boring. Maybe it was because the first half was in the city at night, and now we’re in this dry valley, but all the color’s tones showed through, looking flat and dull.

We learn a little more about Mythic and the lore: basically, science is just a front so humans can explain things to themselves and feel comfortable, when really the world is ruled by magic; all those stories, like the Gods are bowling is the sky causing thunder, are true. The actually reason there is drought is not because of wind patterns, but because the sky and mountains haven’t been getting it on – if you know what I mean 😉 Now the Mythic team has to try to heat things up between the couple again.

It seems like the Mythic team is essentially the police force of these magical happenings and mythical creates, making sure all things go along smoothly and keeping it out of the public eye. I’m down for a story like that. And I was digging that whole “science is wrong, and is merely a front for magic which rules the universe” thing. They have a preview for issue #2 in the back, and it leads us to believe that something is going wrong to cause all the magic, gods, and monsters to suddenly start acting up, and I assume that will cause our Mythic team to have to solve the problem.

I like what the Mythic Lore Services is about, and where I think the story is heading. The comic is pretty funny – as you can tell by the coitus fiasco XD – and Waterson in particular has a ton of great lines! But honestly, nothing happens in this issue. Sure we got the fight, but that was it – and it only felt like a fight. To me, it felt like there was zero plot advancement this whole issue. Sure we learn stuff some stuff in Yosemite, but I was kind of bored and everything in the second half was just “meh” for me.

This just was okay. I think it has a ton of potential, but there wasn’t anything happening this time that hooked me. I’m not going to be getting issue #2. It is going up from $1.99 to $2.99. It’s only a buck, but I rather get an issue of a series I like or wait for something new.

I wouldn’t recommend this series – that doesn’t mean it’s bad or you wouldn’t like it – but I’d say wait to hear more about what happens with the next couple issues. If things get better, I will totally be getting the trade paperback when it comes out.