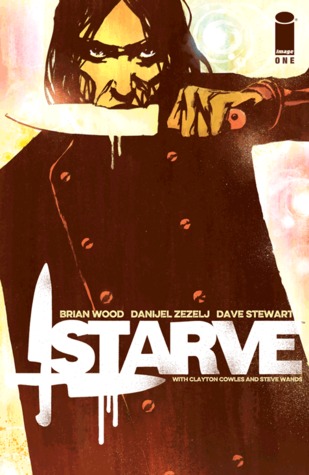 I think this series could be a hit!

UTENSILS DOWN, HANDS UP! WELCOME TO STARVE! Once the world’s most famous chef, Gavin Cruikshank’s been in a self-imposed exile for years. His little foodie television program has since evolved into STARVE, an arena sport that pits chef against chef for the pleasure of their super-rich patrons. It’s a stain on a once-noble profession, and Chef Gavin is ready to go to war to stop it. Two things stand in his way: his arch rival Roman Algiers, and his adult daughter Angie, who probably just wants her dad back and acting normal.

This is another new series from Image Comics. If you happen to follow me on twitter (@LifeBooksEscape), then you will know of my obsession with cooking competition shows – particularly Master Chef! Well, that’s exactly what this new series is about! Except, there is a little bit of a twist to this competition…

Gavin Cruikshank used to the World’s most famous chef, and had created a hit cooking tv show. However, something happened and caused Gavin to leave everything behind.

Years later, Gavin living that consist of smoking, drinking, fighting, gambling, and, of course, cooking, when the network gives him a call. It turns out that since his departure, Stave has been doing amazing and is now the #1 show in country.

In order get all money his due (it is his show) he must complete a single season worth of episode. The thing is, the show has… evolved… since he was last on. Getting the money will not be easy, because technically, it all goes to his ex-wife, who absolutely hates Gavin.

Lets start with the art: the cover and interior are the same! (YAY!!!) And I love the art style! (You could say it had good plating XD ) It’s got some cool cell-shading thing going on… I don’t know what it called (I’ll google the names of different drawing and colorings styles one day), but I’m feelin’ it! If you like the cover, you’ll the interior.

For this being the first issue, we get A LOT of information! Quite a few plots are laid out, multiple questions and mystery are raised, and nothing feels rushed at all.

Without saying what those details are, some of that information is: we know Gavin left the show but we don’t why or how it kept going without him; Gavin’s ex-wife would probably kill him if she could get away, and we do learn why she hates, but I leave that for you to read; Gavin also has a daughter(!) which makes me wonder ever more why he was hiding in exile.

Those are a few separate plots and mysteries that are brought up, but what had my mind turning the most is the world and cooking show.

This world isn’t post-apocalyptic, but society has turn to sh!t. Not in the way nuclear bomb way, but in wealth. It is a world where 99.9% of the world is poor, barely even able to get by on far less what they used. And as for 0.1%? Those are rich, that over indulge themselves to a “criminal excess”. This small, overpowered rich class is the one responsible for changing (ruining?) Gavin’s original show while he was gone.

This new show, Starve, is something else entirely, and I have a feeling that the loser of each episode could face dire consequences. However, as the first issue comes to a close, and the first competition is about the start – the comic ends with Gavin about to start his first show back, against his long time rival, who is now the #1 chef of the show – they bring out the chosen food. It is a food of the poor people – the common people – and the two chefs must take it and elevate it to be worthy for the mouths of rich. What is this unthinkable, garbage food, that the common man eats? DOG.

This first issue was great; Gavin is already a great character; I can’t wait to see what this cooking comp is all about and how the rules work! I don’t know if this comic is going to be a horror, or a thriller, or a mystery, or what – all I know is I’m going to keep reading, and already have issue #2 at my side to read.