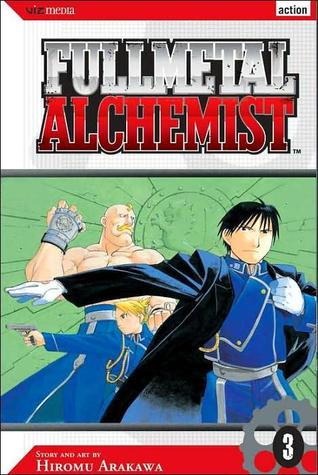 This was an INTENSE volume!

Accompanied by their bodyguard, Alex Louis Armstrong, our heroes seek out their closest childhood friend, mechanic Winry Rockbell, to fix their battered “auto-mail” bodyparts. Soon their quest for the Philosopher’s Stone takes them to the great central library, where the Stone’s formula may be hidden…if the mysterious figure named Lust doesn’t get there first! But the secret of the Philosopher’s Stone may be even more frightening than the beings who guard it…

These volumes are definitely getting better as the story goes on. Once again, each of these chapters were very cohesive; starting off with some nice plot background, to a little bit of a set up for the final scene, and then a big action scene at the end. This volume felt like one solid piece, and level above the previous two.

The Elric brothers are now back into their hometown to meet their mechanics – Granny Pinako and Winry Rockbell. It is here with Granny Pinako, that we are told of the past of the brothers; what Ed had to endure that made his so strong, and the love that Al has and how much he looks up to his big brother, is brought to our attention.

After their maintenance is complete, the brothers head off to the central library to continue their mission with the new information they had previously recieved. Unfortunately, before they arrived, it seems that a slight accident has occurred causing the information Ed wanted to be destroyed. Luckily though, they meet up with the ex-librarian, Shaska, who might be able to help them with this dilemma. “Coincidently”, Lust and Gluttony are also in Central at the time, and happen to have a little run in with Scar.

Working with Shasksa, and then doing a lot of puzzle working themselves, the brothers are able to figure out where they need to move next. They believe they must investigate the an old, government owned lab, that has long been shut down. What the they find is not wholly what they had expected. Here, Ed will face an adversity unlike, and very-like, one he has faced before, and Al will be forced face an opponent who will cause him to question his brother and who he, himself, maybe really is…

Grany and Winry were awesome. Who would have that they would be the mechanics? (haha!) Granny is hard-nosed, old and wise, mother-like figure. Winry is that cute tom-boy. You can tell quickly that two women care deeply for the brothers as sons and brothers. Ed and Winry are really cute together. Not in love way – I don’t sense that right now, at least – but in the brother-sister, growing up together as children. I hope we will be seeing more of them. (And they way things ended with Winry, pretty sure they soon will).

Colonel commander Hughes gets more focus in the volume as well. Not much to say, except that I think the man is hilarious.

What I found most impressive this volume, was how the story well transitioned from the emotional, background building at the brother’s home, to the life and death situation Ed and Al find themselves at the old lab. It wasn’t simply skipping from A to B. What was laid down in the earlier chapters, is set as foundation for the actions scenes and topics of dialogs to take place during the final chapters. In other words, a lot more goes on with Grany and Winry than just fixing up some arms and legs.

In volume 1, I had said that the action in the train chapter kept me flipping pages, barely seeing the text, because I so caught up in the drawings and what was happening. Almost the exact opposite this time.

This volume shows off the artistic capabilities of Hiromu. There is about 2 or 3 pages of just straight drawings of the fighting, and with exception of BAM and KABLOOM, there are no words or dialogs. Yet, those 3, wordless pages, may have taken the longest to read. I was utterly mesmerized by the drawings, and her attentions to details. Each panel was like a new move being attacked or blocked. I guess I am complementing the choreograph selection for the fighting? Well, whatever it is – fantastic display of Himoru’s art used as a story-telling tool.

Along with Extras section at the end of the book, there is also a side story too… How funny is Hiromu!? These things are great! XD

Some of you may be wondering that now, after 3 volumes, if the omnibus (3-in-1 editions) are worth picking up, and if I will be continuing the series. From now on, I will be reading the omnibus editions now that I know I do indeed like the series (omnibus are great because you save money), and duh(!) I’m going to keep to reading! Plus. there is one hell of a cliff hanger to end volume 3!

Fun Fact: I read and wrote this review the first week of March. Why I am only just publishing it now – I have no idea LOL