This post is a little bit over due. I have been incredibly busy as of late. Like, way too much. (Barely even time time to read!) Sorry for the delay.

The weekend before last, from July 10 – July 12, I was attending Readercon 26 in Burlington, MA!

I got to listen to a ton interesting panels, sat in on a couple different author readings, got to meet and talk to a bunch of authors I was a fan of (and get their autographs!), met a couple new authors (got their autographs and books too!), bought way too many books, and got to attend The 2014 Shirley Jackson Awards!

That’s just my program book, an Excel print out of the weekends events, and then the porgams guide that went into the details of all the events.

(We also got I.D. card to wear around, but that has my full name and town on it… so you’re not going to see that 😛 )

I went to a lot of panels. A couple of them were a little boring or weren’t what I was lead to believe, besides for that, they were all great. Some of the best ones I went to were:

The Write/Read Balance. Elizabeth Bear, Amanda Downum, Betsy Mitchell, Charles Oberndorf (leader), Cecilia Tan… This was the first panel of the con I went to! The title is self-explanatory.

How to Read Poetry. Kythryne Aisling, Michael Cisco, LJ Cohen, C.S.E. Cooney, Elaine Isaak, Samuel R. Delaney… I’m trying to get back into poetry; I read and translated Latin poetry in College, but for some reason can’t do English. Weird, right? Anyways, this did give me a couple good tips to getting back into it.

Betrayal With Integrity and How I Wrote Grace of Kings. Ken Liu… If ever get the chance to hear one of Ken Liu’s solo talks, I strongly urge you to do it. He gives an amazing presentation, and wish they could have gone on for 2 hours.

Successfully Writing About Horrible Things. Mike Allen, Catt Kingsgrave, Kate Nepveu (leader), Mary Rickert, Patty Templeton… It’s about writing Horror, and yes, it was awesome. I didn’t know any of the author’s speaking on the panel, but after hearing Mike Allen and Patty Templeton talking, I’d bet they can write a scary story!

Nicola Griffith Interviewed by Kelley Eskridge. Kelley Eskridge, Nicola Griffith and Gary K. Wolfe Interviewed by Karen Burnham and Peter Straub. Karen Burnham, Peter Straub, Gary K. Wolfe… I wasn’t that familiar with either of the two guests of honor except by their names, however I still went and listened to their interviews and had a great time! These were another two events that I wished could have gone longer than the 1 hour limit.

Fran Wilde reading from her new novel, Updraft… What she read sounded good! I’m excited for it!

Mike Allen reading from his Shirley Jackson Award-nominated story collection, Unseaming… Remember how I said from listening to the Horror panel, that I thought Allen could write a scary story? I was right!

Patty Templeton reading from her novel, There Is No Lovely End… This was the last event I went to at the con! Just like with Allen, when I heard her at the panel, I knew she would write a good story, and again, I was right!

The only story on any of the categories I read was We Are All Completely Fine by Daryl Gregory, and that book did give nightmares. Thus, I was rooting for him to win! Then because Mike Allen seemed like an awesome dude, I was hoping he would win. And Alyssa Wong was nominated too, and because I loved her poem, I was cheering for her. 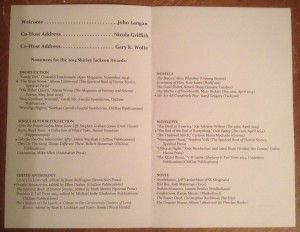 I put a little black circle near the winner of each category. I believe that I called “active listening” 😀 (I don’t know why I’m so proud of that though) Ha ha

I did take other photos of awards giving out and received, but my phone in strugglin’. They came out oh-so very bad. 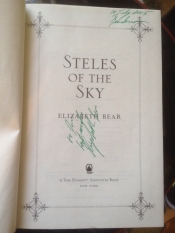 Elizabeth Bear singed 3 of my book! The first thing she said to me when I walked up was the she loved my hair 😀 The hair thing happens a lot, and I usually have something witty or funny to say back, but I just wasn’t expecting it then, and it left me speechless and I completely forgot what I was going to say XD

Daryl Gregory was nice enough to sign my ARC of Harrison Squared! I haven’t read it yet, but I did listen to We Are All Completely Fine, and I told him it that when I listen to it at night it gave me nightmares XD He got a good laugh out of that! Really cool guy too. Good conversation and he was great on all the panels I saw him on.

I got Fran Wilde to sign my copy of the SFWA Cookbook and mini poster of the cover of Updraft! When I was talking to her and Daryl Gregory though, I may have accidentally called the clouds on book cover snow… Oops! I was complementing the cover because I liked it! But I just looked too quickly. She picked up the picture and pointed out they were “white, fluffy clouds.” But Fran was so nice! And she knew I dun goofed by accident. I think she is doing her own tour for Updraft come September. I’ll try to go to that to pick up my copy and get it signed. With any luck, she will have forgotten that guy who made that mistake XD

Ken Liu signed my copy of The Grace of Kings. I got to talk to him a little bit about translating – what he does is what I once upon a time wanted to do in College – and then that I was a Chinese minor.

I went to a panel where Rick Wilbur was talking, and I knew his name sounded familiar from somewhere. I got to looking through the Readercon packet and realized it was because I owned an anthology he edited last year! Even better, was that he was doing a signing the next day. I had a great talk with him, and he actually teaches at a college that was close to where I played college baseball. 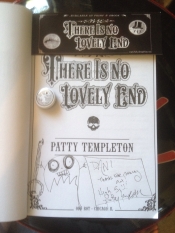 After Patty Templeton’s reading I decided to pick up her book (and a bookmark and a pin!) She draws that little ghost things in all her books, and says she can draw him hold anything – like coffee of a banjo. I said how about guitar? She started to draw the headstock… and the decided to back the banjo 😛 So I have banjo that was one almost a guitar. But I enjoyed her reading, and think this will be a very good story. 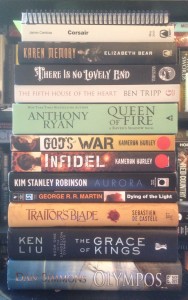 I know, I know, I know… I have book buying problem. But in my defense(!) some of those were free, some were 2 for 3, and others were used. Thus, I actually saved money! (Don’t argue, just go with my logic)

I’m not going to start The Grace of Kings any time soon, but I had to pick it up since he was there signing it.

I wasn’t the biggest fan of Range of Ghosts, but In Libres is a favorite short story of mine, so I wanted to give Bear another chance. Plus, this is the book for the NESFA Reading Group this month, and I’d like to go and check it out!

Then I grabbed There Is No Lovely End after Patty Templeton’s reading. I was liking the part she read, and wanted to check the rest of the story out. I want to read this one next month.

The have the first two books of the Raven’s Shadow trilogy, and well, I really didn’t want to buy the new hardcover. Saw the ARC in the freebie, and it was like a gift from Zeus.

And the same goes for Aurora. But I think that one was more a gift from the great Apollo.

There was a whole stack of free copies of The Fifth House of the Heat! This is coming out soon, so I may try to read it before then to get a review out.

I have a copy of Illium, but haven’t been able to find a used of copy of Olympus anywhere. This series, I may read before the year is done.

Then, I picked up Traitor’s Blade, because from what I’ve been hearing, this series is pretty much the greatest thing since sliced bread.

It was but 2 get 1 free (they were all $10), and I grabbed Dying of the Night. ASOIAF is my favorite seriea of all time; ever written. It is my numero uno. Yet, I have never read any other story by GRRM.

The “I Couldn’t Pass This Deal Up”:

I have been looking for used copies of these books for over a year now, and no store ever has them! This book seller was selling the first two book in almost “like new” condition for cheep. Excited to read finally read some novels by Hurley.

When I first arrived on Saturday, as I walking to a panel’s room I passed a girl who looked familiar. I looked again, and it was Alyssa Wong! Or at least I thought… wasn’t positive. She wasn’t on the list on for any panels so I wasn’t sure if it was her (I had forgotten about the Shirley Jackson Awards) But I went up and asked, and I was right! Had a quick convo with her (said she remember me tweeting my review about her poem), and she was super nice!

I didn’t sit on panels with John Chu, but I did brief talk to him and told him that I liked his short story, Restore the Hear into Love, in Uncanny Magazine last month. And after Patty Templeton’s reading, I talked to C.S.E Cooney briefly.

The Highlight of all Highlights happened on my way home! To make a long story short, I was pulled over about 5 miles from house. Cop asked for registration; looked at it for about a second, and then asked if I had one that wasn’t expired. I froze, looked at glove compartment, looked back at him, opened my hands, shrugged, and said “that’s all I got.” LOL Luckily, he was nice and in a rush, so he told me to just pullover and do it on my phone right then. I was Super lucky there.

I can’t wait to go back next year!

I lived relatively close, and didn’t need a hotel – about 1:20 each way, so making those 8am panels was a bit of pain, and staying late the night before – but if I had to fly or drive up and a get a hotel to go next year, I totally would.

Next year, I’d bring camera (or have a new cell phone) to take pictures of everything that was going on. It would have been really cool to get pictures will all the authors I met. I think photos are the one thing I regret not doing. Also, I definitely need to pick based more on the panel gets rather than what the “topic” is going to be about.

I was going to write a lot more here, and more in-depth about everything, but this is already almost 2 weeks over due, and I my schedule for life in general is backed up on everything, so, this all you get 😛

In short: I had an incredible amount fun and would recommend people to check it out.

14 thoughts on “Readceron 26: My Experience, Highlights, Autographs, and Book Haul”