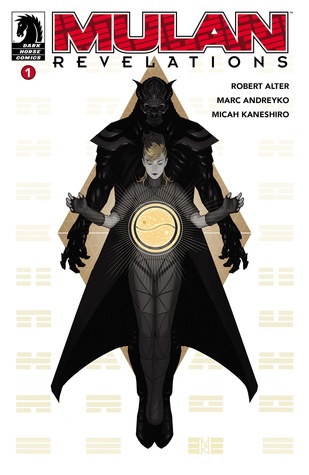 “Chinese martial arts meets futuristic cyberpunk” sums it up pretty much sums it.

Though the future boasts endless technological wonders, only a very few can afford access to them. As a new virus rages through the rich and poor, threatening all of humanity, a warrior is awakened to stop the evil puppeteers behind it all! Centuries after her ancestor and namesake fought for China, a new Mulan has been chosen by the ancient Chinese immortals in a final battle for the world!

This comics is marketed as a “thrilling genre blend of Chinese martial arts and futuristic cyberpunk!” If you were to buy this comic solely based on that description, I don’t think you would be disappointed.

The issue starts off in China in the year of 500 B.C. The Demons have risen up from Hell, and are now at war with the Immortals. We are thrown into middle of a battle, and it appears that Demons will claim victory, and the Immortals are helpless to prevent to it. Although they may still lose this battle, they still have hope in the form of one human warrior, Mulan.

As this battles near it’s end, the Immortals are able to gather up Mulan from the battlefield and bring her into their chamber and encircle her. She has little time to figure out where she is or even to ask questions. All they tell her is, “There no time for explanations, loyal Mulan. Gird you soul. For your destiny,” as they perform some type of mystical chant, causing her body to glow like the Immortals themselves.

In this futuristic Shanghai, robotic technology is flourishing and over 80% of the population how has some type of tech implants in their body. When we first meet Mulan, there is a newscast reporting that scientists are still looking for the cure to a nano-tech virus infecting the population. This virus has a 70% fatality rate and has killed already of 300,000 global.

Unfortunately, no matter how much scientists want to cure this virus to help man, the heads of the companies see this as a race to who the creates the multi-billion dollar cure. Turns out, this virus was released by one of these companies with that exact intention, but it got out of their control.

Later, when by freak chance, it is discovered that Mulan’s blood has the ability to cure it, that head of that company is now in search of her…

((Quick disclaimer: I know nothing about the Chinese legend of Mulan. I saw the movie – which I loved! – but that’s as familiar as I am with her story. So, the battle between the Immortals and Demons at the start with Mulan in it – I have no idea that is actually part of the legend, or if they are just borrowing the character of Mulan to put in their story.))

I’m a little torn about how I feel about this first issue:

I think that where the story is going, this series could awesome and extremely unique to read. I’ll be interested to see if there is a continuation of the earlier timeline with the Immortals, and how everything happening now is related to that event. When we first Mulan, she is meeting her brother. And he asking to borrow some money from her from their trust fund. This makes we wonder when/how Mulan first got transported to future – I’m not sure Mulan know who she really is. Later on when we meet her “Uncle”… well, I don’t think it’s really her Uncle.

There is also a lot of mystery surrounding and something in particular with that company, but to say would spoiling what I found to be a big surprise!

However, the plot has a very cut-and-paste feel to. Warrior is transported to future where they forget who they were; freak accident happens and a clue is leaked to the wrong people who their identity may be; the “uncle” finds out, opens the hidden door (and – what I assume will be in the next issue – gives the explanation of where Mulan came from). See where I’m going with this? I think it only feels like that because it is the first issue and their setting the rest of the story. I am willing to bet that with the next issue we will start to see this series separate it self from the rest.

Then for art style: I loved it. The drawings are great, and coloring is fantastic. The coloring in particular, with the color selections – bright, almost neon, glowing at time in city where appropriate – and the solid black outlining, really draws out (pun intended) a futuristic vibe to story, and adds to the already great world building.

I think this series has the makings to be something unique and great. This debute issue wasn’t as strong as I felt it could have been – not the most original with the way the plot is unraveling, but the content matter is very original, and really believe that this cyberpunk-martial art story is going to take off next issue. I will undoubtably be picking up issue #2 to see what happens.