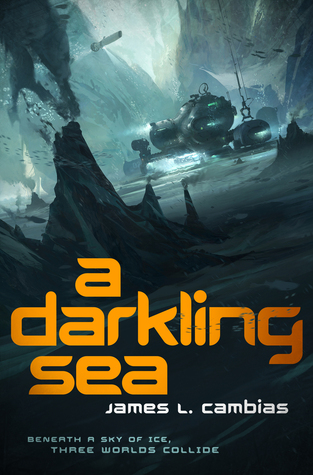 On the planet Ilmatar, under a roof of ice a kilometer thick, a team of deep-sea diving scientists investigates the blind alien race that  lives below. The Terran explorers have made an uneasy truce with the Sholen, their first extraterrestrial contact: so long as they don’t disturb the Ilmataran habitat, they’re free to conduct their missions in peace.

But when Henri Kerlerec, media personality and reckless adventurer, ends up sliced open by curious Ilmatarans, tensions between Terran and Sholen erupt, leading to a diplomatic disaster that threatens to escalate to war.

Against the backdrop of deep-sea guerrilla conflict, a new age of human exploration begins as alien cultures collide. Both sides seek the aid of the newly enlightened Ilmatarans. But what this struggle means for the natives—and the future of human exploration—is anything but certain, in A Darkling Sea by James Cambias.

When I think of classic sci-fi, first-contact stories are among the first that come to mind. A Darkling Sea is story about first-contact, but do not think that this will be like all the others you may have read. What separates A Darkling Sea from classics and other stories are two things: the situation and circumstances in which the contact is made, and (what is the greatest strength) the types of aliens that we come into contact with.

Humans are exploring the planet of Ilmatar – a freezing, cold planet that is all water underneath a thick layer of ice. The humans are there to study the native species called Ilmartans, who are completely blind. However, they are not allowed to have any type of contact whatsoever with the Ilmartans. This is because of the other alien race, the Sholen, who allowed them on the planet only if they keep that promise.

One day, TV star Henri convinces camera-man Rob to film him on an up and close adventure to the Imartans. Things were going fine until Henri got a little too close and then disaster strikes. This causes to the Sholen to send down two of their scientist, Gishora and Tizhos, to evaluate the event. They seem side with the humans, but they also brought along Irona, a military-minded Sholen who already seems to have his mind made up about what happened and how they should proceed.

Now Rob and the humans must try to do everything they possibly can to ignore and get rid the Sholen, if they wish to stay on Ilmatar.

The Sholen are these massive (larger than human) 6-limed figures. A particularly inserting thing about the Sholen is the way communicate with each. They do this through releasing sex hormones, sensing pheromones, and being very sexually physical. When humans greet, we shake hands; when dogs meet, they sniff each other’s behind; when the Sholen meet, they fondle each other’s genitalia. They bond and form relationships and trust through acts of sexual foreplay, in the same way we humans might grab a drink and have a conversation. This clashing of the two cultures’ communication can lead to some interesting, and uncomfortable moments.

The other set of aliens we meet are the Ilmartans. Think human-sized lobsters, that are completely blind, and communicate through this pinging/sonar system and also have a tapping system (similar to more-code). What fascinated me most, and what was the strongest part of this story, was their culture. They are a very sophisticated, academic race, and yet, at the same time, they feel very primal, still having basic animal instincts.

Their whole society and structure seems to be based around science, and the most powerful Imartans seems to be the ones who are leaders in the academic field. They conduct experiments, research, hold academic arguments, takes notes and write books – all in the name of science. They have a hierarchy system of landowner’s and servants, and a town economy with merchants and currency. And they have their two forms of communication. Despite those advance, they still felt extremely animal like in regards to their territory or how they have to constantly eat or will just fall asleep due to hunger; the way they speak, as well, with certain words they use. I tended to think of them as an animal who was given the ability to have self-awareness, but still continued living based on their basic animal instincts.

For the humans, with the exception of the opening few chapter, I found their chapters not exciting to read. I didn’t find any of the characters to be memorable, and even with the main human we follow around, Rob, there was no connection to him. At times when the Sholen were in a confrontation with humans, I was just mad the Sholen and not sad or worries for the human. Heck, when the Sholen were trying to remove them, I was worried about what would happen to all the science and data more than I was if any human would die. Seeing the Sholen trying to interact and break our thoughts and actions down into logic and reason was quite humorous at times, but I didn’t care to see what human felt toward them.

This may not have been such a big deal, but the main story is focused around the humans. However, I found the plot’s of both Broadtail and Gishora to be very engaging, and the chapters are split up about evenly between the three races. Broadtail was my favorite character in the novel by-far, and as the story progressed, I even found myself being sympathetic toward Gishora. While I didn’t find any of the human’s characters to be memorable, I did not think their was plot was bad by any means –  I was just missing a connection.

Overall, I still enjoyed this book. The alien creation and characterization were the greatest strength, and the story does a great job exploring the potential difficulties of two separate nations finding and trying to share unclaimed territory (if America and Russia went to colonize Mars, maybe?), and also the struggle between science and military in how to deal with the other nations and territory.

Fairly good debut novel, that is well worth a read. I will be interested to see how his next novel turns out.