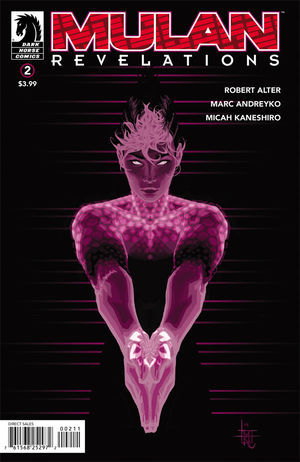 With her ancient ancestral power awakened, Mulan now enters a fierce struggle against the dark forces that wish to oppress her country’s people! But in order to preserve a delicate cosmic balance, the omnipotent immortals may be forced to intercede!

Picking up where last issue left off, Mulan and Uncle Hong are inside his house when the corporate soldiers come demanding for Mulan. Mulan is still confused over the situation, and although Uncle Hong knows the truth about who Mulan really is, he does not have time to explain; the soldiers could come busting through the door in any second. Instead, he whispers something into her into her ear, and suddenly she starts to change; she starts to float in the air as her body is enveloped in and gives this glowing purple light… looking like one of the Immortals.

This issue starts off with a kick-ass fight scene! Micah Kaneshiro’s art style was made for fight scenes. The drawings in each panel, mixed with glowing neon colors, perfectly captures the intense nature of the scenes while brining to life this cyber-punk world. There is one page in particular where Mulan is fighting these (cyberpunk) hounds – it is a gorgeous; Mulan glowing neon purple, the hounds with accents of neon blue, and surround them is this glowing yellow and orange fire. The page before it actually has a great fight of Uncle Hong where you can see the trail of the path his sword has taken in this blood-red. The art brings the pages to life.

While I find fights panels to be entertaining, this one went on way too long. It took up more than half the comic. Stuff does happen adding mystery to plot – but because everyone is busy kicking and punching, there is not much dialog going on. And because no one was talking, aside from Mulan get those powers, there was zero character development that entire time! When we finally change plot line, all I could ask was how come it took more than half to comic to tell me Mulan got her powers, fought the soldiers, and escaped. It took 14 pages to tell me that.

The kicker is, the next two POV are with the head of the company again, and the Immortals! And they are packed full info, and character and plot development! But, they only lasted 4 and 2 pages each… then it’s back Mulan.

It’s a shame to say, but Mulan and the new character she is with – it’s just bland. There is no development for them, no reason or motivation for their actions, and even after the fighting, she is still having these one-sentence-a-piece conversations. In all honesty, while what is happening to Mulan is interesting, aside from her powers, her story-line still feels like one I read before.

Mulan’s plot line took entirely too long to tell this issue, and even though it took up three-quarters of the comic, it still feels like it is lacking depth, there is major lacking in her character’s development, and the lack of dialog is really frustrating to me. What is most frustrating though, is that the other two plot lines are amazing!!!! More happens in those 8 pages than there does for all of Mulan! Those other two plot lines are easily 5/5! If Mulan’s story line had gotten cut in half this issue, and the other POVs went along further, this issue would have been amazing.

Here lies my problem: It’s not that I want to keep to reading this series; it’s that I feel like I need to keep reading. The story is that compelling to me. But I don’t why they are having some much trouble telling Mulan’s – the main character!!!! – side when the supporting characters and side plots are being told almost perfectly.

Am I going to continue reading this series? ABSOLUTELY. But am I going to be picking up issue #3. NO. This issue definitely took off and hooked me in with its plot like I was expecting it to, but it was only in certain areas… and the other ones stayed the same or went down.

My recommendation is to wait for volume one to come out. That’s what I’m going to do. I think I’ll probably enjoy the series more if I can read all the issue back to back. It’s still a very good comic, and if I had the money to spare, I’d probably still buy the monthly issues – but I don’t, and there are new series starting in September and October than I am excited about.