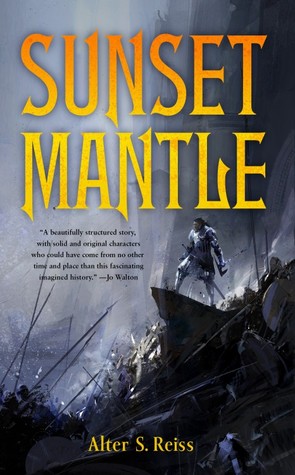 A tale of a legendary warrior.

With a single blow, Cete won both honor and exile from his last commander. Since then he has wandered, looking for a place to call home. The distant holdings of the Reach Antach offer shelter, but that promise has a price.

The Reach Antach is doomed.

Barbarians, traitors, and scheming investors conspire to destroy the burgeoning settlement. A wise man would move on, but Cete has found reason to stay. A blind weaver-woman and the beautiful sunset mantle lure the warrior to wager everything he has left on one final chance to turn back the hungry tides of war.

This story should have been called, “Sunset Mantle: The Legend of Cete“, because that who this story is about, Cete, and that’s what he is a legend; a warrior turned both hero and outcast, and this novella tells the tale of the days for which he will become known a legend.

Cete has come to the Reach Antach as a wandering outcast. He is not staying though; merely passing through. He has looked around and seen the signs that is not safe here. Wether it be in a day or a year, war and destruction will come, and with it, the lives of the people will be lost. Yet, when he passes the shop and sees the Sunset Mantle, that no longer matters. The mantle is the finest thing he has ever seen. He knows he must be going before the slaughtering arrives, but when the shopkeeper, Marelle, comes out, without realizing it, he offers to pay for a commission and pulls off his belt in exchange. When she refuses the belt – because it is a merit chain from the prince of the Hainst clan – she suggests putting it use again. Cete knows what joining an army entails, and what is coming to Reach Antach, but that Sunset Mantle (and the woman, Marelle, too) – he cannot resist, so goes in search of work.

Quickly Cete finds himself in the middle of those warning signs he had foreseen, and things are no longer about a his mantle. Cete must decide between protecting his own honor and protecting the lives of people of Reach Antach.

One of the first things that drew my to this story (aside from another amazing cover by Richard Anderson!) was the distinctive narrative voice. They way the story is told, Reiss made it feel like I was sitting around fire with my regimen, and I was hearing this story of Cete from some old, war-hardened veteran warrior. (If you’ve ever played the game Bastion, it the reminded me a lot that narrative style and type of voice). What the narrator chooses to point out and emit in the scenery, and what they decide to put an emphasis on, felt true to how a warrior would look at the world. That being said: while you can bet a warrior can tell a good battle scene (which I will get into later), they aren’t going to care what color the shutters of the shop’s windows are, how the merchants are lined up and selling what, or what way the wind in blowing. I love that kind of world-building – especially in fantasy – so I wish the story had been more description of the scenery to help me build a better picture.

Where the world-building is spot on though, is with the politics and culture. The way things work in this world is there are basically three, we’ll call them, establishments: city clans, reach clans, and tribal clans. City clans from time to time will create a reach and protect it while it is being built, in exchange for a debt. These debts will generally take hundreds of years to pay off and is almost impossible for reaches get out of. Tribal clans are people who are neither part of a city nor reach. It’s straight forward how that chain works, and Reiss does a good job at explaining it.

The culture of this world is unique. It’s almost like religion and law are one in the same. They do believe in God, and have a set of laws, but the same person who preaches at church about God, will also at the same time preach of the laws and how the rules work in church too. They are called scholar-priests, and I thought of it as a lawyer and priest in one. The laws themselves are heavily based on honor – i.e. listing to your commander no matter what, having the right to murder an intruder on your property, and doing wrong will cause shame to you, your family, and potentially your clan. The world feels very “ancient” with that, but at the same time the way the these laws are written and how some people try to exploit the loop holes, things can get very complicated and these scholar-priest almost end up acting like a judge.

It is this mixture of a reach’s debt and the manipulation of the laws in which Cete foresaw that danger and where he now finds himself.

Cete, obviously, is the star of the story. The first word that comes to mind when I think of him is “stoic”. He is a mature, wise, veteran warrior, who knows how to handle an axe, and seems to live his life for honor. However, is not always for the “honor” that the law describes. Wether it be for his personal or for a clan’s gain, he does what he believes is right – regardless of the law. Reminded me a lot of Ned Stark with how much he life is about that. The difference is that while Ned talked to Cersei, because it was the “right thing” to do, Cete would have stabbed a knife thew her throat, because even though the law said “no”, he would have believed it was the right thing to do for the people. He knows he would have to be killed for it, but he also knows the people will thank him for it.

Speaking of killing, I loved all the battles scenes! The fighting is, by far, Reiss’s greatest strength. They are fast, tense, brutal and gory! Once you see Cete fight for the first time (which reminds me, Cete has a little Bloodynine in him – if you know what I mean 😉 ) you’re going to be wishing for more! And the last part of the novella is essentially on giant battle 🙂

Sunset Mantle is an epic fantasy novel in novella form. And since I haven’t actually mentioned it yet, Cete is a character who is going to tug on reader’s emotions with the choices he make and what he has to endure and the situations he ends up in because of them. Although the law may not say so, I believe Cete is “honor”, and he may not look like it on the outside, and he has his flaws, but he is what I would call a hero.

(I found this after I wrote my review. I said when I was reading, the narrator made me think of Bastion. This here is pretty close to that, no?)