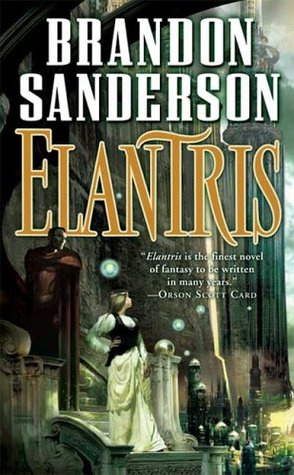 Sanderson is only one book away from becoming one of my favorite authors.

Elantris was the capital of Arelon: gigantic, beautiful, literally radiant, filled with benevolent beings who used their powerful magical abilities for the benefit of all. Yet each of these demigods was once an ordinary person until touched by the mysterious transforming power of the Shaod. Ten years ago, without warning, the magic failed. Elantrians became wizened, leper-like, powerless creatures, and Elantris itself dark, filthy, and crumbling.Arelon’s new capital, Kae, crouches in the shadow of Elantris. Princess Sarene of Teod arrives for a marriage of state with Crown Prince Raoden, hoping — based on their correspondence — to also find love. She finds instead that Raoden has died and she is considered his widow. Both Teod and Arelon are under threat as the last remaining holdouts against the imperial ambitions of the ruthless religious fanatics of Fjordell. So Sarene decides to use her new status to counter the machinations of Hrathen, a Fjordell high priest who has come to Kae to convert Arelon and claim it for his emperor and his god.But neither Sarene nor Hrathen suspect the truth about Prince Raoden. Stricken by the same curse that ruined Elantris, Raoden was secretly exiled by his father to the dark city. His struggle to help the wretches trapped there begins a series of events that will bring hope to Arelon, and perhaps reveal the secret of Elantris itself.A rare epic fantasy that doesn’t recycle the classics and that is a complete and satisfying story in one volume, Elantris is fleet and fun, full of surprises and characters to care about. It’s also the wonderful debut of a welcome new star in the constellation of fantasy.

Brandon Sanderson is slowly becoming one of my favorite authors. Elantris was the 4th work of his that I have read, and once again his story was keeping me up reading, late into the night. I essentially loved everything, hated nothing, and the only problems I had were little things.

Elantris used to be the most beautiful city in all the land; it would glow – literally. People who were the taken the Teod, who became known as Elantrians, would become silver and start glowing themselves. Then suddenly that all stopped 10 years ago. Elantris stopped glowing, became dull and grimy, and the Elantrians, too, became gray with black spots. This event became known as the Shaod, and future Elantrians taken by the Shaod – known as an almost diseases – were tossed into Elantris with the rest to die.

One morning Prince Raoden of Arelon awakens, and is shocked to find out that he has been taken the Shaod, and must be shipped off to Elantris. While most people would see that as a sentence of death, and just give up, Raoden will not. Once in the city, he enlist the help of man, Gallagon, and begins to try turn the city around and give people hope again.

Princess Sarene of Teod is Prince Raoden’s wife-to-be. Upon her arrival though, she learns of the prince’s sudden death. Sarene knows the political reasons behind this marriage, and becomes suspicious of this “sudden” death. She soon finds herself manipulating the king, and as a part of a co-conspitaro group, searching to find answers about the prince and other mysterious of the king.

In background, there is a battle amongst the land between the Korathi and Derethi religions. The Wyrn – head of the Dorathi religion – has sent priest Hrathen to convert the people of Arlen. The Wyrn has only given him 3 months to do so. If it cannot be done by then, the Wyrn will have to send in the demons.

The two main protagonists are Raoden and Sarene. Raoden is that golden, shining prince, whom the people love and can’t wait to replace the current King with. He is almost the definition of optimism, and is an extremely strong-willed character. Sarene has to be one the strongest female characters I’ve read. She is very witty, clever, and not at all afraid to speak to her mind. (I almost fell I love her. I wouldn’t put her in with the other three for my dream women of literature, but I would like a dash of her to be added). I got attached to these characters almost instantly after we met them, and from that first instant I knew they would be perfect for each other (if only the could only meet!) My little nit pick with them was that were always these perfect characters. Raoden never waivers from his optimism, and it never seems to cause him any problems. And Sarene’s strong personality was almost over-the-top.

I would say that our main antagonist was Hrathen, and I guess in-tun Wyrn, as well. As soon we are introduced to Hrathen, it was clear right away that he was going to be the antagonist, however he did not feel like a “bad guy” to me. I didn’t think he was a good character by any means to start, but to say he was “bad” felt very wrong. Unlike Raoden and Sarene, Harthen goes through a very interesting development, and was my favorite character is this story because of it. One character I did think was bad from the moment we meet him was Dalif. Hated him. Instantly. He gave creeps and I did not trust him.

One of the first things I ever heard about Sanderson was his magic system. The previous stories I read by him were in the Reckoners Trilogy so this was actually my first introduction to this supposed amazing magic system. It did not disappoint. I was fascinated by the Aons. The Aons are symbols that you draw to create magic. After the fall of Elantris though, they don’t work anymore! The idea of having to draw symbols to perform magic isn’t exactly original, but when Roaden starts to explore the past of Aons, we learn it is not nearly that easy. Aons are not simple squares and triangles (just look at AHHAHA!). It takes very delicate and precise drawing in order to make them work, and there are different drawing techniques and systems to make them works. What I liked most about Aons, was the story behind them, and how it was they were able to create this magic.

What I actually like most about the novel, was the story itself. It was not action packed by any means. There wasn’t any real “action” until the very end. But the novel had so much mystery, suspense, and political intrigue going on! Figuring out the magic system; Roaden trying to change Elantris; Sarene being herself; Sarene’s involvement in politics; Dilaf; Hrathen’s development; the Karate and Dorathi religions; and etc. The main plots, and all these little sub-plots, created that mystery and suspense in different ways. Never once in the story did I feel bored or not care what was going.

I had trouble putting this book down. I read this during a busy week, and my normal reading time they day was cut drastically down, and was left only with bed time reading. Despite having to get up early these days, I ended staying up until midnight or even 1 am reading! (The fact I also loved Sanderson’s writing probably helped too).

The only issues I had were, ironically, were in the plot. There were a couple of moments in the story that seemed major, but didn’t have a big impact or where never full explained later on (unless I missed it?), and there were a few odd characters that briefly came and went with no seeming reason. But I’ve heard something about certain characters reoccurring in all of Sanderson’s books in the Cosmere? So I’ll with hold my judgment of that. Then as I said before, with the exception of Hrathen, none of our characters really going through any types of changing or major development.

Really though, those issues are just minor things. It seems the better the novel is, the smaller the problems you end up picking out to comment on XD

Yeah, I loved this one. Awesome magic system, likable characters, great plot, and Sanderson’s writing is slowing become one of my favorites. Highly Recommended!