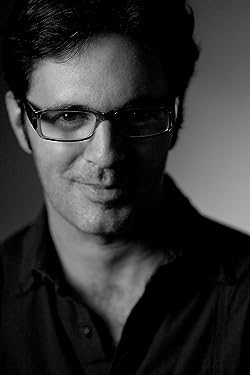 The basic premise of my book centers on what happens eighteen years after the Phoenix Lights incident. The V shaped ships have returned and it’s an all out attack on the central Arizona region. Additionally, I’ve incorporated the idea of a secret, underground facility—an Area 51 mirror site—buried in the desert near the Superstition Mountains. And in the book I imply that this site has something to do with the V’s showing back up.

In a world of reality TV shows that cover the unexplained and paranormal, I’ve built my lead characters around a documentary/reality TV crew who call themselves the UFO Busters. And needless to say, they’re going to get way more than they ever bargained for when the ships start falling from the sky over Phoenix.

ER: Apocalypse Weird is a series of books—the first community created bookverse—wherein different authors tackle various regions where some sort of apocalyptic event is taking place. Since I live in Arizona, it made perfect sense for me to tackle Phoenix. The key to Apocalypse Weird is that there are two events that happen in each book that tie all of them together in a larger story arc. My book has both of those elements and leaves itself several doorways or opening to other Apocalypse Weird stories.

DJ: Could you briefly tell us a little about your main character? Do they have any cool quirks or habits, or any reason why readers with sympathize with them?

ER: My two main characters are estranged siblings: Gage Slater and younger sister Kristina Slater. Gage works in a secret, government underground facility, ostensibly built as a defensive measure against an alien invasion. Kristina is a reality TV star and documentary filmmaker. Her TV show, UFO Busters, sets out to investigate all kinds of UFO related stories. But there’s a larger story behind it all. Kristina was abducted by a UFO as a child and no one believed her. She fights to prove these occurrences are real, but more importantly she wants the answer to the big question: why was she taken? Gage, on the other hand, feels guilty over his sister’s abduction and is trying to atone for it through his top secret work. But in doing so he’s alienated his sister and now there’s only bad blood between them. When the alien apocalypse explodes, they are thrown back together and must help each other survive. And in the midst of the pressure and the unraveling of the world, they discover even darker secrets from their past.

I think readers will really like Kristina, because she’s a tomboy, a world-class smartass and can hold her own with the boys. I had a lot of fun writing her character!

DJ: When I read, I love to collect quotes – whether it be because they’re funny, foodie, or have a personal meaning to me. Do you have any favorite (non-spoiler) quotes from Phoenix Lights that you can share with us?

DJ: I understand that you have recently released some other stories and are currently working on some new projects?

ER:   I have a short story coming out in Samuel Peralta’s Future Chronicles series. My story, “Hide And Seek,” will be included in the upcoming Cyborg Chronicles, which is currently in editing right now. I’m very excited about this one—it’s unlike anything I’ve written so far. Additionally I’m putting the finishing touches on a female driven superhero novella, The Greatest Adventures of Mighty Woman. This project was optioned for television a few years back by a major studio, but never got produced. The rights came back to me and I decided to novelize it. Look for that before the end of the year. It’s a mashup of Galaxy Quest and Supergirl. Beyond that I’m mulling a sequel to my debut novel, The Scout, and of course there’s Apocalypse Weird and the
prospect of a Phoenix Lights follow up.

ER: I’d like to know some of the most favorite alien invasion books, short stories or movies from your readers! 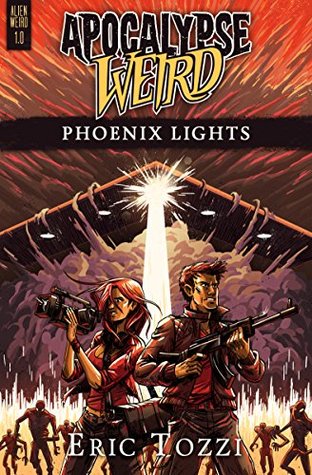 The Aliens Have Come to End the World…

On March 13, 1997, the incident now known as the Phoenix Lights left thousands of witnesses at a loss to explain the sudden appearance of the massive V-shaped craft that hovered in the skies above Phoenix that day.

Now, eighteen years later, the Vs have returned. Bargains will be made with an intelligence beyond our grasp deep within a super-secret government blacksite. Can a crew of TV UFO Busters find out the truth about the visitors or are they going to get far more than they ever bargained for? Whereas once they were blind, now they will see.

Welcome to the invasion.

Welcome to the Apocalypse Weird

Primarily I write science fiction. This genre is especially close to my heart. For over five years I worked for NASA at the Jet Propulsion Laboratory as a documentary film producer and editor, covering Mars Exploration (It’s funny how many times I’ve been asked if I am a rocket scientist). Getting an up close, behind-the-scenes look at planetary exploration gave me great inspiration for my debut novel, The Scout.

The iconic science-fiction writer, Ray Bradbury, was a personal source of encouragement to me. Having directed an award-winning short film based on the story, “Kaleidoscope,” from his book, The Illustrated Man, I had the opportunity to spend time with Ray before he passed away. His passion for writing and space exploration fueled me to the finish line on my debut novel, The Scout.

My latest book, Phoenix Lights, is set in the Apocalypse Weird book series and available now. Additionally I’ve completed a short story for the anthology Tales of Tinfoil (available now). I’m penning a short story for the upcoming Cyborg Chronicles (part of the Future Chronicles Book Series). On top of all that I’ve got a superhero novella that will take flight sometime in 2015: The Greatest Adventures of Mighty Woman Book 1: Resurrection. In its simplest pitch form, it’s a mashup of Galaxy Quest and Supergirl. Lots of action! Lots of fun!