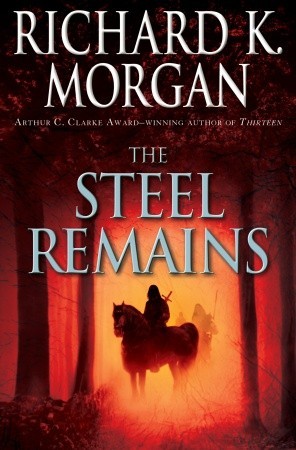 The Steel Remains (A Land Fit For Heroes #1) by Richard K. Morgan

I’ve read books with expletive language and violence, but this one here definitely takes the crown.

A dark lord will rise. Such is the prophecy that dogs Ringil Eskiath—Gil, for short—a washed-up mercenary and onetime war hero whose cynicism is surpassed only by the speed of his sword. Gil is estranged from his aristocratic family, but when his mother enlists his help in freeing a cousin sold into slavery, Gil sets out to track her down. But it soon becomes apparent that more is at stake than the fate of one young woman. Grim sorceries are awakening in the land. Some speak in whispers of the return of the Aldrain, a race of widely feared, cruel yet beautiful demons. Now Gil and two old comrades are all that stand in the way of a prophecy whose fulfillment will drown an entire world in blood. But with heroes like these, the cure is likely to be worse than the disease.

This book has sodomy, rape, sex (both hetero and homosexual); expletive, vulgar, and offense language; and it is graphic, brutal, and at times disturbing. This is how the WHOLE BOOK is. If you cannot handle this, you will not enjoy reading this one bit, regardless of what the story is about.

Ringil is the legendary war hero from the battle at Gallows Gap, where he famously fought and drove back the scaled people. Nowadays, things are different. He lives in small town, has free residents at a local inn for the use of his sword’s name, and he sells his war stories down at the tavern for food and wine. One day, he receives a visit from his mother telling him that she needs his help. He needs to rescue his cousin who has been sold off as a slave into sex-trafficking. Now Ringil must return home, where he hasn’t visited in many years – for good reason.

From the battle at Gallows Gap, Ringil has two companions. One was a half-Kiriath named Archeth. She is currently working as an advisor for the spoiled and arrogant king of the Empire. When there is an attack on a port, the king sends her down to investigate for the truth. Here she meets a women survivor who claims to have seen black demons of smoke and wind destroy everything. Black demons that she had once summoned.

The other companion is Egar, the leader of a Majak tribe. Edgar has never been on good terms with the priest, Poltar, but one day he may have gone too far. It appears that Poltar has the support of the Gods, and together they may finally take him down.

I rather enjoyed the first couple chapters of the book. It was extremely dark (in many ways), but the opening chapter with Ringil hooked me in, and because I had never read any writing quite like this before, I was interested to see how I would like it and where things would go. After that start though, I was about that close to DNF-ing.

I did not have a problem reading the explicative language or the graphic nature of the book, but it very quickly became an irritating distraction, and completely took me out the story. I understand that people in this world swear more than others, and bad bad things happen, but it was too much. All the langue felt way too over-the-top, forced, and almost unbelievable. For the longest time, I couldn’t tell the difference between our three main characters – they were all the same to me! Any type of personality or development Morgan was trying to create for these characters was completely overshadow by my disbelief of how people where talking. Then to make matters worse for me, as this was starting to get on my nerves, we were also beginning to start our world-building.

Let me say: I think the world-building in the story is exceptional. Obviously the language and violence of the world was extremely developed, but just as impressive was the history and lore. After those first few chapters where we meet our main characters, the next part of the story is focused on giving us the background of the events that lead up to where we are now. Morgan does a great job explaining this – the different religions of world; past battles and alliance; the background of Ringil; the Kiriath and Dwena. Everything developed very well and flushed out.

(Actually, one problem with this world. With exception of Arceth, it seem like every women is either a beaten-down, obedient, submissive sex-slave, or a more-than-willing and eager whore. Just saying.)

Unfortunately, this started when right when I was losing my patience with language; I was incapable of taking all this cool history in, because I was stuck thinking, “Okay, I get point: people sweat a lot! You can stop using the unnecessary amount of f-bombs!” Since in this part no real fighting-action was happening, and it was mainly lore, I honestly wasn’t interested in what I was reading, and this was where I almost put the down.

However, the action and my interest in the plot did pick up after this part, and while I did still notice the excessive language, it was no longer an eyesore anymore.

Aside from world building, the other strength of the novel I fell was the main character Ringil. When we first meet Ringil, I him pegged him as this washed-up, down-on-his-luck, ex-war hero bum, making a living by selling these old stories for a drink at the bar. He didn’t give a F about what anyone said about or to him, and did what ever the F he wanted. I simply hated the man, and wanted nothing to do with him. As time would prove, the latter half (not giving a F) was spot him, but the prior was very off. As we learn of his background, I surprisingly found myself being sympathetic towards him! And if I hadn’t been so distracted by all his swearing, I would have easily recognized that he was actually suffering from PTSD at the start.

By the way, he is also gay. You learn that within few pages; it’s no spoiler.

Due to my indecisive enjoyment of this novel, I decided that how I felt about the ending would ultimately decide whether or not I was going to continues on with series. Ending was GREAT.

I know I harped on A LOT about the language, but it really was a major distraction for me at the start. Once I got used to it, I think I was finally able to enjoy the story to its fullest. The fighting scenes, the characters, and world are great, and I am very confident if I went back and read this now, or was able to ignore the excessive language, this review would be much different and contain a lot more praise.

So yes, I will be continuing on with this series.

4 thoughts on “Book Review: The Steel Remains (A Land Fit For Heroes #1) by Richard K. Morgan”