Today I am interviewing Ferrett Steinmetz, author of the new urban fantasy novel, The Flux.

DJ: Hey Ferret! Thanks for stopping by to do this interview!

Could you start things off by telling readers a little bit about The Flux?

Ferrett Steinmetz:  It’s the story of a man who loves paperwork, raising a daughter who loves videogames.

What if I told you the man loves paperwork so much that he has come to work great acts of magic through filling out ordinary forms, and can conjure apartments out of nowhere simply by imagining that he’s completed all the leasing agreements?

What if I told you that the daughter was burned by a magical terrorist, and as a result had been accelerated into horrible powers that no eight-year-old should have?  And her love of videogames also kindled magic, and now she can create vortexes of mass destruction simply by writing “Black Hole” in a game of Scribblenauts?

And that the man is having problems raising his daughter because magic is flat-out illegal, and the government is trying its best to track them down?  And his daughter, who is going through a premature adolescence because she’s so powerful that literally no one can hold her back, has decided that she’s going to start killing cops?

Okay.  That sounds a little better.

DJ: Are there going to be any new characters introduced in the sequel?

FS:  Well, in addition to the cast of favorites returning – and if you’re a fan of the plus-sized kinkster videogamemancer Valentine, there’s plenty of her – there’s several new players arriving.  The King of New York – a mysterious power player – is heavily interested in what Paul’s daughter Aliyah can do, and his enforcer has a classical magic power that should send Aliyah screaming.

DJ: In case anybody (somehow) hasn’t heard about your incredible magic system, could you tell us how it works?

FS:  Absolutely!  Basically, in the world of THE FLUX, if you become obsessed enough with something, your devotion can punch holes through the laws of physics.  If you’re enough of a crazy cat lady, you’ll start to do crazy cat magic.  But at that point, you’re literally insane on some level, so your desires have changed – a felimancer can work great acts of cat magic, but she’s not going to use them to take over the world.  She’s going to create a safe spot for her cat-centered empire.

Yet the universe also hates the idea of magic.  It’s gone to great lengths to create these laws of physics – artisanal laws, if you will – and so whenever a ‘mancer does something cool, there’s a backlash called flux where the universe rains down terrible coincidences upon your head until the odds are evened out.  Which means that ‘mancers tend to have horrible things happening around them – buildings collapsing, mass deaths – which is why doing ‘mancy is illegal.

But you’re obsessed, you see?  If you could stop, you would never have become a ‘mancer…

DJ: I believe I heard in a podcast interview with you last year, that you originally got the idea for the ‘Mancer series from watching Breaking Bad?

FS: Sort of!  I was in a Mage campaign – and yes, roleplaying games are a huge influence upon the ‘Mancer series – and we were poor, and had no income, and someone joked that we should brew drugs.  And I said, “Screw that, if I’m brewing drugs, I’m brewing magical drugs.”

Breaking Bad was a huge influence, because I loved watching how ignorant Walter White was in trying to become a drug dealer.  But I soon realized that while Walter White was an anti-hero who did everything for selfish reasons of glory, I really find anti-heroes boring.  Paul is doing terrible things, yes, but he’s doing them because he loves his daughter – and in a weird way, his daughter has decided the world needs to be made safer for her father.

Everything awful that happens in this series happens because of love.  Which is, in a way, far worse.

DJ: Without giving away any spoilers, were there any types of ‘mancers that you weren’t able to get into Flex, that you were for The Flux? Or, since writing the first two books, do you find yourself walking around and thinking, “Oh! That would make a cool type of ‘mancer!”

FS: Oh yeah.  I’m writing the third book right now, and I still don’t think I’m going to be able to slot in the idea of a metamancer – someone who’s become so intrigued trying to figure out the various rules of ‘mancy that they’ve actually become a mancermancer.  Which is interesting, because each person’s magic in the series is deeply personal – their limitations come from their obsessions.  For example, Paul loves forms, and thinks that paperwork is mankind’s way of creating justice – so while he could theoretically embezzle money or create cash from nowhere, for Paul, using his magic for that sort of usage just isn’t how paperwork works.

So having a ‘mancer who could influence those rules would be really interesting.  Some day I’ll get there.

But yeah.  The King of New York was originally the enemy for the first book, until I realized he didn’t fit in thematically.  But now he does.  But I can’t tell you what his power is, because that’s a surprise…

DJ: When I read, I love to collect quotes – whether it be because they’re funny, foodie, or have a personal meaning to me. Do you have any favorite (non-spoiler) quotes from The Flux that you can share with us?

FS: The one question that resonates throughout the entire book is this:

“Maybe we do need to kill them. The question is, do you want to be the one who does that?”

DJ: Thanks for taking the time to answer some questions, Ferrett!

THE FLUX will be released on October 6 from Angry Robot Books. 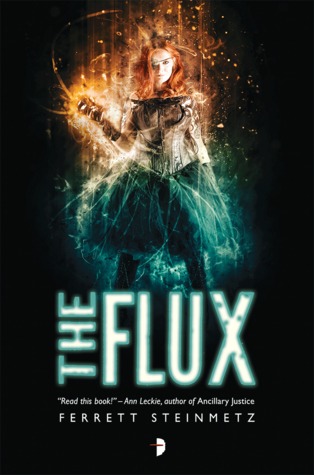 Love something enough, and your obsession will punch holes through the laws of physics. That devotion creates unique magics: videogamemancers. Origamimancers. Culinomancers.

But when ‘mancers battle, cities tremble…

ALIYAH TSABO-DAWSON: The world’s most dangerous eight-year-old girl. Burned by a terrorist’s magic, gifted strange powers beyond measure. She’s furious that she has to hide her abilities from her friends, her teachers, even her mother – and her temper tantrums can kill.

PAUL TSABO: Bureaucromancer. Magical drug-dealer. Desperate father. He’s gone toe-to-toe with the government’s conscription squads of brain-burned Unimancers, and he’ll lie to anyone to keep Aliyah out of their hands – whether Aliyah likes it or not.

THE KING OF NEW YORK: The mysterious power player hell-bent on capturing the two of them. A man packing a private army of illegal ‘mancers.

Paul’s family is the key to keep the King’s crumbling empire afloat. But offering them paradise is the catalyst that inflames Aliyah’s deadly rebellious streak…

Ferrett Steinmetz is a graduate of both the Clarion Writers’ Workshop and Viable Paradise, and has been nominated for the Nebula Award, for which he remains stoked.

He lives in Cleveland with his wife, who he couldn’t imagine living without.