DJ: Hey Marianne! Thanks for stopping by to do this interview!

Could you start things off by telling readers a little bit about Mythmaker?

Marianne de Pierres: Hi DJ! Great to meet you! MYTHMAKER is the sequel to PEACEMAKER, a story set in a future Australia about a park ranger and a US Marshall who have to work together to keep mythological creatures from overrunning the world. Their relationship is uneasy at best, and the series is action packed. I blend the Western genre with urban fantasy and a little SF.

DJ: Can you briefly tell us a little about your main character? Does she have any cool quirks or habits, or any reason why readers with sympathize with her?

MP: Her name is Virgin Jackson; an unusual name for sure, and chosen because it harks back to the old dime Westerns of the 50s and 60s. Virgin is single minded, a little anti-social, but passionate about the land and loyal to the people she loves. She’s been bought up without a mother, and her father died a few years before we meet her. There is a kind of loneliness about her; but essentially she’s a person of great integrity. During the course of the book she discovers that she has the ability to see Mythos – mythical creatures from another realm.

DJ: What these Mythos creatures are all about?

MP: The Mythos represent all the mythological creatures that humans have written about for years: everything from Vampires to Yetti and the Loch Ness Monster. In this story though, they are creatures from another realm who find ways to break through into our world. When we meet Virgin and Marshal Sixkiller, that situation is at tipping point. While some Mythos appear to everyone in various guises, some can only be seen by extraordinary people like Virgin and the Marshal. Hence it falls to them to try and stem the flood.

DJ: The Peacemaker series take place in a future Australia, how much of present day Australia was used as an influence for the future you created?

MP: The east coast of Australia is slowly turning into a giant super city, so the over-crowding and over population in the novel is an extrapolation of the growth in our current day coastal settlements. Also, we are also heavily influenced by American pop culture, and I seek to show that in the worldbuilding.

DJ: What type of research did you have to do for Mythmaker?

MP: I spent a lot of time reading about Mythological creatures and choosing which ones to bring into the story. I preferred to use a few that are not so commonly spoken about, such as the Pocong and an Empusa. And I almost always have to research weapons. Futuristic weapons can present a conundrum. You have to select something that is different yet credible, especially when you’re fighting “imaginary” creatures. I like to start with a weapon or object that already exists and build on its logic. Hence the ionic disruptor the Virgin uses in the final scenes.

DJ: When I read, I love to collect quotes – whether it be because they’re funny, foodie, or have a personal meaning to me. Do you have any favorite (non-spoiler) quotes from Mythmaker that you can share with us?

MP: “I think I liked the man I just had lunch with. Now that was something weird.” ~Virgin Jackson.

MP: Thanks so much for inviting me for a chat, DJ. It’s been fun 🙂

DJ: You are very welcome, Marianne! Thank you so much for taking time out of your day to answer my questions! 🙂

MYTHMAKER is on sale now from Angry Robot Books 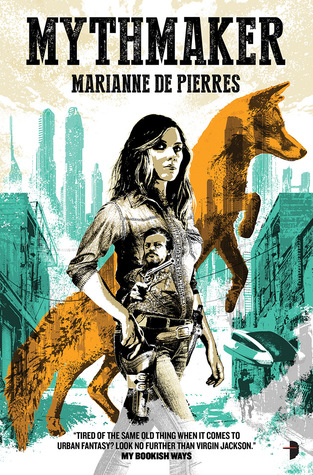 Virgin’s in a tight spot. A murder rap hangs over her head and isn’t likely to go away unless she agrees to work for an organisation called GJIC with Nate Sixkiller as her immediate boss. Being blackmailed is one thing, discovering that her mother is both alive and the President of GJIC is quite another. Then there’s the escalation of Mythos sightings, and the bounty on her head. Oddly, the strange and dangerous Hamish Burns is the only one she can rely on. Virgin’s life gets… untidy.

Marianne de Pierres is the author of the acclaimed Parrish Plessis and award-winning Sentients of Orion science fiction series. The Parrish Plessis series has been translated into eight languages and adapted into a roleplaying game. She’s also the author of a bestselling teen dark fantasy series entitled Night Creatures and writes award-winning crime under the pseudonym Marianne Delacourt.

She lives in Brisbane, Australia.