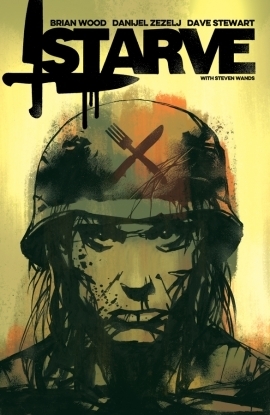 Great follow-up to last month issue! My guilt of that I maybe should be feeling sympathy for Greer is gone. I hate that women. Gavin continues to prove why he is such a unique and great character. And as for the Starve episode, well, lets just say, there will be blood.

On this episode of Starve, they are doing a challenge called, “Kitchen Battle”, where teams of chefs must go from station to station cooking in sub-optimal conditional. Usually, this lasts for 6 hours, however, thanks to that Greer influence, the challenge will now last 24 hours, and chefs will have to travel to locations around the city. And the staff of these Kitchen there? Well, they are order to actively resist.

As Roman says, “And it’s going to be a fucking bloodbath, just you see.”

Any chance Greer had of getting my sympathy was gone after the first page. I understand that she is mad at Gavin for leaving, but she seems to be convinced she was only a cover, blames him for stealing her youth and such, and is also convinced he is only using Angie as an emotional tool to win Starve, and, of course, as a tool to get back a herself. Wether or not Gavin actually used Greer as a cover or if he truly loved her a one point, we don’t know. We still don’t have Gavin’s account of the events. However, we do know his intentions of Angie. And using her on the show was not for the judges, and pissing of Greer was just an added bonus. He did all those thing because he loves and missed his daughter, and feels guilty about his past with her. If you had any doubt about his intention before, this issue erases chance of thinking he is anything but a caring father trying to protect his daughter.

Now, this “Kitchen Battle”; it is literally what it sounds like. That cover art isn’t a metaphor; it’s what Gavin actually wears. He grabs two other chefs before the events starts and tells them to grab weapons, to swing for the neck and kneecaps, and throws on his army helmet. They then walk into their first restaurant. Gavin kicks down the door and says, “We fight, we cook, we win. That simple.”

I know this sounds, and looks, completely over the top, but it fit in so perfectly to who Gavin is a character, the length at which Greer and Roman will go to stop Gavin, and what this world and show has turned in to. They aren’t running around with knives slashing each other, it’s like those large wooden spoons and rollers. Not going to kill anyone enough, be enough to causes some bruises and make them give in.

Speaking of Gavin, while we are in prep for battle, Gavin gives us a background into his and Roman’s history.

The only problem I had was the ending was very anti-climatic. We get the great tension with Greer at the beginning, and then the awesome action and tensions of the fight and cooking, but the ending felt too out-of-place. Went too quickly from faced paced to emotional.

And this week we get a nice recipe for Squid with Bacon and Garlic! Yum Yum!