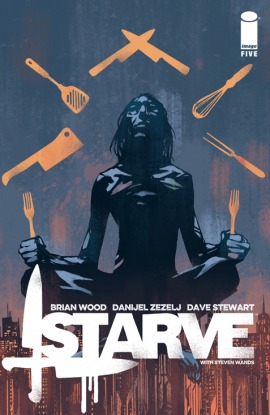 Thus endeth the first story arc with the the showdown at Master Paleo BBQ. Platters of smoked meat and life lessons learned, what’s not to like?

And so this brings us to the end of Starve season one. While this wasn’t the most action-packed or tension-filled issued, one thing it did have was plot twists. Multiple jaw dropping plot twists!

I’m going to go light on the plot and this is going be a brief review in general because, incase you haven’t started reading any of the series yet, I don’t want to spoil anything.

Starve #5 is a continuation of last week’s “Kitchen Battle”. Gavin is now at the Master Paleo Bbq, which is head by Chef Iz, who is actually on old friend.

At the same time Gavin’s battle is going on, Angie is with Sheldon at a bar talking about her father, and trying to figure out what to do about him and her mother.

After finishing this issue, I don’t even know what think anymore. There were character actions that left me speechless, revealings of certain information that made me reevaluate character motives, and a couple particularly shocking moments that will have serious effects on the direction on the plot.

Now that I think of it, this fells like the first time, we have had an issue that was heavy on the plot – and it was nice. I don’t want to try to give any hints as to what might happen, but just WOW. Aside from the plot, again we have a focus on Gavin’s character. It seem likes every issue is mainly focused on developing this man, but we need it. Gavin is a complex, deeply flawed individual, living with the pain of guilt and regret. And whether he likes it or not, his daughter, Angie, is stuck in between this battle between him Greer.

Throughout the series, we have only been hearing Greer’s sides of their story, and in this issue, we still don’t have Gavin’s, but we do
get Angie’s recollection of what happened. And in my opinion, that changed everything.

One thing that bothered me is that Sheldon comes back and is hanging with Angie and says Gavin is almost his best friend. Nothing wrong with that, but it seemed very out-of-place. I can’t recall Sheldon even being in the last two issue or having that big a role if he did. But I’m assuming more will be explained later.

Weirdly enough, with all the shocking turn of events and major plot twists, I was left feeling underwhelmed with ending. All that hype leading up, and the last page made me say “that’s it?” Don’t get me wrong, I am beyond excited for the next part of the series to see what next season has in store and to see where the Gavin’s story is going to go now. But recent events have me a little confused as to where that direction may be. Super excited, but slightly confused about what will happen now.

Issue #1 (my review) may have started out as a story about a chef trying to regain control of his hit TV show, but it has slowly been evolving well beyond that, and this issue was a set in a new direction.

Starve Volume 1 comes out January 2016, and I’d recommend checking it out.