Today I am interviewing Stephen Zimmer, author of the new sword and sorcery, dark fantasy novel, Heart of a Lion.

DJ: Hey Stephen! Thanks for stopping by to do this interview!

For readers who aren’t familiar with you, tell us a little about yourself?

Stephen Zimmer: I’m a guy who keeps moving forward, but one of the things that is a very special part of me is that I am a writer, a path that calls you to create, live, and grow. The genres that I have been published in include epic fantasy (Fires in Eden Series), cross-genre (The Rising Dawn Saga), the Rayden Valkyrie tales (such as the Dark Sun Dawn Trilogy), steampunk (the Harvey and Solomon tales), and horror (the Hellscapes short story collections).

I am into a lot of things, ranging from music and guitar playing, to martial arts and history, and travel, and all of it factors into my writing path. But at the end of the day, I’m just me, a guy doing his best to become his personal best.

DJ: What is Heart of a Lion about?

SZ: Ultimately it is about courage and being willing to do the right thing, even when you have to stand alone to do so. But Heart of a Lion is a story that follows the warrior Rayden Valkyrie on her journey back to the northern tribal lands where the people that adopted her as a child, following a terrible tragedy, live.

She has just completed a major task for a people far, far to the south, and she will have to cross a desert, ocean, and mountains to get back. On the way, her journey is sidetracked when she rescues a young boy about to be sacrificed to a malevolent god, but the detour takes her on a collision course with a rising empire that involves some rather dark supernatural elements itself. This is the first book of the Dark Sun Dawn Trilogy and is hard-hitting, dark-edged sword and sorcery.

DJ: When I see your cover, I immediately think, strong female protagonist. And with that sword, I know she is going to be kicking some butt! In short, Rayden Valkyrie looks like she is going to be badass. Is my assessment accurate? What were some of your influences for her?

SZ: Oh, no doubt, she is very badass and she takes care of business when she has to, haha! And what the cover does not show is that she fights with a hand axe as well, wielding both sword and axe in combat (and very adept at hurling the axe too!).

The idea for Rayden came to me at once during a time I was adjusting and contending with some great storms in my own personal world. I got the image of a golden-haired, defiant female warrior, who I knew walked the world alone with no place to truly call home. Despite the hardships that led to her walking that path, I knew she lived with honor and had not lost compassion and kindness. She is a warrior in all respects, not just physical ones. Mentally and spiritually, she is strong and determined. She came to me and inspired me when I really needed it.

She also demonstrates the strength of more specific, feminine natures, which I feel is strongly reflected in the way she responds to, cares for, and protects the young boy in Heart of a Lion. All too often we think of the blood-letting activities like being able to fight as strengths, but I feel some of the greatest strengths in the world, such as those of a motherly nature, should be shown for the great strengths that they are.

DJ: I also get the feeling that there is going to some sword fighting? What is it you like about writing fights scenes?

I really enjoy the choreography of a fight scene and by extension a larger battle scene. I also believe that a fight scene can bring out something more about a character, which gives me another challenge as a writer. Rayden is very fun to have in a fight scene, as she fights with both sword and axe at once (and throws that axe very well!).

I draw as much as I can from my own experience training in martial arts, and handling weapons like swords and axes. I have a feel for their weight, how they are used, and how they move, and that helps a great deal when writing a fight scene. I also do additional research, especially regarding larger battles, in the ancient and medieval world to help round things out. Hopefully the result is an enjoyable fight scene for the reader that also might say a little more about a given character.

DJ: Are there any books or authors that were influences for your fantasy writing, and writing in general?

SZ: I have had a great many influences, and as I discover more writers who inspire me, that list continues to grow. My roots were J.R.R. Tolkien and C.S. Lewis, the first fantasy authors who kindled the flame in me that led to becoming a writer. Others include Glen Cook, Roger Zelazny, C.S. Friedman, Guy Gavriel Kay, David Gemmell, Robert E. Howard, George R.R. Martin, R.A. Salvatore, Sir Walter Scott, and Clive Barker. More recently, I’ve really been inspired by the works of the amazing Paulo Coehlo.

DJ: When I read, I love to collect quotes – whether it be because they’re funny, foodie, or have a personal meaning to me. Do you have any favorite non-spoiler quotes from Heart of a Lion that you can share with us?

SZ: “You were born with gifts and a purpose.” – Rayden Valkyrie

SZ: Now that Heart of a Lion is out, what is next for you? I believe you are also releasing another novel as well?

SZ: This past week saw the release of Hellscapes, Volume II, the latest in my growing collection of horror short stories. This is very different in style than Heart of a Lion. It is a very visceral, macabre style of horror where each tale features a different depiction of hell containing a condemned soul in the process of discovering their fate.

It is an exploration of evil, and the kinds of evil that there are, both simple and complex, and the setting of hell gives me tremendous range in symbol and metaphor to depict those kinds of things.

As far as writing goes, I’m working on the followup to Heart of a Lion and the fourth in the Fires in Eden series, as well as some various short tales.

SZ: The places I stay active include the following:

For those on Facebook who are really into my work, I have a reader forum called Stephen’s Seventh Legion, which can be found at: https://www.facebook.com/groups/1412648435707294/

SZ: The greatest school for being a writer is life itself. Learning, experiencing, and growing. Meet people from all walks of life, travel different places, eat new foods, try different activities. Being a writer calls you to experience, something I have come to appreciate more every year. Go see, do, and live!

Stephen Zimmer: You are most welcome and thank you for the opportunity to visit with you! I hope you enjoy meeting Rayden and going on adventures with her! 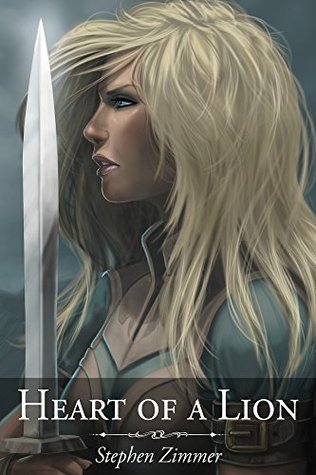 Rayden Valkyrie. She walks alone, serving no king, emperor, or master. Forged in the fires of tragedy, she has no place she truly calls home.

A deadly warrior wielding both blade and axe, Rayden is the bane of the wicked and corrupt. To many others, she is the most loyal and dedicated of friends, an ally who is unyielding in the most dangerous of circumstances.

The people of the far southern lands she has just aided claim that she has the heart of a lion. For Rayden, a long journey to the lands of the far northern tribes who adopted her as a child beckons, with an ocean lying in between.

Her path will lead her once more into the center of a maelstrom, one involving a rising empire that is said to be making use of the darkest kinds of sorcery to grow its power. Making new friends and discoveries amid tremendous peril, Rayden makes her way to the north.

Monstrous beasts, supernatural powers, and the bloody specter of war have been a part of her world for a long time and this journey will be no different. Rayden chooses the battles that she will fight, whether she takes up the cause of one individual or an entire people.

Both friends and enemies alike will swiftly learn that the people of the far southern lands spoke truly. Rayden Valkyrie has the heart of a lion.

Heart of a Lion is Book One of the Dark Sun Dawn Trilogy.

Stephen Zimmer is an award-winning author and filmmaker based in Lexington Kentucky. His work includes the cross-genre Rising Dawn Saga, the epic fantasy Fires in Eden series, the sword and sorcery Dark Sun Sawn Trilogy, featuring Rayden Valkyrie, the Harvey and Solomon Steampunk tales and the Hellscapes and Chronicles of Ave short story collections.