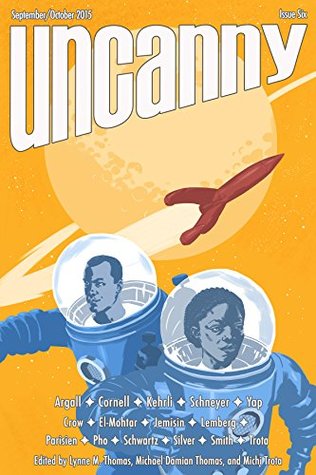 The September/October 2015 issue of Uncanny Magazine.

All that plus two podcasts!

Episode 6A: Editors’ Introduction, Paul Cornell’s “Find a Way Home” (as read by Erika Ensign), Rose Lemberg’s “A Riddler at Market” (as read by Amal El–Mohtar), and an interview with Paul Cornell conducted by Deborah Stanish.

***Note: All these stories, essays, poems, and interviews are free online at UncannyMagazine.com, and by clicking on the the name of each will bring you to them.

Gary is a quiet, 12 year-old boy, not really any friends, and has a mother that doesn’t seem to take too much attention to him. While out in the woods, he sees a silver space craft fly over head. He goes to investigate and discovers a sphere shaped object object on the ground that has an alien inside. Quickly Gary find himself on the run from the military with the alien and sphere.Nothing very new or inventive here.

Straight forward story about that quiet, lonely kid who finds the alien and thinks that now this is a chance for people to notice him. Still though, it delivered a lot of messages.

It was a fun and uplifting story that I believe everyone should enjoy.

((I should mention right now, as the editor does too, that this story has TRIGGER WARNINGS. Nothing is described in detail, but it is very obvious about what events are taking or have taken place.))

Akira is a boy who has lived a hard and abusive life – from witness his house burned down to receiving daily beatings and being used for please with his older brother. He is sold off to an army one day passing by, leaving his brother, the only who seemed to care for him, behind, presumably for ever – where condition do not much import and his mental outlook on life only grows worse. In the army he becomes a servant and an outlet for anger that soldiers may have. Things change thought when one day, when Akira meets a girl named Someyama, the new oiran (a women of pleasure) is brought to the army.

This story talks about youkai and oni, who are basically demons in Japanese folklore, Akira’s story and his relationship with Someyama hit my right in the heart, and while the story is powerful with emotion, it strong with it’s gore and horror elements as well.This is also told in second person, and done very well. So, Akira is actually “you”.

I haven’t finished all the short stories yet, but I find it hard to believe that there will be a better one this issue!

EDIT: I was the best story this issue 😀

Our narrator sister is missing(?) or, at least, our narrator doesn’t know how to contact her. However, her sister does. She received letters in the mail from her that contain pieces of train. When she opens the letter, a wheel frame might fall out, or underneath the stamp, there might be nuts and blots. The narrate believes that is she puts the train together, it will take her to wherever her sister is. She also has a neighbor Stacy, who has a young daughter, Becky, who is best at everything she does… as long as it starts with a “B”.

This was an incredibly sweet story: seeing out narrator trying to piece together the train, and figuring out where he sister might be, or trying get Becky to help her put things together. All I could at that was, “Aw, she’s so cute!” And Becky can only do things that start with “B”. For example: she fails at math, but call it “Business Basics” and she’s a wiz. So asking Becky for “help” can be rather challenging… Also, that whole train in the envelople was so cool!I think a lot of people will love this story.

And Never Mind the Watching Ones by Keffy R. M. Kehrli – 4/5 Rating

They are together on dock with the alien(?) frogs with glittering belies. (No one know what deal is with these frogs are, except they are EVERYWHERE – in stores, in people’s houses, and regular hope around on everything including people.) They begin to talk about school: Aaron is under the impression that they will be going to school together, but when Christian drops a bomb by saying he is going off to Dartmouth – a school were Aaron was rejected – and acts like it is no big deal, Aaron walk from Christian to never seen him again. The story then jumps around to multiple POV’s that all, someway or another, have to do with Arron and the glittering frogs.

I love multiple POVs, but it is a rare things in short stories 😦 However, Kehrli did an excellent job with it here. Outside of Aaron and the Christian, each person’s sections seems completely unrelated to Aaron, at first, but as you get to the end of each of them, and read more POV, slowly, the bigger picture begins to emerge.At the end of each POV, there is brief little section about these glittering frogs. Wether it be a Youtube video, a gif, a website – something that gives little clues about the frogs. These glittering frogs things are extremely strange mystery.

Sinners, Saints, Dragons, and Haints, in the City Beneath the Still Waters by N. K. Jemisin – 3.5/5 Rating

Toochie has live in New Orleans his whole life, and despite the raining, flooding, and other people leavings, he does says home. When the flooding first starts he has a conversation with lizard – similar to an alligator excepts with wings. The lizard too tell him to leave. The next day the water has flooded street and into his house. He helps his neighbor, an elderly women, to survive the storm, but she thinks there is more to this storm than rain. She thinks there is a Haint. Toochie think it religious superstitions but when something strikes their barge in the night, he begins to reconsider.

I don’t recall the storm actually being given a name, but the magnitude of the storm, the flooding, the evacuation, and the (lack of) help – I am going to assume this story was inspired by hurricane Katrina. If you were affected by that storm, I am sure that this will story will mean more to you more than others.

With Toochie, Jemisin is able to really shows how much of a survivor he is; how strong his love and pride for his home is – this includes both his city and the people in his city. There is a powerful message, a couple actually, that would I to say what are, would spoil much of the story. But know that they are there.

A Brief History of MidAmeriCon by Steven H Silver

Diversity Panels Are the Beginning, Not the End by Michi Trota

Masculinity Is an Anxiety Disorder: Breaking Down the Nerd Box by David J. Schwartz

A Riddler at Market by Rose Lemberg – 4/5 Rating

Beautiful poem and imagery; a must read for foodies.

To a Dying Friend by Dominik Parisien – 3/5 Rating

The poem goes continues on with when “them” saying how women should, and women trying to hold their tongue and act this this ideal and perfect women, but they can only hold so much blood in their mouth and stomach until they have to let it all out.

The Book of Longing by Jennifer Crow – 3.5/5 Rating

If you aren’t already, I’d recommend considering a subscription —> UncannyMagazine.com