This was both an awesome and psychedelic trip!

An eye-searing, mind-bending, gender-shattering epic science fiction retelling of Homer’s Odyssey starting with the end of a great war in the stars and the beginning of a very long journey home for Odyssia and her crew of warriors. The journey to Ithicaa begins HERE, by Matt Fraction (Sex Criminals) and Christian Ward (Infinite Vacation, Olympus).

Man, there is so much in this comic series that I am digging! It’s a sci-fi retelling of the Odyssey, that takes place in this cosmic, trippy/psychedelic universe where telepathic ships are used for transport! I say psychedelic trip (pun intended), because look at at the art style and coloring! The best freaking part of this comic though, is the genre-twist! Odysseus and all the Olympians… they’re all women!

Odyssia has just finished her war on the planet of Troiia-VII defeating the last of men. Now at last, her and her crew may finally return home to Ithicaa. However, Mother-Father Zeus and the rest of the Olympians are not yet bored and still seek entertainment from the warrior. As Odyssia begins her synchrony-sleep piloting of the starship ODY-C to return home, Poseidon begins with her interface, throwing the starship far, far off course. 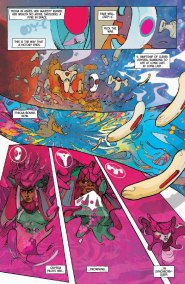 This first volume of ODY-C contains the first 5 issues, and takes us from the start of Odyssia’s journey home, to the planet of Kylos – home of the Cyclops – and finally through the meeting of Aelous, lord of Aeolia. My memory of The Odyssey is quite rusty, so with a quick spark note, I believe that takes us to about book 10 or 11?

Let’s start with one negative: this story is hard to follow along! This comic will not be for everyone. I don’t care if you have spark notes open to side reading along with this thing – it’s not going to help much. ODY-C does follow same story line and hit all the major events of The Odyssey, but this is a MAJOR retelling. Example: We do battle the Cyclops, but what actually happens in that battle is nothing like what happens in the epic. It is not simply Homer in space. Oh no, no. More like Homer is space on acid. I don’t think I’ve ever spent so much time on a single issue re-reading and going back to try and figure what exactly is going on. However, once I was able to grasp what was going on, how things work in this world, and who all the characters were – this comic was freaking awesome! 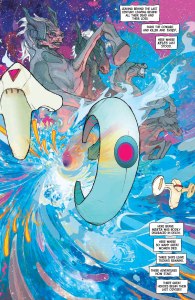 First thing everyone is going to notice about this comic is art style and coloring. I mean, just look at the cover! The retelling takes place in deep space, and when I think of deep space, one of the things that comes to mind is all those nebulas and brightly colored gas formations. Then, taking into account the uniqueness and imagination of Matt’s retelling – Christian’s style and coloring scheme fits in so perfectly, adding to the weirdness of the story, and bringing the tale to life. I loved the art! Part of me was hoping (and half expecting) that during the battle with Cyclops, Odyssia was going to reach into her pocket and ask Jerry for help XD

As I mentioned above, Matt follows the major story line and events of The Odyssey in his retelling, but really he does his own thing with the story. I love how much he took this classic epic and put a sic-fi twist on it, and how much of his imagination he put into it. He simply could have take Odysseus from the ship and put him in a starship – that’s sci-fi. But instead he put him in a telepathically controlled starship. The same goes for that Cyclops battle. He doesn’t just throw a robot in there, or replace one thing to make it have that “sci-fi” feel to it. He takes that whole scene from the epic, and is able to interpret it and put his own twist on it to fit with his own version.

My favorite twists he put on this, and what I feel makes this series, is that Odysseus is a women! And her name is not Odysseus, but Odyssia! Zeus and all the Olympians are women. Zeus had sent Odyssia to Troiaa-VII to destroy the last of men, and  the gender of men is essentially illegal and women marry other women or this third gender called “sebex”.

It’s kind of a paradox reading this. It is obviously clear that the comic is following the same story, and everything that happens here is an interpretation – but the retelling is so different that at times if feels like you reading a completing different story! Truly, this comic is fascinating. It is weird – very weird – but it’s that cool and awesome weird.

Wether you are familiar with The Odyssey or not, I don’t think it will really matter because you are most likely going to have troubles with the start, and possibly throughout the comic. But if you are willing to take your time to sit down and grasp what is going on, this comic will blow your mind!

Most definitely not for everyone, but despite all my struggles to start, it was absolutely worth; I LOVE this comic. If you are looking for something that is totally out there, and will give you a trip like no other, look no further.