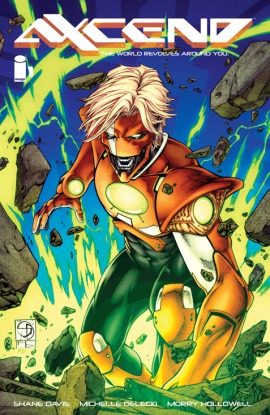 What happens when a video game decides to come to our reality to play? When there are no extra lives, and Armageddon looms on the horizon, when your life revolves around gaming like teenager Eric Morn, you Press Start.

Has anyone who has ever played video games not wanted to somehow jump in that game and make it your reality? I know I have. That’s why I love the anime Fantasy Star Online, the show Video Game High School, and the novel Soda Pop Soldier (my review). Being able to somehow jump into the game, or make the games appear to be more of a reality, would be beyond awesome! I’m always going to pick up a story like that! With this new comic series, Axcend, we have another series where our protagonist is able to jump into a game’s world. If this were a video game though, it would be equivalent to all graphics and no gameplay.

Eric Morn is a senior at high school and today is a difficult day for him. It marks the one year anniversary of his twin brother’s passing. Ever since that day, Eric has become more and more withdrawn from kids at school, his mom, and most social activities. The only means he has to escape the pain of his daily life is video games. On this day, when he gets home from school, after a rough encounter with a bully and not wanting to talk and see his mom, Eric sits down to play some games to escape. He finds out that he has been selected to be a beta-participant for the new game, Axcend. When he accepts the invitations, he suddenly axcends into the game itself.

Let me stop you all right here quick and maybe save you some time: If you aren’t a fan of video games, I highly doubt that you will like this comic. I like video games, and I did not think there was anything special here.

Axcend sounds like a great idea for a story. A troubled teen looses someone very close to him. He becomes somewhat rebellious and withdrawn from who he usually is, and to escape the reality of this situation he turns to video games. Suddenly, said video game brings him into the world, and, presumably, he finds a new love and happiness in this game’s world, and that is where we find the story’s main plot and conflict. But that vague outline is about how deep the comic actually went

I don’t even need to describe Eric, because I already did above! Generic troubled teen; loses family member; turns to video games for escape. Nothing special. At the end of the issue, Eric is talking with his shrink and even that did nothing for his development. It reveled things I already knew or could (and did) simply guess at. No where at all did his character stand out.

After the very generic-y feel to start, I was at least hoping the video game would take hold – but it was a no again there.

Axcend beta is apparently only 3 people. The other two players, Rayne and Ruin, seem to been lvl 100 while Eric is the definition of a n3wb. The video game pages are pretty much a collage of him being killed in different ways, and then it ends with a few panels of the different gameplay modes – all which show him dying again – before we come back to the real world.

It was obvious that Shane Davis was trying going for that humor with Eric getting all his gaming powers at fist, and then being uncontrollably slaughtered by his opposites left and right, but we didn’t learn anything about the game. It is literally just pages of him dying from Rayne and then Ruin’s hands, and then different game-mode panels. Aside from the fact that Eric can be in the game, I have no reason to be invested or interested in what the Ascend game is about. And while Eric is dying, he is saying these funny one-liner comments, and Eric’s narration thought the whole comic is that teen, sarcastic funny. Again though, everything Eric says, his dialog and narration, was so clique and predidactle.

((And in my opinion, the writing is general – prose, character, plot, dialog – was very simplistic and basic))

I need to give shoutout out the art before this review is done. I loved loved loved that art! The drawing and colorings are spectacular! Do you see the pages I posted in this review?! Just look at them and the cover! I just wished I liked the story even half as much as I like Shane’s drawing.

There is always the possibility that things could change in the next issue. It does end with quite a shocker – but that one shocker is not enough. I can’t say anything was done bad here, but I can say everything about it felt generic. There was nothing for me to latch on to. Even video game itself, maybe if what the game was had been explored it’d be different – but it wasn’t. And despite that ending, I have zero interest in going on. If you an artist though, maybe want to pick this up. Otherwise…