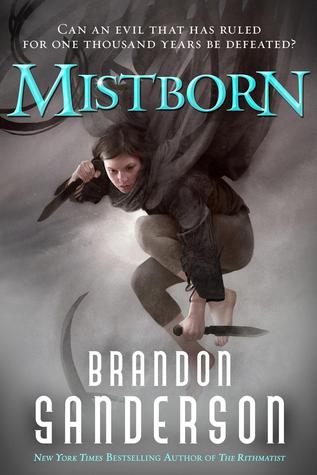 It’s official: Brandon Sanderson is one of my favorite authors

Following on the heels of Sanderson’s successful launch into the YA market with the New York Times bestselling Rithmatist comes Mistborn, now repackaged for the teen audience

Once, a hero rose to save the world. He failed.

For a thousand years since, the world has been a wasteland of ash and mist ruled by the immortal emperor known as the Lord Ruler. Every revolt has failed miserably.

Yet somehow, hope survives. Hope that dares to dream of ending the empire and defeating the Lord Ruler. A new kind of uprising is being planned—one that depends on the cunning of a brilliant criminal mastermind and the determination of an unlikely heroine: a teenage street urchin named Vin.

Once, a hero rose to save the world and failed. This time, can a young heroine succeed?

I was late coming to the Sanderson party, with this year (2015) being the first time I ever read him. But since joining in, I have partied hard! XD Mistborn: The Final Empire is the fifth book I’ve read by him this year, and, like all the other books, I had essentially zero problems, went through the book like nothing, and was up reading entirely too late.

Vin is a part of a small time thieving crew in Luthadel’s underground. She does not live a happy life by any stretch of the word: she was abandoned by her brother, is constantly beaten, and being a women surrounded by men at all times presents other types of dangers. One thing that helps to keep her alive is her Luck.

The crew boss takes Vin with him to a meeting with an obligator that they are trying to pull a con on. With Vin, and her Luck, they are able to pull off the scam and walk off with thousands of boxings. When they leave the building though, they are follewed by a Steel Inquisitors who has sensed Vin’s Luck. Luckily though, watching all this is Kelsier and Dockson, and they, too, know what Vin can do, and want her. However, they do no plan to kill her – unlike the Steel Inquisitors. Their plan is to recruit her into their crew that’s planning on overthrowing Luthadel and the Lord Ruler.

Luthadel is a depressing place to live – at lest for the skaa. They are essentially slaves working on farms for little to no pay or food. They are murder by the Nobels like it is nothing, and are seen as less than human, and of no intelligence. Those that aren’t farmers, seem to be homeless, living in a city where ash is constantly falls from the sky. In Luthadel, there is no color to the flowers, grass, or trees. Everything is colored black and gray, and is covered in black grit and many layers from the ash. At the night time, this is when the mist roles in, and is rumored to contain these creates called mistwraiths.

The conditions are like this because of the Lord Ruler; because he was the chosen Hero. Once, he was a regular, modest man who was called upon to defeat The Darkness and save the world. So what happened to him to make him so ruthless? He makes it so the nobles rules over the skaa, and his obligators and steel inquisitors over the nobles. These obligators are feared even by the nobles with these mysterious circle tatoos and marking surrounding their eyes – but the Steel Inquisitors are the worst. Walking around with steel stakes going threw both eyes, they are extremely powerful and rumored to be near invincible. Who is invincible is the Lord Ruler. Ageless, immmortal, and piece of God, itself.

The thieving crew that Kelsier is putting together is quite an assortment of characters – all of whom I loved. Their group dynamic was amazing, and I would love to talk about all of them, but for the sake of word-count, I will just talk about Kelsier and Vin – both of  whom are greatly flawed and complex.

Kelsier is known as the Survivor of Hathsin. A place where the Lord Ruler sends those to death, but no one has ever escaped – until Kelsier. Because of how he got into that situation and what happened, Kelsier now holds a personal vendetta to kill the immortal Lord Ruler. Kelsier has quite an inflated ego, has a tendency to run his mouth, make light of serious situations, and be spontaneous. However, every time he is proved himself to be right and a genius. Personally, I loved Kelsier’s personality and attitude. I will be honest though, as the story when went on, and as we see how he treats nobles and what his past entails, I struggled with my sympathy him. Because of what happened, I feel horrible for the man, but what he does sometimes… I can’t help but wonder why it was necessary. Kelsier is an amazing characters.

The character who stole the show for me was Vin. Unlike Kelsier, Vin was sympathetic from the start and my love and attachment for her only grew as the story went. When we first meet her, she is hiding from other members of guild out of fear of being beaten again or an attempt at rape. She always beaten by her brother, who later abandoned her; was always told by him she was worthless and now believes it; and because of where she grew up, she trust no one. I don’t even want to say too much about her, but I loved the experience of witnessing her arc in the story. At one point in the story, in the crew, she had to dress up like noblewomen and go to a ball – it was her first time ever being in a dress or even being treated like a women!  Then her relationship with Elend Venture… not even going to lie, that tugging at my heart.

We are getting up there on the word-count so lets get to the magic. Allomancy is the best magic system I have ever read. Being able to use burn different types of metal is fantastic, but it stands out because of the detail Sanderson puts into. It basically like a science! The only time I could see readers getting bored in the story, is when – between these start and middle – we get a heavy lesson on the 101 of allomantic powers. I was eating that up though, and wanted more and more details.

The things about the magic-system explanations is it’s not some giant info dump. Sanderson’s a master storyteller, and he slowly weaves bits of the magic into the story, and then when he does he chuck on explaining, you are actually watching a training session, and right after that, he goes into a battle where we get to see it in use to its fullest.

The only thing I wish, is that was written as an adult novel. Im referring to the prose. Sanderson’s YA prose is great – Steelheart is the probably the best book I’ve read in 2015 – but the other novel I’ve read by him was Elantris and I loved his prose there.

What always stands out to me in a Sanderon novel is the amount of mystery in the story – and Mistborn is no exception to this. A matter a fact, it is probably the greatest example of this. There are layers of mystery throughout the story getting reveled and answers throughout that keep the reader engage.

All the characters are either sympathetic or compelling, incredible magic system with detail and explanation, and Sanderson’s storytelling should made breeze through novel like it was nothing.

Yep, it’s official: Sanderson is one of my favorite authors.