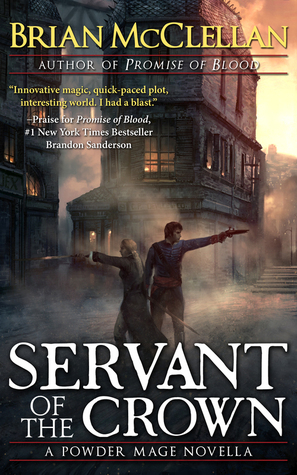 Servant of the Crown (Powder Mage #0.1) by Brian McClellan

These novellas in the Powder Mage trilogy are starting to become addicting!

Captain Tamas is an ambitious young officer in the Adran army. As a commoner, he is one of very few without noble blood to hold a rank. When he challenges the son of a duke over an insult, the subsequent duel lands him in hot water with the nobility and the royal cabal of Privileged sorcerers. Tamas is soon drawn into a conflict that goes to the very highest office in the land, and his only ally is the most unlikely of people; a young noblewoman named Erika, who needs Tamas to teach her how to wield her powers as a powder mage.

Servant of the Crown picks up essentially right after Forsworn (my review). This time, the story focuses on Tamas; his struggles being a commoner of birth trying to rise up the military ranks; getting his first real taste of the tensions between the royal cabal of the Privileged and the King; then, of course, the beginning of his relationship with Erika.

Being a commoner with a position in the military that is almost exclusively nobel, Tamas frequently finds himself in situations having to defend his honor which inevitably leads to him making a challenge – roughly a dozen in past 3 years. Today he is in a pistol duel with the arrogant, first son of a high ranking Duke. Tamas does not kill him – though he easily could have – but instead merely nicks him with the bullet causing more insult than injury.

Over a week later, Tamas is suddenly summoned to his General’s office to find out that he has been accused of recently cheating in a duel. This accusation results in his temporary suspension, revoke of his would-be promotion, and a potential permanent discharge. However, once he is summoned by the King, Tamas begins to think he may not have been accused the high ranking Nobel, and may actually be caught up in a fight between the royal cabal of Privileged and the King.

Then to make things worse for him, he is approached by a Kez female who is a Powder Mage herself, and wants Tamas to be her teacher.

While I enjoyed Forsworn, it was basically a fun story about a character who technically isn’t in Promise of Blood. It had the bit about the air-rifles and Duke Nikslaus did play a big role, but it still very much had the feel of short story to keep readers satisfied and in the world until the next book came out. (Nothing wrong with that! I wish more authors did what Brian does.) Servant of the Crown on the other hand, has a lot of substance and meaning in it.

The obvious thing that readers are going to love to see is Tamas. In Promise, we already see him as a Field Marshall, and only heard brief mentions and side stories about the struggles he faced trying to rise in the ranks. Here in Servant, we first meet Tamas when he is not yet even a Major and get to see firsthand how difficult somethings were for him being commoner of birth.

Seeing Tamas try to overcome the prejudices of his birth leads into a second piece of informations readers will enjoy: the beginning of the feud between the royal cabal Privileges and the King – who is Manhouch XI, the father of Machouch the XII from Promise – and the dislike Tamas has for the Privileged. Again, in Promise we start off will that feud already being well established, but here we are witnessing almost its beginnings – at least its beginning with Tamas being concerned.

The last bit that everyone will enjoy is – as it was foreshadowed at the end of Forsworn – we get to see Tamas and Erika together for the first time ❤ Thinking about the Tamas in Promise, that grey haired, grizzled, honor- and duty-driven, completely focused, and arrogant, war veteran… he is not at all that here. You can see here in this story where the foundation of everything was, and why he developed certain attitudes and characteristics – but seeing him interact with Erika just felt so out of character from the Tamas I know XD

Now, none of the information given in this book is needed to be know before reading Promise – it is all explained there – but it is always nice to see the origins of certain events, and get more background on main characters.

Although I didn’t go into it much in this review, the mystery behind who is accusing Tamas is suspenseful; the story didn’t feel slow at any point; and there is a couple great actions scene! This novella was in every way better that than the previous.

Side Note: Before you read this one, you really should read Forsworn first.

14 thoughts on “Book Review: Servant of the Crown (Powder Mage #0.2) by Brian McClellan”