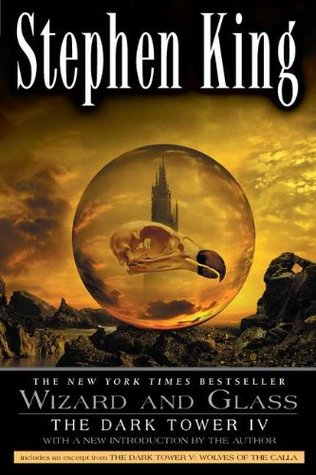 Wizard and Glass (The Dark Tower #4) by Stephen King

Wait, did we just got some ANSWERS!?

Roland and his band have narrowly escaped the city of Lud and boarded Blaine, a train that will take them to, of all places, Kansas, where the ghost city of Topeka has been depopulated by a superflu and where, alongside Interstate 70, an emerald palace rises enchantingly. Before Roland and the companions of his “ka-tet” continue along the Path of the Bean, Roland must tell his companions the tale that defines him both as a man and hero, a long-ago romance of witchery and evil, of the beautiful, unforgettable Susan Delgado, of the Big Coffin Hunters and Reah of the Coos. And when his tale is finished, Roland confronts a man who goes by many names, a man who “darkles and tincts” and who holds perhaps the key to the Dark Tower.

The stunning Plume edition features full-color illustrations by Dave McKean and is a collector’s item for years to come.

Another amazing installment in the Dark Tower series from King! The beginning took a bit to get into, and the ending was just plain bizarre, but the chunk of the book is a flashback to Roland’s first days as a gunslinger (which actually gives us some answers!) and it was hard to put down.

The Waste Lands ended in a pretty unfair spot – right as the riddling challenge was about to start! – but that is where this books starts off, with Roland and Jake going at it with BLAINE trying to stump him before time is too late. Once they are able to get off the train – whether or not it is because of a riddle, you will have to find out – they find themselves in… Kansas? Only this is neither a Kansas from Jake/Eddie/Susan’s or Roland’s (or Oy’s?); it is some other Kansas.

As they are approaching a large building off in the distance in other Kansas, Roland decides it is finally time to tell him story – at least, part of it. This story is about when he, Cuthbert, and Alain, first leave their father’s land, and when he first meets Susan.

If I had been reading these books when they came out in publications years, I would have pretty upset that King cut the story off in The Waste Lands where he did. I mean, I was really looking forward to what I was expecting to be a great showing of riddles! The riddles themselves did not disappoint, but how they beat BLAINE, well, that kind of did. For me, as soon this book started it was obvious what going to unfold. Despite me knowing what was going to happen, how the events unfolded in train were entertaining.

The meat of Wizard and Glass takes place during Roland’s flashback. And by meat, I mean about 500 of the almost 700 pages. Now me, I loved hearing this story. We learn SO MUCH about Roland, his friends – Cuthbert and Alain – who Susan was, how Roland met her. We FINALLY get some answer about why Roland is on a quest for the Dark Tower; get more information about his father and mother; we learn a little more about Marten and Walter. Most importantly, we get to know who Roland was and why he acts the way he does now. As I have been reading, I’ve been struggling to decided if Roland was good or bad, or wether or not Jake, Eddie, and Susannah could trust him, because we hadn’t found out what happened to Roland’s friends – Cuthbert, Alain, and Susan – before. After hearing Roland’s story, I think I’ve made up my mind and are pretty firm in it.

We all know that King has a tendency to thicken up his novels by just writing and writing and writing in places where it isn’t necessarily needed. I think this book is a perfect example. I did enjoy the pages of Roland’s flashback, but I definitely think he could chopped off a hundred pages somewhere in there. (I did read the expanded and revised editions (as are all four books I’ve read so far have been) so I don’t know how much he added from the original, or needed to add to help make sense).

The last part of book, to put it simply, is bizarre, strange, and out there. A lot things in these books so far have been fantastic, but King really reached to stars at the end here. I did enjoy it though, and the ending of the novel too. And if I had been reading these books as the came out originally, I would have been so pissed(!) to have to wait 12 years for the next one!

((Your know, there is probably some poor soul out there, who read this series, The Wheel of Time series, and is currently reading ASOIAF as each books are released, and have probably started The Stormlight Archives too… Whoever you are, I salute you for you bravery, courage and patience… patience most of all))

One thing I have been impressed with is how each novel’s individual story has been unique to one another. The Gunslinger was Roland roaming the desert; The Drawing of the Three was the doors and different worlds; The Waste Lands was split between Jake and the city in Roland’s word; and Wizard and Glass was a flashback to Roland’s story. Each novel’s isn’t simply a continuation of the story; the location, presentation and even the main genre of each story changes, and I find really helps me to keep me engaged.

6 thoughts on “Book Review: Wizard and Glass (The Dark Tower #4) by Stephen King”