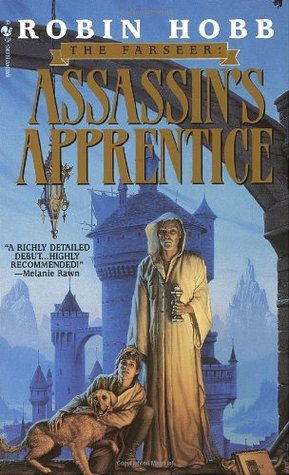 Young Fitz is the bastard son of the noble Prince Chivalry, raised in the shadow of the royal court by his father’s gruff stableman. He is treated as an outcast by all the royalty except the devious King Shrewd, who has him secretly tutored in the arts of the assassin. For in Fitz’s blood runs the magic Skill—and the darker knowledge of a child raised with the stable hounds and rejected by his family.

As barbarous raiders ravage the coasts, Fitz is growing to manhood. Soon he will face his first dangerous, soul-shattering mission. And though some regard him as a threat to the throne, he may just be the key to the survival of the kingdom.

I’m finding it difficult to write a review for this book. I absolutely loved Fitz’ character; his arc and development, and his almost coming-of-age tale. The Six Duchies was a great world, and I loved The Skill and the Red-Ship Raiders in the story. However, my biggest problem was that it always felt like we were skimming over certain details of events, and it was an more of an explanation setting up the next scene. Oddly enough though, I was never once bored reading, and to give this anything less than a 4 star, feels like I was be doing it injustice.

Fitz is the bastard son of Prince Chivalry, King-in-Waiting. At the young age of 6, Fitz’ grandfather drags him and his mother to a fortress to give the bastard back to Prince Chivalry – because the Prince has not acknowledged nor provided any coin to help care for the boy. No one has ever heard, or could imagine, that Chivalry would have a bastard child. The guard who receives the boy, brings him to Prince Verity, who is unable to deny the striking resembles and gives him off to Burrich, Chivalry’s stable-master, to take care of until it is decided what to do with him.

A bastard can be a dangerous thing – particularly with link of succession when the King-in-Wating has no other children. Fitz is eventually taken to the court and kept under the care of Burrich. Here, Fitz meets King Schrewd, and this is where the King offers to buy his allegiance. It is after that, that late in the night he gets a meeting from Chade, so that he may begin his assassin training.

When I think of assassins, I’m picturing some ninja-like skills and training, and maybe some action scenes like what we got in Brent Week’s Night Angle trilogy. Well, Fitz is extremely deadly when it comes to poising, and is apparently good at sneaking around in the dark – but there are no scenes of scaling the castle walls, sneaking into the foreign king’s room to slit his through, and nor are there any fancy sword duels.

Fitz does get trained by Chade to become an assassin, but when that does happen, we do not seem him learning to wield a sword or how to become an expert at potions. Instead, those details are mentioned is passing as a narrative recap of what we have missed, and instead focused on Fitz’ conversation with Chade.

This focus on the character and story – over certain details or focus of a particular moment – becomes a main way of Hobb’s story telling. Too be honest, I was a little sad to miss those training moments with Chade, and later on with Galen too. With Galen, we did receive a bit more detail than I was expecting – based on the story was being told – but it still only felt like we got a brief spark note of how things works, and that there was much more room to delve and stay focused on that one thing.

This may sound like a weak start to a 4 star book, but that is because you have not met Fitz. Normally, grazing over certain events and skimming on the details of some parts, would be a major deterrent for me, but taking time to explain them further, wouldn’t really have helped further Fitz’ character.

I loved Fitz. Incredibly empathetic, and like-able. Fitz starts off as a bastard who no one wants, and is forced to go live in the stables with horses and be taken care of by a man who he, Fitz, believes to have killed his dog – Fitz’ first friend. Life in court is hard being a bastard: people blame him for what happened to Prince Chivalry, and because of who he is, he will never be safe in life from enemies trying to assassinate him. His whole life, and through out this book, you can’t help be feel his pain, and want him to be happy. The only times when he seems happy, are when he was out with the local kids in town who have no idea who his identity it… they just call him “New Boy”. Those moments were my favorite – particularly the ones with Molly.

Fitz’ life is what this story about: about how he is trying to find his place in court as a bastard, and doing his part help Prince Verity and King Regal fight off the Red-Ship Raiders and protect the kingdom.

There are also two cool magic systems. The first is that Fitz had the ability to connect and share thoughts and experience with animals; there other is thing called the The Skill – which reminded me of telepathy. The Skill is explained – but it feels like it still has a lot more to it than Fitz had told us. Also, the talking to animals is really only grazed on the surface, and we have no idea what it can be capable of. This is not a fault on the story telling, but because of Burrich who does everything in his power to prevent Fitz from using it.

((This series was a major influence of George R.R. Martin and A Song of Ice and Fire, right? Those of you who have read the series/watched the show will why I am asking this question))

As I have said, it felt like many details were left out and skimmed over, but how things ended in the court and with Red-Ship Raiders and The Fool (who I am beyond intrigued about), I get the feeling that these were not expanded on because we are waiting for later in the story.

Saying that, I really felt Assassin’s Apprentice had that book 1, set-up and introduction. Don’t take that as negative though, that’s just what it felt like. Definitely going to start up book 2 soon, and if you looking for a character focused fantasy, I’d check this one out if I was you.