DJ: Hey Matt! Thanks for stopping by to do this interview! For readers who aren’t familiar with you, could you tell us a little about yourself?

Matt Hill: Hello! Very nice to be here. I’m a writer from Manchester, northwest England, where Graft and my first novel The Folded Man are set. I write what I’d probably call strange crime SF with a bit of body horror on the side. Right now I live down in London with my wife and baby son, and work as a copywriter by day. The fiction writing happens in all the gaps.

DJ: Graft is being described as “Under the Skin meets The Handmaid’s Tale meets The Fifth Element… with extra limbs.” The Fifth Element is one of my favorite movies of all time – so I got quite excited when I read that! What is Graft about?

MH: I have my agent and publisher to thank for the tagline – but it definitely sets the scene! Essentially, the book’s a near-future thriller about a mechanic called Sol who lives in a lawless near-future Manchester. He and his partner Pete steal old vehicles to break them down for donor parts – but everything goes deeply wrong when Pete jacks a luxury model and Sol discovers an amnesiac, three-armed woman called Y in the boot. Sol learns that Y has been augmented and trafficked across dimensions for reasons unknown, and together they go on the run – in part to try and solve the mystery of her identity, but mostly because the traffickers are a highly organised, vile bunch who want Y back.

MH: I think it’s got a bit of everything I love in there: dark thrillers, political machinations, X-Files-y conspiracies. Ghost in the Shell is an immediate (and probably quite obvious) touchpoint for me, and I guess it shares a certain sensibility with films like Shane Meadows’ Dead Man’s Shoes. But there are even some oblique references to video games – I think those interactive experiences often fire the imagination in interesting ways. Truthfully though, anything and everything goes in the pot when you’re writing a novel. Especially when the process takes a long time.

DJ: Could you briefly tell us a little about Y? Is this where The Fifth Element descriptions come in? Why will readers sympathize with her?

MH: Y’s the central character and focus of the novel. We first meet her in the facility where she’s had her memory and voice removed, and where her ‘makers’ have augmented her for a specific but mysterious role, and are now rigorously training her to use those augs. But they haven’t reckoned on her inner life. Because whatever they’ve done to her, she simply refuses to yield.

The comparison with The Fifth Element is solid – particularly when you look at Y’s relationship with Sol, and in their story arc. Like Dallas and Leeloo, Sol and Y have to become an unlikely duo to survive.

As for readers sympathising with Y’s character – I bloody hope so! She’s in an utterly horrendous situation, but stays both human and humane despite her traffickers’ attempts to purge those qualities. Like so many people in the book, Y is just seeking ways to get through desperate times. I guess the whole thing is a tribute to that spirit.

DJ: What was your favorite part about writing Graft? What do you think readers will be talking about most once they finish it?

MH: I think there was a lot of satisfaction in piecing together a novel from multiple characters’ viewpoints, and keeping the momentum up. But it took a lot of drafting for the pieces to fit. So maybe the first time someone read it and said they enjoyed it? That was a nice moment.

As for readers talking about it – even the thought of that is surreal at the moment. It’s been in my head too long. There’s a slightly odd (but tender) sex scene that might raise a few eyebrows. That’s the bit I’m dreading my mum reading, anyway.

DJ: When I read, I love to collect quotes – whether it’s because they’re funny, foodie, or have a personal meaning to me. Do you have any favorite quotes from Graft that you can share with us?

MH: Ha, I couldn’t possibly suggest any. But I will say that one of the characters, the Reverend – a repulsive man – has some pretty offensive moments. He has a line I doubt I’d ever be able to read out loud to an audience without giggling.

MH: Between edits and baby rearing, definitely not as much as I’d like. Thinking about it, probably the most remarkable thing I read in the last year was Cynan Jones’ The Dig, which is short, sharp novel about a farmer and a badger baiter. It’s like a punch in the brain. That and Sarah Hall’s collection The Beautiful Indifference, which is incredible.

DJ: Now that Graft is out, what is next for you?

MH: I’m trying to finish a new novel at the moment, so when Graft‘s launched and fully out of my head I’m hoping to get back to that. It’s a totally different thing, with a totally different approach, so I’m actually very excited to be writing it. Other than that, not a lot! Hopefully helping to make sure our son turns out to be a half-decent toddler…

MH: I’m on Twitter @matthewhill, and I post occasional bits of news and ramblings over at matthewhillswebsite.co.uk.

MH: My pleasure! Thanks very much for having me. 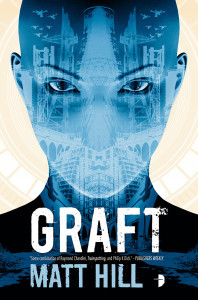 It’s Under the Skin meets The Handmaid’s Tale meets The Fifth Element… with extra limbs.

Hidden in the stolen car is a voiceless, three-armed woman called Y. She’s had her memory removed and undertaken a harrowing journey into a world she only vaguely recognises. And someone waiting in the UK expects her delivery at all costs.

Now Sol and Y are on the run from both Y’s traffickers and the organisation’s faithful products. With the help of a dangerous triggerman and Sol’s ex, they must uncover the true, terrifying extent of the trafficking operation, or it’s all over.

Not that there was much hope to start with.

A novel about the horror of exploitation and the weight of love, Graft imagines a country in which too many people are only worth what’s on their price tag.

Matt Hill was born in 1984 and grew up in Tameside, Greater Manchester. After completing a journalism degree at Cardiff University, he trained as a copywriter. He now lives and works in London.

His first novel, The Folded Man, was runner-up in the 2012 Dundee International Book Prize.

You can find Matt online at his website:matthewhillswebsite.co.uk, on Twitter @matthewhill.