The Patriot book was a gift from my aunt and uncle. They know I like reading (although, you should have seen the look other their face when I said I had read 77 books up to Christmas that year), and they know I like the Patriots, so they put one and one together and got me this.

Bigger Than the Game was a surprise gift from my father. I remember he had told me a few times over the year about this guy: Dirk was basically a long-time minor league player who after his career, turned to writing and start writing about his experience playing pro ball. For those of you that don’t know, I actually went to college to play baseball, but ended suffering a few back and shoulder injuries that set my career short. This is a book I plan on read before the summer hits. 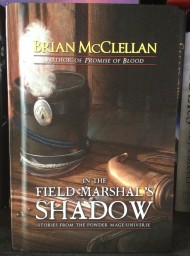 Moonwalking with Einstein and In the Field Marshal’s Shadow were from my mom and actually the only two books I actually asked for for Christmas. I asked for Moonwalking because, very soon, memorizing is going to become a valuable skill (I get around to making a post about that in the coming months); and Field Marshal stickily because I wanted to collect it.

Then the other book my mother gave me was the Stephen King short story collection. I don’t ask for book anymore because I have to many, but I’ll never turn down or be disappoint by a book as gift 🙂 Especially one that is a surprise – and a surprise that turn out to be Stephen Kind 😉

Almost forgot! Brian signed not just the book, but included a singed book plate as well! I still can’t believe I have finished the trilogy yet… or even started book 2!

As you may have noticed from the picture at the top of the post that included all of the books, there was this one GIANT and beautiful looking book at the very. As you can see the now, from the picture above, it is not actually a book (sorry to disappoint), but a box shaped like a book.

When I opened the book box, this was what I found inside:

Doctor Sleep by Stephen King… This is a great gift; as I have said many times, King is my favorite author – but when I open it and saw this book, I was confused… and when I said “thank you” it showed -and it showed with the look I gave my mother as I said it. Why the confusion? I already had this book.

If someone gave me a book I already had, I would NOT tell them I already owned it; I would act completely appreciative, grateful, and happy for the gift. The reason I acted this way (confused), was because my mom was the one who gave me that copy of Doctor Sleep a few years, and I know there is no way she would have forgot that. This led my mind to instantly think one thing. I look at her dead is the eyes and said, “YOU DIDN”T.” 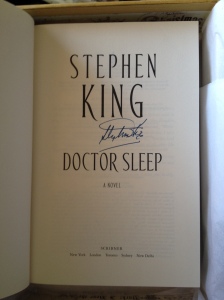 That is a signed copy of Doctor Sleep!!!!!

Now, I’m not saying I have best mom in the world, but she got a copy A Game of Thrones: The Graphic Novel signed by George. R.R. Martin for my birthday last year and then a copy of Doctor Sleep signed by Stephen King for christmas, so…. 😀

Read any of these books yet? Did you get any good books or book related gifts for the holidays?