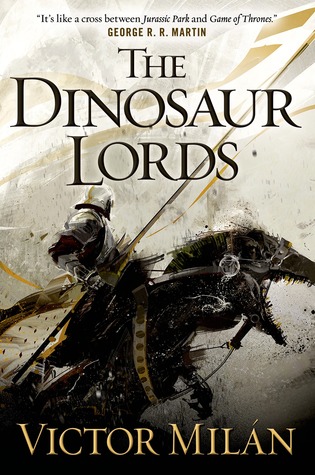 Well, at least it has dinosaurs?

A world made by the Eight Creators on which to play out their games of passion and power, Paradise is a sprawling, diverse, often brutal place. Men and women live on Paradise as do dogs, cats, ferrets, goats, and horses. But dinosaurs predominate: wildlife, monsters, beasts of burden – and of war. Colossal planteaters like Brachiosaurus; terrifying meateaters like Allosaurus and the most feared of all, Tyrannosaurus rex. Giant lizards swim warm seas. Birds (some with teeth) share the sky with flying reptiles that range in size from batsized insectivores to majestic and deadly Dragons.

Thus we are plunged into Victor Milán’s splendidly weird world of The Dinosaur Lords, a place that for all purposes mirrors 14th century Europe with its dynastic rivalries, religious wars, and byzantine politics…and the weapons of choice are dinosaurs. Where we have vast armies of dinosaur-mounted knights engaged in battle. And during the course of one of these epic battles, the enigmatic mercenary Dinosaur Lord Karyl Bogomirsky is defeated through betrayal and left for dead. He wakes, naked, wounded, partially amnesiac – and hunted. And embarks upon a journey that will shake his world.

This book has the blurb “It’s like a cross between Jurassic Park and Game of Thrones” on the cover. I completely agree with that blurb and believe it to be an accurate description on the story. However, the book was just…. uh, yeah – I tried people! I really tried to like this! 😦

The book follows two main plots, and as the story progresses, it branches out with some sides plots. The first plot follow Rob Korrigan, a dinosaur master, and Lord Karyl Bogomirsky, a mercenary Dinosaur Lord. At the start of the story, these men are on opposing sides – Rob having been hired by the Princes’ Party to train the dinosaurs which will be used to fight against Lord Karyl’s White River Legion, who have been hired by the Empire of Nuevaropa – when an unexpected turn of treachery strikes the battle field causing misfortune to fall upon Lord Karyl.

Later on, a mysterious women hires Rob to find Lord Karyl – which seems impossible, because he is supposed to be dead – yet, Rob does find him, and Lord Karyl confirms that he is not dead… but did die twice. The two return to the cloaked women who says they both need to go help train the people of The Garden to protect themselves.

The second plot follows activities going on with the Empire in the Firefly Palace. Here we meet Melodia, the daughter of the Emperor, and her soon to husband, Jamue Llobregat – a champion swords man, philosopher, and leader of the Order of the Compains – who we actually first met on the battle field with Lord Karyl.

At the court one day, a very unexpected visitor appears and becomes allies with Melodia’s father, the Emperor. This is something that unsettles both her and Jaume greatly, and, soon after, the Emperor decides to send of the army, lead by Jaume, to take care of some business.

This is where the plot breaks to follow Jamue on his crusade with the army, and Melodia with her doings and suspicions at the palace.

I want to start by saying there is a lot of things this books great: First would be the world-building. The culture, politics, different religions and philosophies, the nature/wildlife, how the people dress – I thought all that was great. At the start of each chapter – along with a sketch of a dinosaur – will be an entry from The Books of True Names explaining a little bit about a certain dinosaur, or it will be “A Primer To Paradise For The Improvement Of Young Mind”, which is a little background to the history of the religion of Paradise. As for the dinosaurs themselves, I felt they were incorporated perfectly into the story. It was not as basic as replacing a dino with horse ;if you were to take out the Dinosaurs, the whole plot falls apart – they are crucial to the story. I was also a fan of Victor’s prose, and he is up there on my list of authors with the best vocabulary.

Sadly, there are two items that should have stood out that I did not just mention: Character and plot. I had zero type of connection or empathy for any of the characters. I had no idea that all of our main protagonist, were actually our main protagonists until they kept having POV chapters! They all felt like side characters to me. I thought Karyl was just there for us to see the battle at the start, and the way Jamue is depicted – as the perfect white knight is shinning armer, every girl swooning over him – was going to be set up to die to develop another character or the plot. NOPE. With the exception Lord Karyl – who has died twice – there is nothing special or unique or interesting about any of the characters; they just weren’t memorable. I actually had to go back and look up all their names now for the review

The books is told with multiple POVs, as I have stated. Some people don’t like having a lot, but I’ve always loved it… as long as it is executed correctly. The chapters are already short to begin with – maybe 8 to 10 pages? – but each chapter is then split up into sections for multiple characters. So at times, we literally don’t even get a page’s worth of writing for a POV and end up with only a brief scene. And that what this books felt like: scenes; jumping from character to character, showing little scenes here and there, that make up the story and are supposed to develop our characters. It wasn’t so bad at the start and end of the book, but the middle chuck was a mess. Then fact that the plots didn’t even interest me from the beginning…

The only character’s POV I did enjoy was Melodia. Paradise is a very hot place, so people are very skimppy on the clothing, and most of the people do follow a belief in hedonism. Needless to say, her and fellow Princesses had many conversations and moments where all I could say was WOW. It all felt very over the top the way they acted, but it was entertaining and funny. Of course though, her scenes felt scarce to me (or maybe it was because I was bored by everything Rob and Karyl were doing… and even after the end of this book, I am still convinced that Jamue feels like a side character?).

Anyways… GRRM, the man himself, compared it to Game of Thrones, and it does have the feel with the multiple POVs, complex plot, and politics. After the prologues – which was great – and the opening battle, I thought this story was going to take off! But yeah… like I’ve been saying: nothing.

I kept trying to figure out what was wrong when I was reading, when I read another review, and they used the perfect word: FLAT. It’s so cruel to say, but yes, the book felt flat 😦

I wanted to like this books so incredibly much! I even tried putting it down 3 times and came back to it later because I thought I might have been in a funk. Victor has great prose, great world building, and did an amazing job at incorporating the dinosaurs – but it doesn’t matter how good the writing and world are, if I am bored and completely uninterested with the characters and story.

I strongly urge you to read other reviews out there. I don’t think was a bad book, and I know many people who thought this was a fun story; I don’t regret reading it, but seeing that all the pieces were there to make something that could have truly been a one-of-a-kind epic fantasy… it’s breaks my heart to not have enjoyed it 😦

4 thoughts on “Book Review: The Dinosaur Lords (The Dinosaurs Lords #1) by Victor Milan”