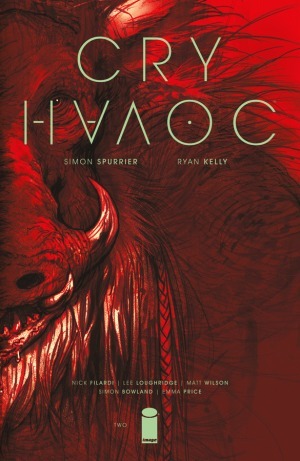 Óttar is my new favorite XD

Another solid issue, packed with some interesting plot developments. We learn what the different colored frames are used for, what Óttar’s strange habit it is, and I gained a new appreciation for the art style – because of a werewolf drawing. Also, no more monocle on this month’s issue XD

Instead of writing my own plot intoduciotn, I decided to copy what Simon Spurrier put in the front cover. (Why this isn’t the backcover synopsis for the book, I don’t know though). I chose to do this because yes, it makes my life a little easier, but it also shows how the these three separate plots are of the same time line.

Last review, I was calling the blue, yellow, and red, the “beginning”, “middle”, and “end” – well, that is exactly what Spurrier has told us, indirectly, he is doing. In the “end”, “The Red Place”, the rogue Odell, starts off the issue giving Lou a speech about how the human brain isn’t like a comptuer and can process a story a lot better in a beginning, middle, and end style. This relates to how the story is being is told, but Odell is giving it to Lou to explain their place, werewolves and creatures of the like, in relation to the present world.

In “middle”, Lou picks up the scent of Odell, and this leads them to a hut, where we get to see another solider, Óttar, in action, and hear what another soldier, Sri, is capable off. All I will say is, with Lou turning into a werewolf, she may be the most normal of the crew. (Speaking of “normal”, Óttar has a has a… medical condition…) XD XD

One thing I thought was weird in “middle”, is where it is supposed to be yellow, the frame borders are actually gray? I did read these pages over a couple of times. There is very weird thing that happens, but they are more moments that have stood out in the this issue, that didn’t change the plot-line to a gray frame… maybe if this comes up again, I’ll be able to figure out what the change is.

Then in London, “beginning”, Lou is trying to deal with becoming a werewolf – although it doesn’t appear that she knows yet. She has a run in with a man at a bar, and, I couldn’t tell if he had supernatural powers of not, but he different knew there was something special about Lou she seeks some answers from him.

Also, in London, there were two sketches of Lou as the werewolf, that I fell completely in love with! There werewolf is a base color of black, and Ryan Kelly use different shades of blue to highlight and accent the movement and detail of the fur – it’s cool, cold, and terrifying. If these were on the preview pages on-line, I would have added them, so check out pages 6 and 7 (page 7 my favorite).

Felt like there was a slight something missing from this issue, I believe it was how easily Lou opened up to this random guy at the bar after he made one comment, but the issue was packed with plot! Major shocker on the last page! Still thinking that dialog is amazing, and I am totally loving how the the story is being told in a beginning, middle, end. Each plot is drastically different from each other, in more than a few ways, and know that somehow, all three will be connected to make one, baffles and thrills me.