Book Review: Tails of the Apocalypse edited by Chris Pourteau 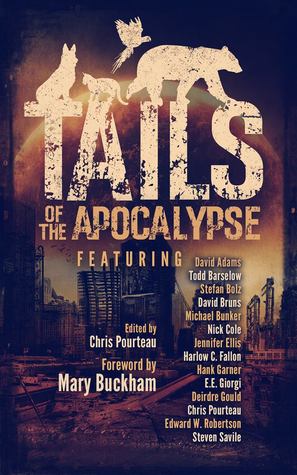 Tails of the Apocalypse edited by Chris Pourteau

These are the qualities of the heroic animals in this collection.

When the world ends, the humans who survive will learn an old lesson anew—that friendship with animals can make the difference between a lonely death among the debris and a life well lived, with hope for the future.

*Disclaimer: I received a free copy of this book from the editor in exchange for my honest opinion and review.

When You Open the Cages for Those Who Can’t (a Breakers short story) by Edward W. Robertson – 2.5/5 Rating

The Poetry of Santiago by Jennifer Elis – 4/5 Rating

Hell of a lot better than I was expecting!

The firs few stories were good (one a tad less than the others), but nothing more than average. However, once I hit the fourth story, The Poetry of Santiago by Jennifer Elis, the stories in the anthology all went up to another level, and I was pleasantly surprised by the quality of talent that I was reading.

This anthology is from an independent publisher, and the stories are composed of a lot of independent authors – however do not let the word, “independent”, scare you off. For me, with the exception of that one earlier on in teh book, each and every story here kept me invested the whole time. The plots – some of them simple and some of them with few good twists – are all captivating and pack an emotional punch (I mean, animals are in each story). Even though animals in danger is sad, I credit this emotion to the level of writing from the authors that Chris Pourteau was able to track down for this anthology.

As for the stories themselves – no two are same. There are stories ranging from cats and dogs, to parrots and bats; there is fantasy, science fiction, and horror stories; some are straight after a nuclear blast, some are after the zombies have taken over, others lead up to the end of days, while some take place in completely fictional worlds; we get stories from both the humans and the animals POVs; and in some stories animals are the focus, while in others it was a certain (human) character or the plot. There is an excellent variety is stories here, but the one thing they all had in common, was the potential to make the reader cry (you have been warned).

All in all, this was an extremely pleasant read, and I strongly recommend checking this out 🙂

One thought on “Book Review: Tails of the Apocalypse edited by Chris Pourteau”