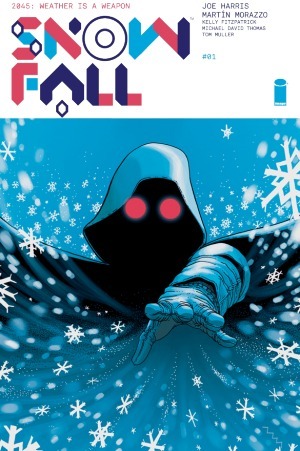 A world where snow and water, is money and power.

In the year 2045 it no longer snows following a crash that left the climate ravaged, society splintered and the newly-christened “Cooperative States of America” propped up and administered by the powerful Hazeltyne Corporation. Only one man wages an all-out weather war against the system, wielding the forces of nature themselves as weapons. He’s the White Wizard. The ghost in the night. Genius. Terrorist. Outlaw. Hero?

I’m torn. I think was this was good comic – there was some cool sci-fi stuff, I liked how the corporations have taken over the climate issues as another means to make money, and the plot keep me engaged the whole time! But, I’m not sure if this is my type of story.

Man has destroyed their climate. There no longer any naturally occurring snowfall, and the climate has been growing dyer and dyer since then. Fortunately, science developed a means of being able to control the climate and actually create snow. Unfortunately, corporations took what the scientist made, and made into a profit.

Ten years ago to the day was the last time snowfall was recorded. It was ten years ago to the day the White Wizard stopped the snow, so that the princess would wake up from her spell. Today, there was a massive snow storm in some Resettlements, except it wasn’t sanctioned by Hazelytne Corporations – and that means they lost money. And now the Corporation is out seeking to find who was responsible.

That would be so corporate America: find a way to fix the climate issue (that we made) and to exploit that solution to make more money for themselves. Harris aptly names this corporation the “Cooperative States of America”. The Cooperative is a part of the Hazeltyne Corporation in charge of bringing down criminals against the climate – aka. people who change the climate without their say and cause them to lose money XD

The story follows around the student, Anthony Farrow, at a Cooparative University for Climatological Research, who seems to believe that Hazelytne is a load of crap and is the bad guys. Anthony is constantly running around looking for directions to something in this issue.

In New Mercy, where that unplanned snow storm happened, Inspector Davitika Deal, is trying to figure what or who caused this storm to happen. She blames it on the White Wizard. When she tells the mayor this he laughs – but she is completely serious. She agrees it was the same child’s tale she grew up with, but Inspector Divitika also assure him, the White Wizard is real.

At the start of the comic, and in the middle, we have a few pages dedicated to this tale of the White Wizard, which basically says that a princess was put under a spell to sleep when it was so snowing, so to wake the princess up, and break her from her curse, the White Wizard stopped it from snowing. All tales comes from some sort of truth tough, right? 😉

I think the story has a pretty cool art style (absolutely digging the cover art), and Joe Harris is a boss storyteller. He packed a lot of worldbuilding, and background information into this issue without ever feeling like the story lost the pace. And the dialog was great! One of my biggest pet-peeves are comics where the dialog is limited to a few sentences, and then the comics flies by, and it feels shallow. Not here. We get full on conversations, with a good chuck of sentences, and at times, paragraphs. All this lead to greater world-building and individual character development.

Seems like a good review so far, so why am I torn about this? I’m not too big on climate-issue or political focused stories

This story could take a massive turn and end up being heaving into the science fiction with different gadgets and inventions (we get a brief, but good, look at one at the end of this issue), but it still fells like the plot may be circling around too much with certain characters trying to “stick it” to the government. Based off the first issue, I have no idea which direction the story is going in, but I do like this issue enough to find out.

I’m not going to be buying issue #2 (other new series coming out that will be taking up my comic budget), but when the Vol. 1, TPB comes out, you can be sure I’l be looking for some reviews to see how it turned it.

I like to think I’m humble enough to know a good story when I read it, and know the difference between a bad story and something I don’t like. Snowfall is a good story, just may not be my cup of tea.