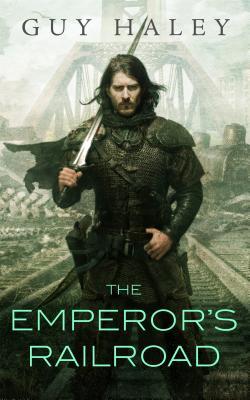 Fantastic history to this world.

Global war devastated the environment, a zombie-like plague wiped out much of humanity, and civilization as we once understood it came to a standstill. But that was a thousand years ago, and the world is now a very different place.

Conflict between city states is constant, superstition is rife, and machine relics, mutant creatures and resurrected prehistoric beasts trouble the land. Watching over all are the silent Dreaming Cities. Homes of the angels, bastion outposts of heaven on Earth. Or so the church claims. Very few go in, and nobody ever comes out.

*Disclaimer: I was provided with a review copy from the publisher in exchange for my honest opinion and review

Zombies, machines relics, prehistoric beasts, angels and heaven, and knights. These things may not seem like they would belong together, but for this story they do. Guy Haley has taken these seemingly unrelated items, and put them together to create a truly fantastic world and history.

Abney and his mother are leaving their home of New Karsville to join their cousin in Winfort. After the war, the angels set a plague of the unliving loose in Virginia, and that destroyed their home. On their way off, they are picked up by a mail-carrier to escort them – to help protect them on the road – but he soon suffers an accident which brings his death. Abney and his mother, now alone on the road, with a broken carriage, seem to be doomed to wait for either zombies or other humans to end their life. Lucky for them, their first wanderer is a knight from a Dreaming City. It is a steep price to pay for his services – half of Mrs. Collin’s bridal price she’d saved – but it is a price they must pay if they wish to survive the unliving, the road, and the other half of the Emperor’s Punishment: the dragon.

The story starts off fairly tense: we have a zombie attack right off the bat, with Quinn, the knight, coming in wielding two swords and a gun. After that, I was expecting an action-packed story for the whole ride, with knights and zombies. Sounds awesome right? Well, the action did lay back a little (up until the end, that is), but it turns out, the knights and zombies were only the tip of iceberg for this world.

Without a doubt, my favorite aspect of this story was the world-building and the backstory of how the world came to be as it is. At the start we have these zombies and knights – which made me think maybe a medieval setting? Then we hear about the “Gone Before” people, who created things such a concrete – which got me thinking some type of apocalyptic event happened. Okay, I’m with you so far, Mr. Haley. Then we learn of kingdoms… like, the kingdom of Pittsburg? And that there are angels… like, angels of Virginia? And that there are Dreaming Cities, where angels created knights, such as Quinn, to serve under them? And that there is also a dragon…? What is going on, and where are we?!

Turns out, that God was none to happy with what was going on down on Earth, so He took some things away (thus, the “Gone Before” people) and sent down angels to help rule. Eventually, the angels of Columbus and Pittsburg, started a war with each other, and enlisted the help of men. One of the kingdoms to help Pittsburg, was the Emperor of Virginia. In helping, the angels gave the emperor some technology from the Gone Before. The emperor did help them win the war with that technology, but he also used it for himself later on, and because of that, the angels unleashed what become known as the “Emperor’s Punishment”: a plaque of the unliving, and a dragon.

This backstory was slightly confusing at first for me, when the talk of angels and kingdoms of Pittsburg, and dragons, and Dreaming Cities… but eventually I was able to grasp what had happened and what was going on in the world now, and then all I wanted was to know more this world’s history!

The Emperor’s Railroad is told from Abney’s first-person account. While he is twelve-years old in the story, the narrator Abney is an old man, recollecting to us, his time with Quinn, the Dreaming City Knight. Being from Virgnia, Abney does have a southern-accent, so it present in Abney’s narration, and also the conversations of most character’s dialogs. Personally, I loved this. When I was reading, in my mind, it was the voice a southern man talking, and because this dialect felt so true and good to the south, I was not forcing myself to do that; the voice came naturally, and never once did I have issue reading Abney’s narrations because of it.

The only issue I had with this story, was that after that great opening scene, the story slowed down a little for me (we go back to them first leaving New Karsville and then catches back up to them at the start), and it was heavy on the narration side. Then, because of the focus on the narration, it took quite a while for the characters to develop and flush out. Abney, his mother, and Quinn, all only have a couple of lines each in dialog in the first scene, and there is nothing really unique – no idioms or anything like that – to make them stand out to me. For a while, it was “a boy” and “his mom”, with “a knight” on the road. I guess I shouldn’t say “boy” though. Abney is narrating, so you get a feel for him much quicker than the other two – but you understand what I’m getting at: there was nothing special to make any of their personalities feel like a character unique to this story. However, once we catch-up from the flash back (around 3 chapters in), our dialog among the three picks up and they all start to become their own.

I won’t get into too much about Quinn’s character, but he is a knight of a Dreaming City that made my jaw hit the ground when I found out which one it was; and when he found Abney and his mother, he was on a journey of his own, to find something that we do not know of yet…

Those few chapters at the start may not seem bad, but this novella is only 120 pages. And as much I LOVED learning the history, there was too much down time focused on world, and catching up on the character development after the slow-ish start. There are some great and tense moments throughout (there is quite an ending!), and once I hit about half way through, this novella was pure enjoyment to read!

I cannot wait for the The Ghoul King (Dreaming Cities #2) to be released in July! Quinn has a lot of mystery to him, and there is still much left to this world for us to hear about. And since we have a solid based on who Quinn’s character is now, I’m expecting to learn more of his secret quest, and what happened to the angels and all the Dreaming Cities and knights. There is one other thing I am super curious about with how Haley will handle it, but to bring it up – well, that is spoiler territory. But if Haley is going to do what I think he is planning on doing with the telling of Quinn’s journey, I think that is going to be pretty awesome.