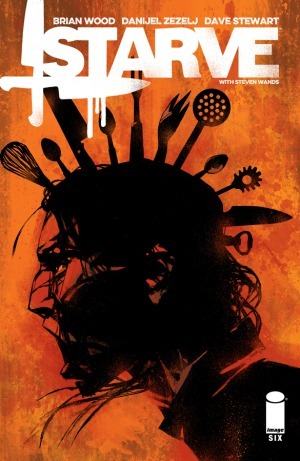 Gavin is back and he has a plan!

Critically-acclaimed STARVE is back for a second season!

Chef Gavin Cruikshank shifts his focus from the soundstage to the streets, addressing real world themes of food scarcity and class warfare.

Man, am I happy that Starve is back, and issue #6 (the first of the new story arc) did not disappoint! This issue was heavily focused on setting the stage for that new arc will be, and this new direction the story is taking has to do with Gavin’s new plan. I’d like to say that Gavin’s new plan is genius, but I have no idea what he is thinking!

Volume 1 ended off with Gavin getting stabbed in the chest by Greer. Obviously he lived and is okay – minus a couple stitches – but there are ramifications for Greer’s action.

At the end of last season, Roman decided that he is going to comeback to the show to face-off against Gavin again, and this issue starts off with them out at sea catching the crabs for that night’s contest. During the contest, while Gavin’s cooking exceptional food and confident he will win again, his mind is off somewhere else…. Greer’s trial for his attempted murder is about to begin.

Gavin also has a meeting with Dina, who is still trying to get him to leave the show and taker her up on her offer to open up a restaurant together. Gavin has not forgotten her offer, but he has a better idea instead…

From this issue, it seems like there are going to be three main plots for the new arc:

First: Greer’s ramifications of her stabbing and trying to kill Gavin. You know, I hate Greer. Despise her character. I feel sympathy for the women, with Gavin having left her before, and left her to raise Angie alone (even before he disappeared), but how she handled things afterward, her actions, and then finally stabbing him! I got nothing left for Greer. Yet, every time Gavin talks to her or thinks about her, suddenly that guilt and sadness and regret that Gavin feels, come though to me, and I feel bad for the women. I understand he feels bad about the past, but after trying to sabotage you on the show, and then stabbing you(!) – who cares about her anymore! But that just shows how flawed of a character Gavin is, and how depressed (in my opinion) he is.

Second: Angie and the Starve show. I don’t want to say much (you’ll see in the issue), but I have a feeling she is going to be playing a much bigger part in the competition, and that this will leak into Greer’s and, I’m assuming, Roman’s character to0.

Third: Gavin’s new plan with Dina. This is at the conclusion of the issue, but it was a major shock. If Gavin had decided to leave the show, and go open restaurant with Dina, and try to live a happy life from there, I wouldn’t have been too surprised. But the thing is, the reason Gavin went back to the Starve show was so he could bring it down, and teach the elite and rich 1% a lesson – so leaving the show would be him giving up. However, there is another way, and that would be: to empower the other 99%.

I am so psyched for the new arc of Starve! And I missed this art style so much! I forget what it’s called, although I almost positive someone told me in the comments before… so if you know what it is, please let me know!

Also, go out and pick up Starve Vol. 1, (#1-#5) if you haven’t already! Then you can catch up on the series, and read my reviews without fear of spoilers 🙂