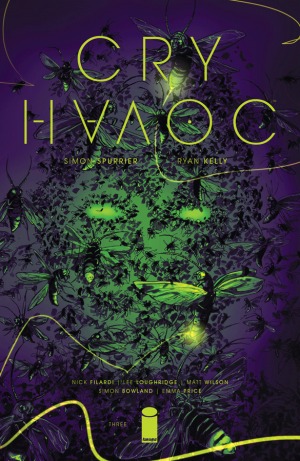 Things are getting interesting now! Lou is cleary a captive of Odell, but where she is and what Odell is up to, was a big surprise; we have a run in with, what I can only best describe as, the X-Files; and we meet some man-eating bugs in Afghanistan.

… In London Louise Canton was tormented by monstrous transformations

In The Red Place, I had been under the assumption that Odell captured Lou, when her task-force tried to get Odell, and that was why Odell had Lou captive and was preaching to her – trying to show her “the light”. As of right now, it seems like my capture theory was correct, but as to how much of a captive and why she was captured… well, I assumed she was locked in a cage, and I assumed she was some sort of bargaining chip, but both those were wrong.

Odell was still preaching to Lou how about she needs to see the world, but she does this while they are walking around their camp. That’s right. They are in a camp called “Newfolk”, and in this camp are a bunch of others that Odell refers to as “mythic”.

((I don’t believe I’ve mention it yet, but the in back of each issue there is an “Annotations” section, where Spurrier tells cool pieces of information about some pages of the comic. In this one, when we first see Newfolk, there are several “mythics” in the panels, and in the annotation he tell us what they all are and where they come from))

In Afghanistan Lou learns a very valuable lesson between good and evil, and how those two are really only relative to the situation they are in. She called the Taliban evil when she sees them throw a young girl’s father out of their hut and stomp on their flowers, but then Adze says that they are stomping on heroin and that they hate heroine more than anyone…. so are they truly chaotic? This lesson goes on to Sri’s character a bit too, when her and Lou have a conversation. (And make sure you pay attention to Ottar in background) XD

And in London, Lou is starting to shape-shift A LOT more, and is having more troubles controlling it (another sick drawing of the werewolf on page 9!); it is starting to have a major effect on her relationship with her girlfriend;  and when Lou is on the phone with a self-help line, she gets a meeting from a certain group of people (X-files), and it seems we may start to learn how Lou ended up in Afghanistan.

I’m on my way to comic shop to pick up issue #4 after I finish up this review. There are some other series I should catch up on, that I’m a few issue back on, but with how this issue ended (and the talk of a God) 😉 I cannot wait.