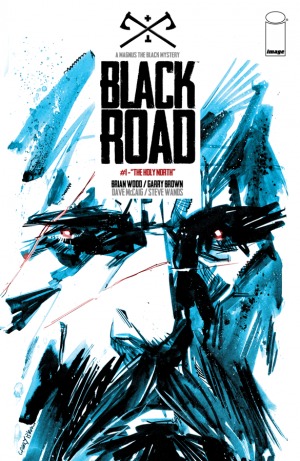 Been waiting 2 years for this… and I’m a bit underwhelmed.

Meet Magnus the Black, neither clean nor sober, neither Christian nor Pagan, but a man true to his word. When a ranking official under his care is brutally murdered, he’s prepared to hunt the killers to the frozen tip of Norway, religious war be damned.

I first heard about Black Road, back in end of 2014, for Image Comic’s Comic Solicitation for 2015 – its release date was set for November 2015. Yet, here I am in April of 2016(!) reading the first issue! Almost 2 whole years after I first heard of it! Next to I Hate Fairyland, this was the series I was most excited to check out in 2015. So, when I saw it finally had a set release date, I marked that on my calendar. I don’t know what caused the delay – I’ll have to look that up – but maybe it could used some more time. I’m a bit underwhelmed.

It is the time of the Conversion. The Christians have moved their way up to Norskk. Churches are rising everywhere, and so are the taxes; The Christians are changing Norskk with both words and iron and with blood. There is one man, Magnus, who has recently lost his wife, who has yet to decided which side he is on, but when he is payed money to take a Cardinal across the Black Road, his decision may become easier to make.

I think this is a internist set-up for a story: Christians invading Norskk, trying to spread their religion, and in doing so, turn up incredible amounts of violence and blood; and there is one Norskk, Magnus, who lost his wife, and now is deciding if he should join and fight for them because of the afterlife potential for his wife. I picture Magnus going off on some type of quest, killing tons of people, and constantly under the pressure of the deciding wether to leave his religion for one that has an after life, but that has also caused an incredible amount of pain and trouble for his homeland. It would seem like joining the Christians, in this story, would be like joining the bad guys. But if he doesn’t, then he will never get a chance to see his wife again.

Now that could still the be the main plot of the series, and based off of the first issue, it seems like I’ve hit the nail right on the head – but I think that my idea of what the plot outline could be is more… solid(?) than how it is presented in the story.

Issue one started off great, with a prologue page of a sailor’s story of how he dropped off a bunch of Christian priests at their massive temple on Norskk, and then watched them destroy his ships. Then we meet Magnus (a MASSIVE viking) burying his dead wife and then going into explaining how the Christians have affect his home.

Great set up to the story and great world building in the first few pages. Just from those first few pages, you already get an idea that Christians will not be the good guys in this story; that they have essentially destroyed the old ways of the Norskkfolk. A solid start. Where it is not solid, is in how the story is told: it was like reading a series of flashes or moments.

After the bar scene at the start, we go to “A Bit Later” for a page, where Magnus gets his weapons. Next page is “Early Morning” where he meets the Cardinal. Then fours pages later it is “Early”, and before the end of the issue, we go to “In Time.” The storytelling did not feel cohesive. Each section is clearly a continuation of another, but it feels like something was left out in-between each section; something connecting how he got from A to B. It was like a lot, BOOM, BOOM, BOOM; new scene, no intermission.

This comics actually needs some fluff. Everything is right-to-the-point (scenic jumping and conversations too), and because of that, even though Wood has done a great job at the world-building, character’s, and interesting plot, this jumping from point to point, is taking away from that, and making it seem like a short and shallower comic, that it actually is.

As I reflection on it now, this whole issue was setting up the world and the plot. The conversation were direct, and what they talked about, all related to how things in Norskk are now with Christians.

I do like Magnus’s character though! A giant of a man, with mountains of muscle to match. He is the loner; the quiet and strong type (we first him sitting alone at a bar table and wanting it to stay that way). Clearly he hates the Christian’s because what they have done to his home and people, but because of the change of seeing his wife again, he torn about what he should do.

While I did like this issue, after I finished it, I was leaning toward waiting for the trade paperback, but I don’t know… it ended with something where it I want to believe we are going to focus on the plot now, but I’m not sure if I want to take a chance. Yeah, this will be another one where I’ll wait to see if it’s worth it.