Today I am interviewing Bob Freeman, author of the horror, dark fantasy novel Keepers of the Dead, second book of the Cairnwood Manor series.

DJ: Hey Bob! Thanks for stopping by to do this interview! For readers who aren’t familiar with you, could you tell us a little about yourself?

Bob Freeman: Thanks for having me. My name is Bob Freeman and I hang my shingle as an author, artist, and paranormal adventurer who’s been a lifelong student of mythology, folklore, magic, and religion.

Keepers of the Dead is my second novel published by Seventh Star Press (the first being Shadows Over Somerset). I’ve written all sorts of short stories, articles, and reviews both online and in print since 2001 or there abouts.

I’ve been honored to do cover work for a number of authors such as William Meikle, Michael West, Steven Shrewsbury, and Greg Mitchell, to name a few, and I’ve done a lot of graphic design for various companies over the years.

I’ve also been known to present lectures on the occult and paranormal phenomena, particularly in the Midwest. I’ve been involved with paranormal investigations since the mid-1980s

I live in rural Indiana with my wife Kim and son Connor. I enjoy swordplay, roleplaying games, and rummage sales, and, obviously, am a voracious reader.

DJ: What is Keepers of the Dead about?

BF: Well, the backcover copy warns of a sinister cabal that “converges to unleash the ultimate evil against an unsuspecting world” and that “only the combined strength of the Wolves of Cairnwood Manor and the Circle of Nine Skulls offers up a glimmer of hope as werewolves, vampires, witches, immortal warriors, and an army of the undead collide in a battle of epic bloodshed.”

I think that’s a fair summation.

DJ: Could you briefly tell us a little about Michael Cairnwood? Does he have any cool quirks or habits, or any reason why readers with sympathize with him?

BF: Michael’s a thoughtful guy, but tough as nails when cornered. His mother bore him far away from his ancestral home, hoping to break the Cairnwood curse. He spent more than thirty years on the west coast, becoming a noted professor of anthropology, then, after the death of his mother, the Cairnwoods found him and brought him back home. Once he turned and became the alpha of the Cairnwood Pack he brought those skills as an anthropologist to bear, restructuring the hierarchy of his werewolf clan.

DJ: What is the world of the Cairnwood Manor series like?

BF: It’s the world right outside your window, only there’s a secret world, in the shadows, few people are aware of.

DJ: What were some of your influences for the Cairnwood Manor series?

BF: Dan Curtis was a huge influence on Cairnwood Manor. His productions of Dark Shadows, Burnt Offerings, Kolchak the Night Stalker, Dracula, Trilogy of Terror, Scream of the Wolf, and The Norliss Tapes were burned into my brain as a kid.

DJ: What was your favorite part about writing the Keepers of the Dead? What do you think readers will be talking about most once they finish it?

BF: I love becoming immersed in a novel, loosing myself in that world. When I was writing Keepers, I would work on it from 10pm-2am every night while the rest of the house was asleep. I was only sleeping anywhere from 3 to 4 hours a night, sacrificing sleep to work on the novel. I bled for it and I’d like to think that shows.

As for what the readers will be talking about, that’s hard to say. The cliffhanger is pretty dramatic, the events of Rosslyn Chapel really stand-out, particularly the blood rite, and every scene Townsend in is memorable to me.

DJ: What is your goal when you began writing the Cairnwood Manor series? The series is not complete yet, but is there a particular message or meaning you are hoping to get across to readers when the story is finally told?

BF: At its heart, I think it is about family, but not just those with whom you share blood, but those you choose.

DJ: When I read, I love to collect quotes – whether it be because they’re funny, foodie, or have a personal meaning to me. Do you have any favorite quotes from Keepers of the Dead that you can share with us?

BF: “In Fidelis, with blood sealed, Baphomet, Goddess, Queen. Awaken not in hunger, but fulfilled… enriched by our sacrifice… from our blood, your sustenance sublime,” Kilgour called as he drained the lifeless heart of its worth. Inari moaned in ecstasy and Underwood howled his approval.

“We are your humble servants,” Kilgour continued. “Rise once more, Devourer of Worlds. You who give life and take life the same.”

“Mother of Abominations! Hear me,” Underwood called out, struggling to hold back the rising tide of carnal expulsion. “Our sacrifice is one of blood!”

“Blood shall have blood!” Inari screamed.

“Blood is life!” Underwood and Verkaik cried out in unison.

DJ:Have you been reading anything good lately?

BF: I’ve been reading my way through Joe Lansdale’s Hap and Leonard series.

DJ: Now that Keepers of the Dead is out, what is next for you?

BF: Seventh Star Press will be releasing First Born, an occult detective collection that will serve as a prequel to my novel Descendant. 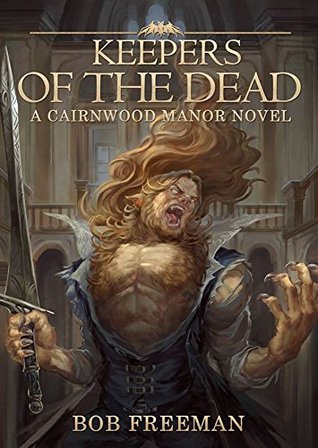 “Foolish pup,” MacGregor chided the werewolf, “you don’t get it. Laddie, if water were evil I’d be but a drop. What lurks below is an ocean.”

From the haunted halls of Cairnwood Manor to the bowels of Rosslyn Chapel, Bob Freeman hurls you into the very heart of the eternal conflict between the forces of darkness and the forces of light.

It’s fang versus claw, spell versus steel, and love versus death in an epic battle of blood and thunder.

When a sinister cabal converges to unleash the ultimate evil against an unsuspecting world, only the combined strength of the Wolves of Cairnwood Manor and the Circle of Nine Skulls offers up a glimmer of hope as werewolves, vampires, witches, immortal warriors, and an army of the undead collide in a battle of epic bloodshed.

Bob Freeman is an author, artist, and respected lecturer on the occult and paranormal phenomena. A lifelong student of mythology, folklore, magick, and religion, Mr. Freeman makes his home in rural Indiana with his wife Kim and son Connor.
.