DAVID WAID is the author of the historical fantasy novel, The Conjurers, which releases through Amazon on June 1, 2016. He has also published the fantasy short stories, Wicked and Loving Lies and The Festival of Rogues. David lives in Arizona with his wife of 22 years, three kids, and a craven, food-obsessed puggle whose name means “Battle Lord” in Gaelic.

Roo in a Sewe: Medieval Food

My historical fantasy novel, The Conjurers, is set in the 14th century and, for it, I did some research on medieval food. It seems—no surprise—that peasant fare was coarse stuff with little meat and even less variation.

On the other hand, there are many surviving medieval cookbooks that show at least some people were living the gastronomical Mardi Gras. And they ate strange things. Of course, the entrails of almost every animal were on the menu. These were known as Nombuls.

The fact that, among birds, we eat chicken, turkey and duck these days seems shabby and limited. And really, how many people eat duck, other than in Chinese restaurants or in godforsaken Turducken?

In bygone times, everything with wings was on the list. One medieval cookbook includes dishes for swans, ducks, cranes, geese, herons, peacocks, woodcock, snipe, curlews, blackbird, skylark, cormorant (with bill roasted open for elegance), and pigeons.

And about that Turducken…

Even as late as 1807, people enjoyed tasting the full array of our avian brethren. A cookbook from that year contains a recipe for “Roast without Equal,” comprised of a bustard, stuffed with a turkey, a goose, a pheasant, a chicken, a duck, a guinea fowl, a teal, a woodcock, a partridge, a plover, a lapwing, a quail, a thrush, a lark, an ortolan bunting, and a garden warbler. Some of these are creatures only the most geeked-out birdwatcher even knows exist. And if you follow the Turducken form of nomenclature, this dish would be a Buturgoophechiduckguifotewoparplolapquathrularortbubbler.

One of my favorite recipe titles, “Roo in a Sewe,” comes from the Liber Cure Cocorum, penned around 1430. This is not, as I’d hoped, a recipe for Pooh’s friend, but Old English for “deer in broth.”

The lure of the lamprey. Nom Nom Nom.

Lamprey was also widely enjoyed among the rich throughout Europe. Personally, I don’t see the allure of the lancet-mawed, ichor-sucking lamprey. It has to be one of the least appealing of all the slippery creatures sidling through the cold dark places of the earth. In fact, I strongly suspect they are distant cousins of the Great Nameless Ones that H.P. Lovecraft wrote about.

For a yesteryear fan-boy like me, one of the crowning joys of writing historical fantasy is the research that’s necessary. Food, clothing, ships, medicine and magic of the 14th Century were among the many things I researched in my effort to create a dark and convincing atmosphere for The Conjurers.

Naturally, on the internet, one link leads to another. Pull any historical thread and you may find yourself following a twisting line into oblivion. Don’t worry; you’ll emerge from the dream state a couple hours later. For writers like me, that can be a dangerous distraction. For readers like me, it can be riveting entertainment. 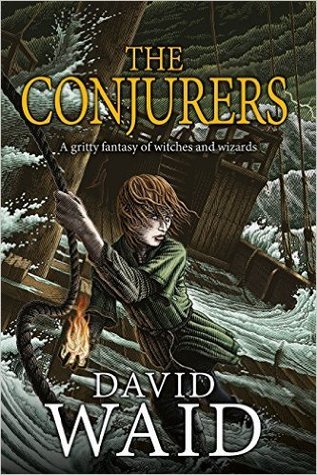 9 thoughts on “Guest Post: Roo in a Sewe: Medieval Food by David Waid”