Today I am interviewing Kelley Grant, author of the fantasy novel, The World Weavers, third book and final book of the Desert Rising series.

DJ: Hey Kelley! Thanks for stopping by to do this interview!

Kelley Grant: Thanks for having me! I’ve written the Desert Rising Trilogy and two unpublished novels. I also teach yoga and meditation. I grew up in the hills around Amish country and am most comfortable out in nature – hiking, gardening or meditating by our little creek. I’m owned by five cats and a dog.

DJ: What is The World Weavers about? What can readers of the series expect in the latest installment? Anything new? Any surprises?

KG: World Weavers starts with war beginning between the two Territories. Sulis and Kadar learn what sacrifices they must make to weave the world back to wholeness before the angry deities destroy everything they love. There are several familiar characters who now get viewpoints in World Weavers. Kadar grows into his powers in this novel, rather than being eclipsed by his more outgoing twin. Sadly, it is war and some of the characters don’t make it to the end.

DJ: What was your favorite part about writing the The World Weavers?

KG: I loved bringing all the various viewpoints together to one final concluding battle. A new character, the character of Abram, ended up one of my favorite parts of the novel because of his wit and his personality.

KG: As the four capricious deities of Desert Rising attempt to overthrow their creator, southern twins Sulis and Kadar step into the maelstrom with heretical ideas that tear at the fabric of life in the Northern Territory. In Desert Rising, Sulis and her great temple cat Djinn create chaos and rebellion in the Temple system as Kadar finds forbidden love. In The Obsidian Temple, Kadar helps destroy the caste system used in the Northern Territories as Sulis discovers ancient secrets. In The World Weavers they must weave all the chaos together to create a new world, a place where all creatures can live in peace; or their world will be destroyed. If you love crazy gods, large cats and epic new worlds, this series is for you.

DJ: What were some of your influences for the Desert Rising series?

KG: I love the too-human, flawed gods and goddesses of Greek mythology and used them as a pattern for my deities. I’ve always wanted a familiar and I think Djinn and the feli come from that desire.

DJ: Could you briefly tell us a little about Sulis and Kadar? Do they have any cool quirks or habits, or any reason why readers with sympathize with them?

KG: Sulis started out as the villain of my novel. I wrote five chapters and realized I despised my MC and was fascinated by this troublemaking desert girl. So I let her speak and discovered her twin, Kadar, and her powerful grandmother and family. Sulis has an affinity with the great cats who prowl around the territories. She can be terribly stubborn, just like them. Kadar, her twin, has an affinity with larger beasts like horses and camels. He is passionate and determined.

DJ: What is the world of the Desert Rising series like?

KG: The world was created by the One being. The One created all creatures, including the One’s favorite companions, the great felines called the feli. The One found humans troublesome and created the four deities to rule them. But the deities rebelled against the One, forcing their creator battle them and control them through the feli. During that battle, 500 years before Desert Rising begins, the Southern Territory was drained of life and is mostly mountainous desert region with rainforest on the coast. The Northern Territory climate is similar to that of the American Midwest, with a central mountain region. The darker skinned Southerners are more matriarchal and worship the One directly. The fair skinned Northerners have a rigid Temple and caste system directed by the four deities. The two Territories have a strained relationship at the beginning of the series, which leads to war by the third.

DJ: When I read, I love to collect quotes – whether it be because they’re funny, foodie, or have a personal meaning to me. Do you have any favorite quotes The World Weavers that you can share with us?

KG: Actually, my favorite quote of the series comes in the Obsidian Temple. Grandmother advises Sulis when she is feeling sorry for herself:

“How you find your path forward from pain and disappointment is a choice, not an inevitability. Living life without hesitation after failure is a choice. Loving after betrayal is a choice. Forgiving, even forgiving yourself, is a choice. It’s not an easy choice; no life changes are. A choice, nonetheless.”

DJ: Now that The World Weavers is released, what is next for you?

KG:  I am working on a new series set in the jungles of a new world of a Mayan-like civilization and revising a comedic fantasy novel.

KG: This was fun! Thanks so much for having me on your blog.

*** The World Weavers is published by Harper Voyager Impulse and is available TODAY!!! *** 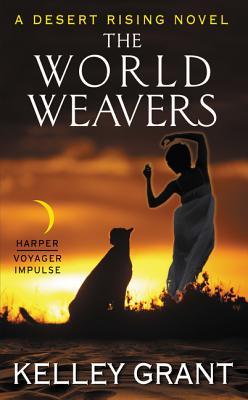 It has been a year since Sulis Hasifel fled to the desert, narrowly escaping death at the hands of a vengeful god. The time of the final battle, the final confrontation with the deities of her world, is nearing. Lured by the call of their long-trapped powers, the deities will descend upon the Obsidian Temple, where the Chosen await.

But the war between gods and humans has enveloped the entire land. Sulis s twin, Kadar, joins forces with the nomadic warrior tribes of the desert. Little by little, the desert armies draw the deities away from their stronghold in the north, towards their doom.

In the face of a battle that will reshape mankind s destiny and the face of the earth itself, old friendships will be tested and new alliances forged. In this spellbinding denouement to Desert Rising and The Obsidian Temple, Kelley Grant brings her epic trilogy to a thunderous and powerful conclusion.

Kelley Grant grew up in the hills of Ohio’s Amish country. Her best friends were the books she read, stories she created and the woods and fields that inspired her. She and her husband are owned by five cats, a dog and numerous uninvited critters. Besides writing, Kelley teaches yoga and meditation, sings kirtan with her husband, and designs brochures and media.