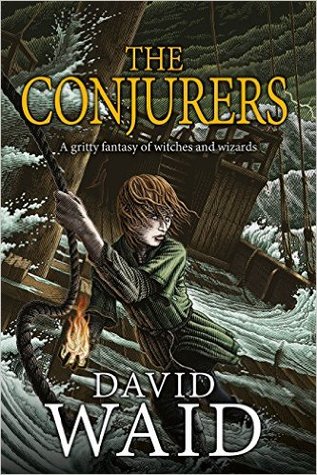 *Discalimer: I received a free copy of this book from the author, in exchange for my honest opinion and review.

It’s a very rare thing for me to accept review request from indie authors, however, The Conjurers was one of the books I made an exception for. David’s email to me was very professional, and his novel sounded interesting. I requested a preview chapter; liked what I read; so I agreed to give the whole novel a read and review. While the novel was not as good as those two preview chapters I read were (I’ll explain why later in there review), The Conjurers was still a very enjoyable read with a plot that has great potential.

Brigands are attacking Eamon’s village and forcing himself, his sister, mom, and step-father, to flee before they arrive. They are given a warning of this by their priest, Father Rhys, and told that they must go. As they are fleeing in Leinster, their wagon is attacked by a pack of wolves, and causes them to crash. While confronting the wolves, Eamon has a strange… surreal… moment that he does not understand, but if it was not for the help of a mother, son, and their dogs, from a cottage nearby in the woods, Eamon’s whole family would have died. The women who lives in this cottage, understands what that moment was that Eamon felt, and may provide clues as to why the brigands attacked, and what they were looking for.

Meanwhile in Genoa, Teresa’s brother, Ignacio, goes missing one night after he visits Maestro Lodovicetti’s house. Teresa gets a grave feeling that her brother is in danger, and goes to seek him out. While searching, she finds Lodovicetti’s henchman, dumping a bag into a sewer, and when Teresa open it, she finds a dead body (though not her brother’s). Unfortunately, the henchman knew she was there. She barely escapes and is able to get home to let her father know what she believes has happened to Ignacio. While her father goes to deal with what she has told him, Teresa goes to Ignacio’s room, where she meets Ignacio’s ghost and is told where she must go, and what she must do.

The two preview chapters the David sent me, I believe showcased what his best talents are as a writer: his narration, descriptions, and movement of plot. His narrative style reminded me very much of classic fantasy in that they storytelling is heavily skewed toward narration over dialog to tell the story. The narration he provided is not dull. David does not overly describe scenes or characters, and nor is his prose trying to be fancy and flowery. It was good fantasy writing. One of the preview chapters he sent me was with one of our villains as she riding into a town on a horseback, and it was from the opening paragraph of that chapter – how he described the scene, the imagery, and how the character was feeling – was what actually made me decide to give this a read. And in that chapter, the other preview chapter he sent, and every chapter he sent me, the plot was always moving forward. The problems I had are rooted in when you starting putting them all together in a row.

While many chapters taken alone are great, when read sequentially, I started to feel the lack of “flow” in the storytelling, and what like holes in the story.

The story is mainly told from Eamon’s and Teresa’s POVs, with a couple of our villains getting chapters here and there to explain the whole scope of the story. Jumping from POV to POV was not an issue at all; it was the continuing of each character’s plot line. If we ended a chapter with Eamon at an inn, and then when we came back to him, and picked it up where we left off, I was comfortable reading. Sometimes though, we’d leave off with Teresa in her house, and then she is out running around the streets, and that is when I felt like I was missing something. Obviously it doesn’t need to be an exact continuation from a character’s chapter to chapter, but when Waid jump to different scenes… that’s what is exactly what it felt like: different scenes; not a continuous, whole story.

As great as I liked Waid’s narration, it was for his descriptions, and telling of the story in that particular chapter. What the narration doesn’t do is tell me (give me a summary) of  what I missed from last chapter that lead up to where we are in a new scene. And neither do the characters themselves nor their dialog help to fill in the gaps.

You’ll have notice that I said Waid’s writing is heavily narration over dialog, and that I liked his narration very much – but I said nothing about his dialogs. That is because I felt those needed work. There were not many “conversations” between characters in the story.  It was each character saying a couple sentences or two, but no full-on paragraphs, or talks at great length. And I believe that really hurt the character development. The character felt generic by no means, yet, they felt nothing special; I had no attachment to them.

These feelings of gaps/holes in the story, that lack continuous, smooth storytelling, and not enough of dialog (or effective dialog), did hurt the novel. Which is regrettable, because this has an awesome plot. It is a true epic fantasy plot. Multiple threads, with twist and turns and suprizes! And magic, and demons, and wizards! But the lack character building left me wondering at character’s motivations and moves, and these “holes” in the storytelling really did bother me, and made it feel like I was missing some pieces to whole puzzle. This was a particular issue to me when it came to the explanations magic and demonic beings. We are always going forward, and even with all the narration, we never really get settled in to how things works or are provided with many possibly theories.

This novel is not without a couple faults, but I do not regret reading this at all. The plot is something of what could be made into a great epic fantasy series, and if Waid can manage to make reading the whole novel, feel like it does to read a single chapter alone, then I believe David Waid could become a fairly popular name is world of fantasy literature.

10 thoughts on “Book Review: The Conjurers by David Waid”