Today I am interviewing Michael R. Miller, author of the debut epic fantasy novel, The Dragon’s Blade: The Reborn King, and current contestant in the Self-Published Fantasy Blog-Off 2016.

DJ: Hey Michael! Thanks for stopping by to do this interview!

Michael R. Miller: Hi DJ, thanks for having me. I’m a fairly young author, 23, Scottish and living in London. Trying my best to get this writing gig off the ground. This book for me was THE story I had in my head. I think many readers know what I’m talking about. That story that’s been bubbling away for years and won’t leave you alone.

DJ: What is The Dragon’s Blade: The Reborn King about?

MRM: It’s primarily about Darnuir, a sixty year old dragon prince who is reborn and raised by humans instead. It is an epic and there’s lots going on but the first book is his story first and foremost. I wanted to start by focusing closer on one character before widening things out in the next books.

DJ: What were some of your influences for the The Dragon’s Blade: The Reborn King?

MRM: In terms of Darnuir and the whole rebirth thing there have been two major influences. The first was the old rpg game called Star Wars: Knights of the Old Republic (Kotor) in which you play as a character who has had his memories wiped and is essentially starting from fresh. There is then that awesome plot twist about your character’s past which I won’t ruin for anyone who hasn’t yet played it. Suffice to say I loved that game and I think I wanted to put my own spin on it.

The second was a philosophy question brought up in a basic first year module at university along the lines of ‘what would happen if you took person X and transferred their memories into person Y?’ It was a question without an answer. Something that could only be explored in fiction. And I reckoned it would be a great extra layer to Darnuir.

DJ: From a couple of the reviews I’ve read for your book, your world building seems to be very impressive. What is the world of the The Dragon’s Blade: The Reborn King like?

MRM: I’ve been very pleased with the praise for the world building as it seems to be something a lot of reviewers have enjoyed. The world is called Tenalp and yes, there are ten important mountains. They are the funnels by which much of the magic (Cascade energy) comes to the surface. The Cascade affects nearly all life in Tenalp. Plants might thrive on it turning silver and producing high energy foods while others wither and burn. The species are much the same: fairies can handle it better than dragons, for instance. I tried hard to integrate the magic of the world right from the ground up, affecting not just the geography and the species of the world but the societies and cultures as well.

Many other aspects are fantasy elements we know and love but with a twist. Dragons in this world are in human form. They are faster, stronger, live for longer, but look just like humans. They might as well be a race of Captain Americas. They have an old religion which has set them on the war path more than once against humanity. Naturally this has brewed some past grievances and tensions between dragons and humans yet they are having to try and put that aside to face this new overwhelming demon threat.

I also hope that my mythology and history of the world feels suitably mysterious. So often in stories we are told things about the past or the back story and we are to assume it is one hundred percent accurate. Yet that’s not strictly the case. Every historian has their own angle, their own interpretation and their own perspective given their era and society. I’ve really liked how George R.R. Martin has incorporated this into A Song of Ice and Fire because each character or source of information tells things a little differently. We are supposed to question and we are supposed to think some characters are biased or misleading. I hope I’ve achieved this in my own way.

Where I could I’ve also sprinkled in Scottish elements because why the hell not. Lakes are lochs, for example.

DJ: What was your favorite part about writing the The Dragon’s Blade: The Reborn King? What do you think readers will be talking about most once they finish it?

MRM: The most enjoyable aspect was also one of the most difficult. That was getting to write those pivotal scenes I’d been mulling over for years; this revelation or that showdown. It was exciting and surreal to finally have it down in a tangible manner but then the first drafts of it didn’t feel right. First drafts rarely do. It was challenging to work it to the point where it felt closer to the way I had imagined.

I’m not entirely sure what readers might talk about most. Perhaps people will be wondering how a certain demon character will fit into story going forwards? I’ll just be happy if people are talking about it.

DJ: The Dragon’s Blade: The Reborn King does have dragons (among other fantasy creatures) in it, so I’m going to take a guess that there is some magic thrown in there as well?

MRM: There are two extremes in magic systems. Those which give a ‘sense of wonder’ ala Tolkien and those which come close to just being a form of science such as Sanderson’s Alomancy. I tried to find a place smack bang in the middle. You might call it a ‘principled system’. There are broad rules and principles about what can be done but beyond that it is down to how much magical energy the user can process efficiently. The Cascade energy in this world affects the user much like a drug or alcohol does, granting you power (like a high) but it is ultimately poisonous and requires processing. For wizards this is their staff, working like an external liver. Without it they can’t draw on magic for fear of a rapid overdose.

I decided to work with the idea that destructive magic was ‘cheaper’ in energy than creation magic (healing and such). The analogy I use in the book is a hand woven tapestry. It takes a long time, a lot of skill, effort and overall energy to create a threaded tapestry but it only takes seconds to destroy if set on fire.

DJ: I feel it would be extremely foolish of me not to ask at least a couple questions of The Self-Published Fantasy Blog-Off #2!

When did you first hear about Mark Lawrence’s Self Published Fantasy Blog Off?

MRM: I actually first heard about the SPFBO from Ben Galley at the British Fantasy Con last year. Ben was very generous to sit down for a drink with me and have a chat about self-publishing, his experiences and share some advice.

DJ: What is it that you like about the SPFBO and what made you decide to submit your novel, The Dragon’s Blade: The Reborn King, to the contest?

MRM: I like that it is bringing attention to what is happening in self-publishing in a focused, steady manner; not just the odd one off post here and there. It generates a lot of positive discussion and maybe lets other authors and readers see that it can be done well. It also has the advantage of having greater credibility with Mark Lawrence as the organiser and the respected bloggers who take part. It really is a feat of love for the genre that these bloggers are willing to put in the effort.

The opportunity for amazing exposure is the primary reason for submitting but it also offers the chance, I hope, to make contact with other indie authors I wouldn’t have known about.

DJ: When I read, I love to collect quotes – whether it be because they’re funny, foodie, or have a personal meaning to me. Do you have any favorite quotes from The Dragon’s Blade: The Reborn King that you can share with us?

MRM: Well this one has personal meaning to me and will likely make more sense if you’ve read the book but it is my favorite; written late one night with pen, paper and lamplight as I struggled to sleep.

“Oh, but Darnuir, memory is the heaviest of all things,” Blaine began solemnly. “Even the strongest shoulders will be hunched by it in time. Nothing weighs upon us more, nor for longer, than memory.”

DJ: Now that The Dragon’s Blade: The Reborn King is released, and is part of the SPFBO 2016, what is next for you?

MRM: Working on the sequel! And keeping my fingers crossed for the SPFBO. I mean this to be a trilogy so there is a lot of work to do yet. I have more going on this year but book two is coming along nicely, although it definitely feels harder. Second album syndrome I guess. Hoping to go to more conventions, get myself out there and maybe get on some panels if I’m lucky. Right now I am most excited for my very first signing event which is scheduled for the 15th of June at Queens Park Books in London.

MRM: Blog and website combined: www.thedragonsblade.com I am trying to guest blog more right now but I will update my own blog with links to those when I do.

Vote for The Dragon’s Blade: The Reborn King in the SPFBO 2016 Cover Battle: 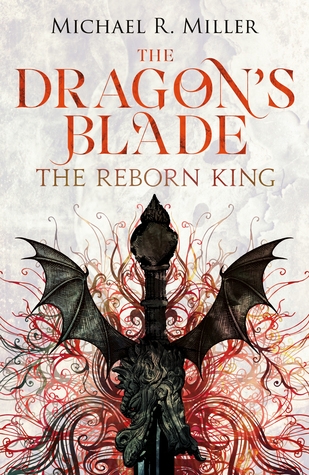 “A must read for fantasy aficionados” – Cover2Cover

“It will truly grip you” – The BandWagon

“Fantasy at its fast paced finest” – The Tattooed Book Geek

Dragons once soared in the skies, but that was before the Transformation, before they took human form. Now, demonic forces stand to obliterate them. When left mortally wounded, Darnuir, the Prince of Dragons, can only be saved through a dangerous rebirthing spell. He is left as a babe in human hands.

Twenty years later, Darnuir is of age to wield the Dragon’s Blade. As the last member of his bloodline, he is the only one who can. He is plunged into a role he is not prepared for, to lead a people he does not know. Shadowy demons ravage his new home and the alliance between humans, dragons and fairies has fractured.

Time is short, for new threats and deadlier enemies are emerging…

Michael was born and raised in Ayrshire in the West of Scotland. Being useless at kicking a football around, he often resorted to imagining tales of magic and adventure in which he and his classmates would battle to save the school during their lunch hour. Fortunately for all, such embarrassing tales never made it out of his head and onto paper.

Like many young boys he quickly developed a love for daring knights who battled evil. When this was combined with endless hours playing Age of Empires and watching Lord of the Rings, a love for both history and fantasy was born.

He studied History at the University of St Andrew’s, dabbling in everything from Ancient Rome to Modern Scotland and a good deal of things in between. Graduating in 2014 he moved to London to pursue law and somehow decided it was a good idea to start writing a fantasy epic at the same time.

He hopes you enjoy reading Dragon’s Blade as much as he has in getting it from idea to page to published book.