I know, I know; Boskone was almost 4 months ago now, but these book collection posts can take me quite a bit of time to put together! And, well, I’d kinda rather read or write a review of what I just read 🙂

Either way, here are all the books I got singed at Boskone 53! 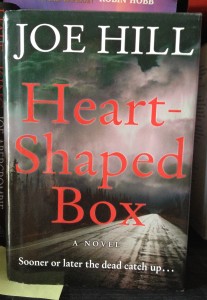 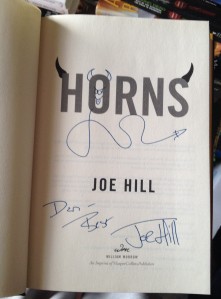 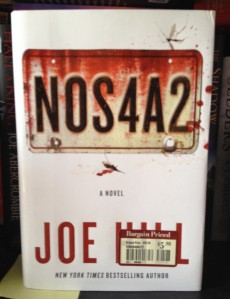 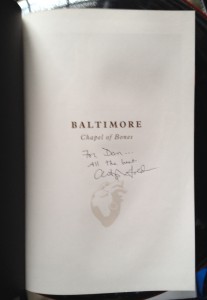 Joe Hill and Christopher Golden were the first authors I met at Boskone. They were at a table signing with another author (whom I will name in a second). There was one LONG, MASSIVE line, that was leading up to Joe Hill, so I thought, “Forget that, I’ll get Chris’ autograph first.” Christopher was an awesome guy and I had a great chat with him, and after him, I went to get in line for Joe.

I got in to what I thought what Joe’s line, but when Erin Underwood asked me who I was in line for and said Joe Hill, they said he didn’t have a line; this long line was for Garth Nix, and that I cutting half the line. My jaw dropped. Joe Hill had no line! Don’t these people know who he is?! XD 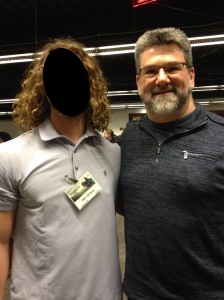 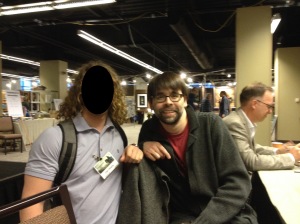 After previous author events, I always wished I had taken photos with all the author that I met and had gotten autographs from. So, I decided that this year was going to be different! However, after these two photos, I completed forgot to ask the rest of the authors XD 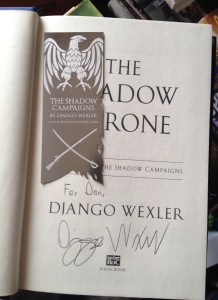 I was able to get Django Weller’s autograph, and if you look close at the center photo, there is a shiny metal bookmark. This was actually something special that Django brought to Boskone, special for people who brought him a copy of his books to sign 😀 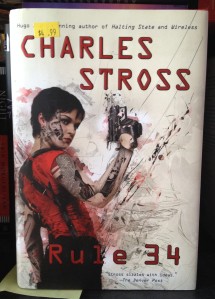 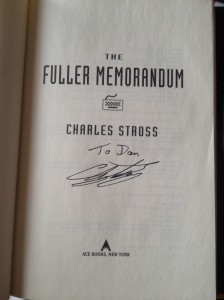 I have not read anything by Charles Stross before, but I do know he has won numerous awards, including the Hugo in 2014. Since I had a couple of his novels, figured it made sense to get them signed. 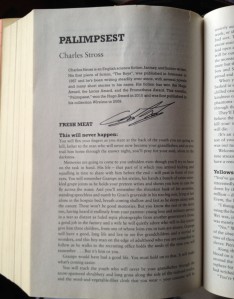 Not only am I going the epic Time-Traveler’s Almanac Read-Along, but apparently, I am also on a quest of my own to get this anthology signed by as many of the authors who have a story in it as possible! I was able to add Charles Stross, John Chu, and Garth Nix.

I actually met John Chu at Readercon in 2015, but forget that he a had story in the anthology! Needless to say, I was very happy when I saw he was going to be as this convention 🙂

Then, incase you haven’t realized it yet, after I got Chris’ and then Joe’s autographs, I did get in that epic-ly long line to Garth Nix to sign some books. He came from all the way over the ocean! Couldn’t pass that chance up 😛 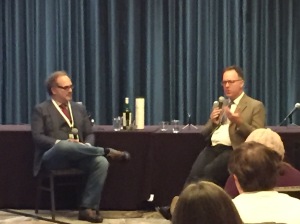 Garth Nix was also the Guest of Honor for Boskone 53, and these are two photos from his interview.

Another anthology I slowly collecting author graphs for is the Nebula Award Showcase 2014, and grabbed E.C. Myers’ and Ken Liu’s autographs.

I went to a reading & signing by Ken Liu, and see that red ticket stub there? That was for a chance to win a copy of his anthology was going to be coming out! I didn’t win

But I did get the autograph! 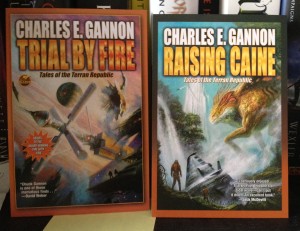 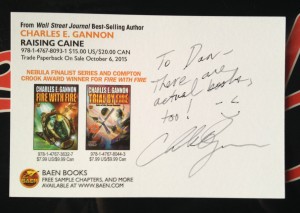 It might have seemed weird before when I said that Django Wexler was giving those bookmarks out only to people who had his books to sign. This was because he and some other authors have these poster cards for free also at their signings. One of these other authors was Charles E. Gannon.

Honestly, I felt really bad asking Charles to sign these – not having books, nor picking up a copy there – but each book in the series has been nominated for the Nebula! (The Nebula was actually announced earlier this same morning, with the third book, Raising Caine, getting nominated!)

Charles was a good sport about signing these though, and he took a little shot at it when it signed the first post XD But he also told me that Fire with Fire was for free on Kindle at the time, and that I should pick it up to see if I liked it. Well, I haven’t read it yet, but I did pick it up on Kindle later that night!

A third anthology I brought with me was The Best Science Fiction & Fantasy of the Year Volume Eight. E. Lily Yu was actually the first author I received an autograph from, in this book, but what I want to talk about is my chat with her.

When I ask her to sign the book, I also told her that I her short story, Women at Exhibition, was so cool(!), because of X, Y, and Z spoilers! She stopped and looked up me, almost bewildered like. I thought I had said something wrong (or got her story mixed up with another authors!) I was wayyyy off. She told me that, besides for he family and friends, I was the first person to ever tell her that they had read that story before. Now it was my turn to be shocked.

So, I want to tell all of my readers: GO READ Women at Exhibition by E. Lily Yu!!!

Read it at Uncanny Magazine: http://uncannymagazine.com/article/woman-at-exhibition/
and
Read my review of it: https://mylifemybooksmyescape.wordpress.com/2015/09/01/book-review-uncanny-magazine-issue-5-julyaugust-2015/ 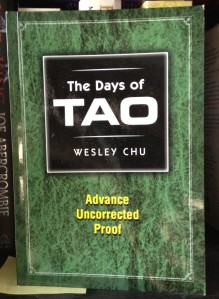 The other reading I went to was for Wesley Chu. Reading can be very hit or miss I’ve noticed, but the BEST author reading I have ever been to was done by Wesley! It was so great, that after it was done I wanted to tell him I enjoyed his reading, and that I also bought his novels online last year from his site and thank him singing them then.

Unfortunately, several other people wanted to talk/get his autograph after the reading. By the time I was up, he was running late for the next event he had, and told the people he was having a signing the next day though. I already had my books by him singed, so I wouldn’t be at that event, but I still wanted to tell him he did a great reading. I went up super quick, and shook his hand and said “I’ll be quick; Just wanted to say your reading was great, and I bought the trilogy off your site last year and thanks for singing it.” That was it; took a whole 5 seconds; he said thanks and you’re welcome; and that was it.

The next day, I was going to a signing for Richard Anderson, and as I was coming off the escalator, I walked past Wesley, and he said, “Hey! Come here for a second!”

At his reading, he was also giving away an ARC for his new novella, The Days of Tao. He had two, and was saving one for the event after that. Turns out, he forgot to give that second ARC away at the next event, but remember that I had talked to him and said I bought his trilogy, so he had book looking around for me, so he could give me the last ARC! HOW COOL IS THAT?!

I was speechless when he pulled the book out of his bag and told me that. I felt incredibly lucky, and am extremely grateful for that. Thanks again, Wesley!

In the book dealers area, I came across a new magazine, Strangelet. I had just been bouncing around tables, look at what was here and there, and me and the guy behind the Strangelet table started talking. It came up that I did run a blog (I really need to make some “business” cards) and he told me that was the editor for the magazine and offered me a review copy of volume 1! I am very behind in review it, but in the next couple of months, I will have a review posted, and possibly an interview with the editor too!

Yep, it is my SFWA Cookbook again 😀 Honestly, I didn’t know who James D. McDonald was, but I saw his name on the author signing list, then found him in the cookbook, and decided to get his autograph too!

James was quite an individual! Supper friendly, talkative, funny! Great guy! If you don’t own a copy of the cookbook, click on second picture and read his into paragraph. It tells how a good shot story is like a good pie – and it awesome-ly funny.

Anyways, he a recipe for a Lime Pie, and he was super excited when I asked him to sign the book, and I told him that me and my girlfriend would probably make it soon. He gave me his card and told me to shoot him an email after I made it, to let him know what I thought.

Well, that day is soon. I haven’t forgotten about that Lime Pie James had been talking up, and we are going to make it this weekend!

We you are Boksone 53 earlier this year? Been to any author events lately? How a good experience you’ve had with an author?

Side Note: If you’ve read a story by an author and you’ve liked it. Tell them. It can go a long way.