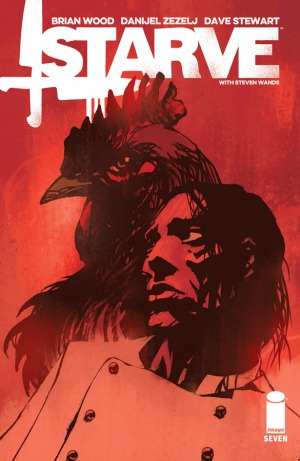 The street finds its own uses for things, even black market greens, urban chicken farms, and off-brand fast food joints.

Very, very powerful issue. Gavin’s plan of opening his own chicken-shack, may have seemed like weird thing to do, and needing Dina’s help to do it ; but his reason was genius, and getting Dina’s help, may be the key to pulling it off. Also, Angie is becoming a star of her own.

Like father, like daughter; Angie won the last episode of Starve. After this win, the networks took notice and not only wants her on the show, but wants her have her own book, tour, endorsements… You could “she’s becoming more like her father”.

Gavin, after taking over the chicken shack (if only it were called Mr. Clucks!!!!), bring in the two former chefs from the Starve that he teamed up with in the Kitchen Battles, to teach his fast food chefs how to cook, while he is out on town learning where to get his “fresh”food from… and the joint in opening up tonight.

Let’s start with Angie: I was not happy for an instant that the network wanted her that badly and for so many things. She is going to be walking the exact same path that Gavin did. I can only hope that walks it better. Whats going to be curious is how Greer; Shane, and Gavin take this news. Greer isn’t in this issue, but think about how much hate she has for Angie, that fact that she is taking her father’s place, she probably is going to be none to  happy about that. Shane and her are in relationship, but with her working for the network now too, there would be a conflict on interest. Then Gavin… will he proud of her? Encourage her to do it or stay away? Will be afraid that the network will ruin her life as well, or will he think that she can do better than he did? I have no idea about any of these, but I cannot wait to see Greer explore (which I sure she will), and I haven’t a clue how Gavin will handle this news.

The power from issue comes from Gavin shopping around the town. Maddox, the janitor of seven years, Gavin promotes his to day manager, and asks him to show him where he can get local fresh food. Maddox takes him to “Los Hermanos” where they sell cheep live chickens… but that are cage raised and fed with cheep processed, industrial sized food bad. Gavin reaction is horrific at first, but Maddox explains that in this neighbor, these cheep chicks ar the best some mothers can afford to “splurge” on her family for a night, however, if he buys all his chickens from here, in a short time, Los Hermanos will be able to afford better food, and be able to buy the place out back to raise the chicken in better conditions. This same logic goes when Maddox introduces Gavin to their fresh fruit supplier.

What is the point of all this? Buy buying from local places, Gavin will be giving the money that they need, to be able to buy “fresher” foods, and have better resources for their products. The real goal here is to give power back to the 99%. He is going to open up a chicken shack fast food joint, and serve “1% quality” food, for dirt cheep prices, all from the food their people can buy right on the street. He is going to stick it to the rich and wealthy.

Sounds great and I am totally supporting Gavin on this – showing the people that they too can eat great meals that are cheep – but you have to wonder how the network is going to feel about his new business. Partially because of his contract with them.