*Nicole Cushing was kind enough to provided a free ebook copy of The Sadist’s Bible to go along with her interview! The link and details for the giveaway are located at the bottom of the post, following the interview 🙂

Today I am interviewing Nicole Cushing, recent 2016 Stoker Award Winner, and author of the new horror novella, The Sadist’s Bible.

DJ: Hey Nicole! Thanks for stopping by to do this interview!

Nicole Cushing: I write dark horror fiction. Really dark horror fiction that strives to be well-written and emotionally realistic. My fiction has been described by reviewers as being both “brutal” and “cerebral”. I often find myself compelled to write about traumatic experiences and their aftermaths. Addiction, homelessness, and mental illness often appear in my fiction, but strange mystical entities do as well.

I live in a working class subdivision in southern Indiana (near the border with Kentucky). I’m originally from Maryland, but I’ve lived in this so-called “Kentuckiana” border region for almost thirteen years now and often use it as a setting for my stories.

DJ: What is The Sadist’s Bible about?

NC: The Sadist’s Bible is about two women–Ellie (a married, closeted Bible Belt lesbian in her late thirties) and Lori (who is in her early twenties and bisexual). These two women live in separate parts of the country but meet on a social networking group catering to people who want to form a suicide pact. They find that they’re attracted to each other, and come up with a plan to drive to a hotel halfway in between their houses where they’ll have a decadent night of sex and then off themselves.

But Ellie doesn’t really know Lori that well. And it turns out that Lori is hiding a lot from her, including a hideous set of entanglements with a truly wicked cosmic force.

DJ: What were some of your influences for The Sadist’s Bible?

NC: This may surprise people because The Sadist’s Bible is quite explicit in places, but one of the influences was Shirley Jackson. Ellie is intended to be a bit of an homage to Eleanor (the protagonist in Jackson’s The Haunting of Hill House). In that book, Jackson did a superb job of depicting Eleanor’s anxiety and eventual falling to pieces. I didn’t want Ellie to be a carbon copy of Eleanor, but I wanted her to have something of the same feel to her.

Other influences include Thomas Ligotti as well as various old Greek and Christian stories.

DJ: What is the world of The Sadist’s Bible like?

NC: Most of the book takes place in our own world. (Specifically, in southern Indiana, Kentucky, and Virginia.) In other words, the Bible Belt. The culture of the Bible Belt plays a large role in the story. It shapes the social mores that Ellie, in particular, is trying to escape from.

But part of the story takes place in a mystical realm. (To avoid spoilers, I won’t divulge much about that place.)

DJ: Could you briefly tell us a little about Ellie and Lori? Do they have any cool quirks or habits, or any reason why readers with sympathize with them?

NC: My hope is that readers will be engrossed in Ellie and Lori’s struggles because they find them presented in a way that’s emotionally realistic. Even when everything else in the book is nightmarishly unreal, the pains and yearnings of my characters are intended to be powerfully real.

Lori has been sexually traumatized. Ellie is sexually repressed. Both of them are more than a little broken inside and that brokenness isn’t helped when they become entangled in one another. While this makes the book unpleasant for some readers, many others seem to understand the need for fiction to honestly confront emotional pain.

DJ: What was your favorite part about writing The Sadist’s Bible?

NC: Every reader interprets the book in a slightly different way. But from what I’ve seen so far on Goodreads, readers are talking a lot about how damned disturbing it is. (If you’re looking for pulpy action-adventure monster killing, look elsewhere.) They also seem to be talking about the depth afforded to the characters, which pleases me a great deal.

DJ: When I read, I love to collect quotes – whether it be because they’re funny, foodie, or have a personal meaning to me. Do you have any favorite quotes from The Sadist’s Bible that you can share with us?

NC: I’m going to decline to answer that for two reasons. First, some of my favorite lines in The Sadist’s Bible would reveal spoilers. Secondly, I try to avoid public self-congratulation. I’m more comfortable with letting readers and reviewers talk about what quotes they liked.

DJ: The Sadist’s Bible is a novella, and with the exception of Mr. Suicide (which I will ask about in the next question), all of your works have been short story to novella length. It seems to me like novellas have gained a rise in popularity again recently: what is it about the novella format that you like? Do you feel there is a particular advantage to telling your story that way over the novel?

NC: As a reader, I’ve long been annoyed by authors who pad a book with dull, inessential fluff or repetitive action sequences just so it reaches the magical 80,000 or 90,000 words a corporate publisher wants.

My hunch is that many novels would work better as novellas. I want my writing to have a significant emotional impact on the reader and that impact is more difficult to sustain over the course of three hundred, four hundred, or nine hundred pages. Brevity gives a story focus. Length often dilutes the story’s power.

So when I started to write fiction I made a promise to myself that I would never pad a book and let down readers in the same way I’ve felt let down before. So far, this is a promise that I’ve been able to keep.

That must have been such an incredible feeling! What was your reaction and how did you feel when they called your name?

NC: Before I answer that question, I should probably first explain that being a nominee at an awards ceremony is a bizarre experience because your success or failure is hidden from you until the point when the verdict is announced from a stage, into a microphone, to a crowded room of your peers, and broadcast internationally via the Internet! If you think about it, there’s no other situation in publishing quite like that. (Can you imagine if publishers handled short story rejections that way? Publicly announcing, at a grand ceremony, not only the Table of Contents but also the authors who came just shy of succeeding?!) Anyway, it was a real emotional challenge for me to keep an even keel under those circumstances.

I had been nominated for a 2013 Shirley Jackson Award (and lost) so I knew better than to count my chickens before they were hatched. I tried to get myself into a frame of mind of bracing for a loss. (Better to go into it expecting failure, I told myself, than to expect success and not get it.)

When my name was called, I felt numb! I had made a list of people to thank in the event I won, but I never anticipated it would actually get used. I think I got through the whole acceptance speech thing well enough, but it was all a blur. Probably the best part of that night was looking out from the podium and seeing my husband out in the audience, flashing a grin as big as Texas. That’s one of the most special moments of my life.

DJ: Could you tell us a little about this award-winning novel?

NC: One of the most helpful ways to think of Mr. Suicide is as a strange hybrid of J.D. Salinger’s The Catcher in the Rye and Edgar Allan Poe’s “The Tell-Tale Heart”. It’s a story about a severely depressed teenage boy and his repeated failures to connect with others. It’s about his twisted family, and how they only make matters worse. It’s about his road to adulthood (a road paved with abuse, violence, and…ultimately…murder). The book was praised by Jack Ketchum, and one reviewer likened its tone to that of the more disturbing works of the Marquis de Sade. Suffice to say, there’s no sugar-coating. It’s a book that looks misery, squalor, and brutality in the eye (not to celebrate such aspects of life, as de Sade apparently did, but rather to mourn them).

DJ: Now that The Sadist’s Bible is released, what is next for you?

NC: I’m working on a new novella that I can’t talk a lot about quite yet. After I finish that I hope to take a little bit of a breather and then get back to work on my next novel. I also hope to be working on nonfiction pieces for various magazines in the near future.

Small presses such as these are vital to continuing horror’s longstanding role as an oasis for readers who aren’t shiny, happy people. I suspect many of my readers have had firsthand experiences with the ugliness of the world, and know they’re not going to find this ugliness acknowledged in the books trotted out by corporate publishers. So I think of my work as a noble calling.

*** The Sadist Bible is published by 01Publishing and available TODAY!!! ***

Please click on the Rafflecopter link below to enter to win an ebook (.mobi) copy of The Sadist’s Bible by Nicole Cushing! Good luck! 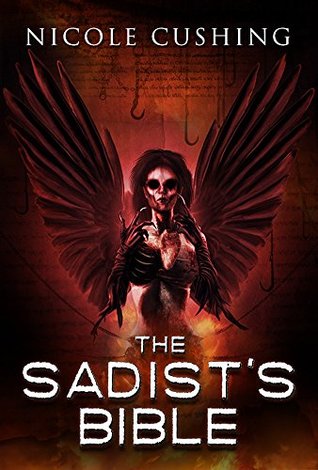 How well do you know the people you chat with on a social network?

Thirty-seven year old Ellie Blake is about to find out. Her Bible Belt community wouldn’t dare accept her if she came out as a lesbian. Her husband, her pastor, and her neighbors would be scandalized by such a disclosure. But Ellie’s desire for another woman’s intimate touch grows stronger with each passing day, as does her desire to be dominant – to tell another woman just how to please her, to tie up another woman so that she’ll never, ever leave.

Ashamed of these feelings and hopeless of ever satisfying them, Ellie goes to a secret group on the social network and seeks out a partner for a suicide pact. There, she finds twenty-four year old Lori Morris–a woman who also claims devotion to death and lust. She agrees to meet Ellie in a hotel for an intense night of decadent sex and torture before suicide. But Lori has another agenda, too: to escape an oppressive force that might be God or might be the Devil. A force that even suicide may not allow her to escape. A force that wants Lori, Ellie, and all of humanity broken and brought to its knees.

Nicole Cushing is the Bram Stoker Award® winning author of Mr. Suicide. She has also written the Stoker-nominated short story collection The Mirrors and three stand-alone novellas (including her Shirley Jackson Award nominated book Children of No One).

Various reviewers have described her work as “brutal”, “cerebral”, “transgressive”, “taboo”, “groundbreaking” and “mind-bending”. This Is Horror has said that she is “quickly becoming a household name for horror fans”. She has also garnered praise from Jack Ketchum, Thomas Ligotti, John Skipp, S.T. Joshi, Poppy Z. Brite, Ray Garton, Famous Monsters of Filmland, and Ain’t It Cool News.

A native of Maryland, she now lives with her husband in Indiana.

One thought on “Author Interview and Giveaway: Nicole Cushing”